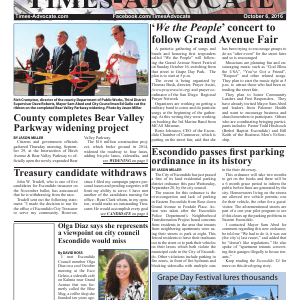 Dear David Ross, editor, Times-Advocate: Thank you for allowing Rincon del Diablo MWD the opportunity to provide information on our current efforts to become a sewer agency. We believe it is important to provide background information and explain the process accurately and objectively. The Rincon del Diablo Municipal Water District (District) held a public scoping session on September 22 on […]


First Congregational Church of Escondido welcomed its new pastor Sunday, the Rev. Holgie Choi. Pastor Holgie delighted all ages with balloon, seeds, energy and stories. He came here after serving 8 years at the United Church of Christ in Acton, MA. 10:00 a.m. Sunday Worship is at 1800 North Broadway, Escondido. Pastor Holgie will be teaching a class on Bonhoeffer’s […]

~ LETTERS TO THE EDITOR


A TWO-SIDED ISSUE Editor, Times-Advocate: Every few days there is a shooting of a black man by the police. Rabble rousing groups rush to the area and the whole issue becomes confrontational. Violence and smashing things follows. The mob demands something immediately. No matter what is released, it isn’t going to satisfy the mob. I don’t think anything will satisfy […] 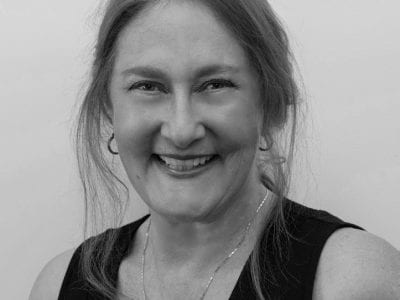 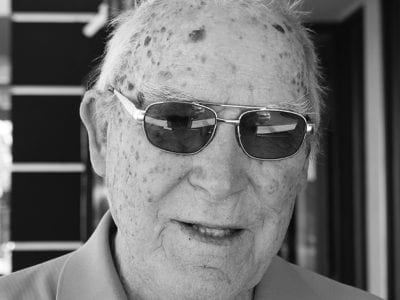 I want to talk today about two somewhat disparate subjects: a brief history of ownership of the former Daily Times-Advocate and its weekly T-A forerunner; and an anecdote from a visit by a U.S. senator. Times-Advocate Ownership As it might be obvious, the Times- Advocate was a merger of two newspapers way back in the 1880s – when Escondido was […] 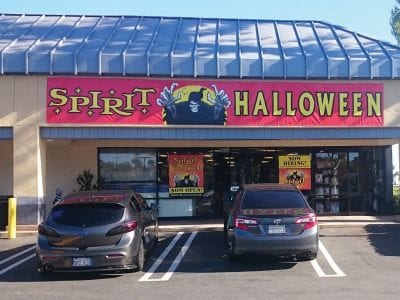 The autumn greets many things in North County. For Escondido it means the opening of Bates Nut Farm’s grand pumpkin patches, hayrides and corn mazes. Along with phantom Halloween costume shops that magically fill vacant storefronts and disappear just as swiftly upon the conclusion of the Day of the Dead. You can always recognize these shops by their bright orange […] 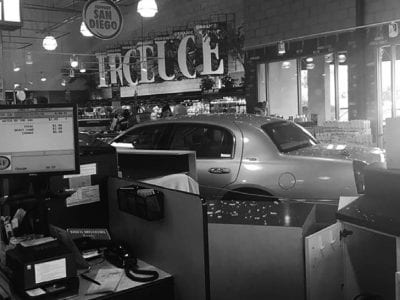 
Tuesday afternoon customers at Jimbo’s were startled when an elderly woman driving a sedan blasted through the front door and into the produce department. The driver was OK, just shaken up and no one was in her path. The crash took out the customer service counter and pushed the apple bin back several feet. 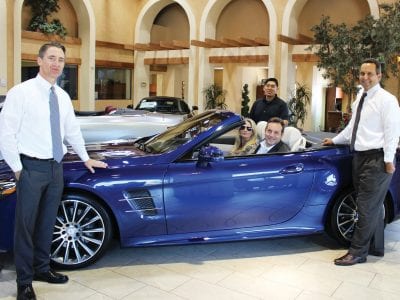 Jason Cestaro, the ebullient, boyish general manager of Mercedes-Benz of Escondido, has a luxurious, spacious office — but he doesn’t spend much time in it. Instead, he is constantly on the move of the floor of this large car dealership that recently won the 2015 Mercedes-Benz “Best of the Best” Dealer Recognition Award and just a few weeks ago copped […]


Elks Lodges, working in conjunc­tion with Chili’s Restaurants in San Diego County, are sponsoring a fun­draiser for the Elks National Founda­tion October 10 and 11, from 11 a.m. to 10:30 p.m.. With each event flyer presented at the time of purchase, Chili’s will do­nate 15% of their event day sales back to the Elks National Foundation. Taking the lead in […]