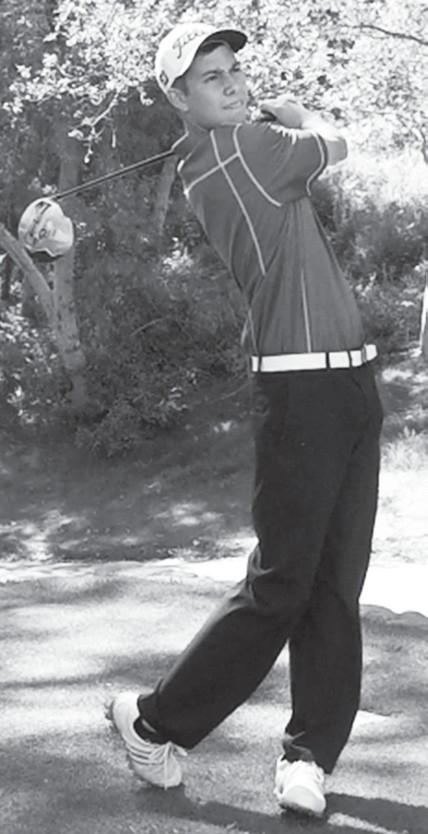 Valley Center was once home to one of Hollywood’s most recognizable figures, Gary Cooper. The iconic Cooper was lean, with a folksy manner and a believability that was hard to match. In so many ways, Cooper projected the image of being the real deal.

Nowadays, there’s another Cooper making a name for himself in and around the Valley Center area. Like the late actor, he’s lanky, unpretentious, likeable, easygoing and economical with his words. He gives off the vibe of being, at his core, a humble and relatable soul. Only this “Coop” isn’t known for what he can do in front of a camera or how he looks on the silver screen.

Rather, this particular Cooper is carving out a niche for himself on a stage of a different sort, the vivid green pasture of a golf course. Just like Gary Cooper could make some wondrous things happen on celluloid, the young man who shares his surname can do the same on the links. In short, whether it was Gary in a shootout or this other Cooper on a fairway or green, both have shown that when a crisis point was reached, neither was inclined to blink or give ground. Each, in his own way, has proven himself to be one formidable hombre.

The fact that Michael Cooper has forged a reputation as being someone to be reckoned with is rather remarkable given that he’s still just a colt, a mere 15 years old. But already, at that tender age and just a sophomore, he’s become the top dog and go-to guy for the Valley Center High golf team. In a world where it’s very unusual for anyone so young to be the preeminent player on a prep team in any sport, Cooper has clearly taken that sizeable step, which in itself is no small feat.

Last year as a freshman, the slender 6-1, 145-pounder got his feet wet at VCHS, acclimated himself to a new brand of competition and finished the season with a strong kick. Now, well into his second season of varsity play, the precocious linkster has taken a quantum leap forward and reached some impressive heights.

In addition to seizing the mantle as the Jags’ undisputed number-one player, Cooper has been posting some notable results. In the 13 matches in which the Jags have participated, “Coop” has been quite prominent, winning match medalist honors a striking five times. Add that to the fact that this past March, in the highly-regarded City Cup Invitational, Cooper was a standout, finishing second in the overall individual competition. Impressive outcomes such as these have greatly raised the bar when it comes to what’s expected of Cooper moving forward.

Because he’s become such a rock, the Jags have understandably come to rely on his amazing consistency. Thus far this season, the trustworthy soph is carrying a glossy 2.46 stroke differential (handicap). Moreover, his scores have little variance. You can count on Cooper to keep his 9-hole match total somewhere within the tight range of 35 to 39. That’s some pretty nifty shotmaking.

So given his still rather youthful status, just how good can Cooper become and what kind of legacy can he leave? His coach Rick Darland, who has been at VC either as an assistant or head man for 10 years, feels that Cooper is already one of the school’s all-time signature players. “Right now, he’s right up near the top,” Darland explains. “But if he continues to progress as he has, which I fully anticipate, then there’s little doubt he’ll become the best we’ve ever had here.”

Cooper’s emergence as such a legitimate and potent force is based on a game that while not necessarily spectacular or dominant in any one phase, is special because of its versatility and many-sided nature. Simply put, he’s skilled across the board. “He really doesn’t have any noticeable weaknesses,” confides Darland. ‘He’s just got a very good all-around game.”

When asked what makes him such a dynamite player, Cooper provides a somewhat surprising answer. He doesn’t talk about his swing, technique, specific shots or course management. What he does emphasize is his mindset and an unrelenting work ethic. “I believe my biggest strength is that I’ve developed a mental edge,” Cooper reveals. “I don’t let many things get to me or mess me up.” His coach couldn’t agree more when it comes to his charge’s focus and toughness upstairs. “Though he’s awfully young, he got a knack for excelling under pressure,” Darland shares. “He just seems to do really well when it matters the most. He’s a very competitive and determined kid.”

And when it comes to paying the price and going above and beyond, be it on the range or playing countless holes once team practice is over, very few, if any, have a resolve that matches Cooper’s. “He’s a coach’s dream in that regard,” says Darland. “He’s so driven and so willing to train on his own.” Cooper admits to being a workaholic and practice junkie. “Every chance I get, I’m out there trying to get better,” he relates. “I practice much more alone than I do with the team.”

When breaking down the various facets of Cooper’s game, there’s plenty to like. To begin with, he has a solid stance that slightly opens or closes predicated on the type of shot he’s preparing to hit. His takeaway is subtlety inside-out and it produces a tempo that is fluid and rhythmic. Cooper’s swing has a good arc and at its apex, the desired position of being parallel is reached. He imparts a nice and gradual draw on almost all the balls he hits.

Off the tee, he consistently bombs it in the 280 to 290-yard range. His drives start out on a low trajectory before gently rising upward and then peaking rather majestically. With the hybrid, he stripes it, repeatedly hitting the ball as pure as can be. How about his long iron play, which many believe to be one of the tougher aspects of golf to master? Revealingly, Cooper considers this challenging area to be his strongest suit. “It’s probably where I’m best,” Cooper informs. “Because I hit those shots much lower, there’s less room for them to go off-target.”

“Coop’s” short iron proficiency would be classified as being very sound as would his chipping around the green. And when it comes to his putting, this is where Cooper has made the most significant inroads. Through diligence and constant honing and refining, his putter is becoming more of a weapon. As a frosh, Cooper had a tendency to leave putts either too short or run them by too far. Now, having gotten a more precise feel for the proper pace and speed, his handiwork on the greens has become much more of an asset. “I’ve gotten a lot better with my putting which has led to better scoring,” Cooper states.

When observing Cooper on the practice range, one takes note that his current physique is still a work-in-progress. Clearly on the slim side, he seems to swim a bit in his aqua-colored team shirt and loosely fitting black pants. Obviously, he still has a lot of growing to do and Darland figures that Michael will fill out nicely in the next couple of years, which should only enhance his power and strength. Cooper is aware of the construction his body is undergoing. “It’s kind of weird,” he says, “but almost every week I can feel a change and can’t help but see how I’m hitting my clubs a bit further.”

Because he is the Jags’ key component and leader by example, Cooper realizes it’s a prerequisite that he perform up to expectations if his team is to be a real factor in the challenging Valley League, which includes heavyweight schools like Fallbrook and Ramona. Currently sitting with a 4-2 league record and situated in third place, VC must have Cooper at or near his best in order compete successfully. “I know I’ve got to score well to really help my team” he admits. “I’ve got to be super focused. I can’t afford to slack off.”

By the time this current season ends, Darland expects his burgeoning sophomore star to have made first-team all-league and to have, hopefully, made his presence felt in the upcoming Valley League and CIF tournaments. Beyond that, Cooper has his sights set on making some noise at the next level. Michael has already begun contacting college coaches in search of finding the best and most suitable school for him. And don’t rule out a run at being a PGA pro. “Someday, I would love being on the Tour,” he reflects. Sure, that’s a mighty big ambition but given Cooper’s talent, commitment and tenacity, nothing can be ruled out when it comes to this dedicated young man.

Gary Cooper’s most memorable day of trial came at high noon on a dusty street in some fictitious western town, when he went out to confront the bad guys as well as his fate. Though Michael Cooper’s moments of truth don’t have such dramatic consequences, he’s similarly required to prove himself against stiff competition. But he must also take on a foe that can be even more difficult to vanquish, the golf course itself. Generally speaking, the smooth-swinging Cooper gets the drop on both.