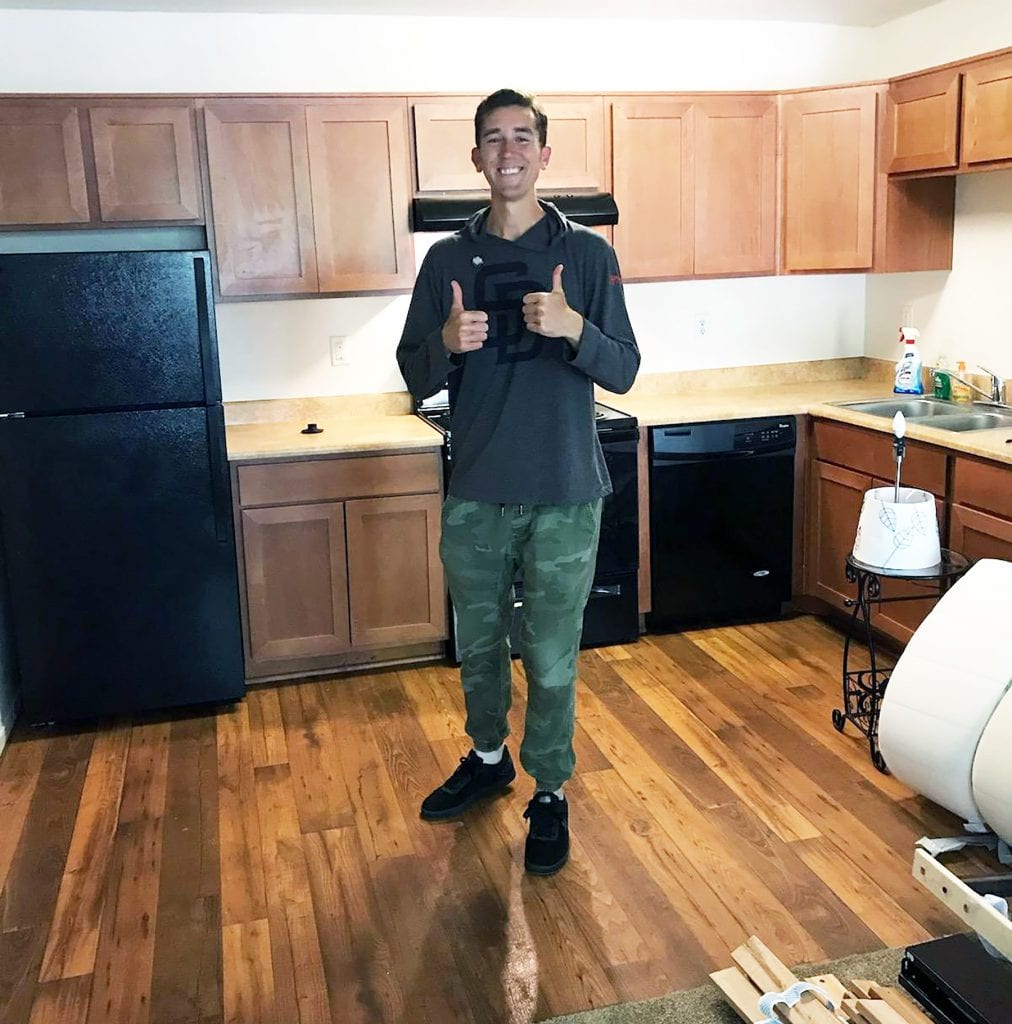 Formerly homeless, young Gus Kyriopoulos has moved from the street into an apartment, thanks to the PERT team and Interfaith’s emergency shelter, Haven House.

Gus Kyriopoulos is a formerly homeless young man, who went from the streets of Escondido to his own apartment last week. He is, in his own words, “healthy and housed!”

It was a community effort between the PERT (Psychiatric Emergency Response Team), Interfaith’s emergency shelter, Haven House where Kyriopoulos started after his hospitalization.

Kyriopoulos, 29, is bipolar and has Schizoaffective disorder. Gorman told The Times-Advocate: “I determined he was a good candidate for a POFA (Project One For All) voucher, the county’s Section 8 program for homeless individuals suffering with a serious mental illness and helped him with the paperwork. When he maxed out his days at Tikkun, Timika found him a bed in Carlsbad at the Catholic Charities men’s shelter La Posada.”

Kyriopoulos moved from there in to his Escondido apartment where he can attend all of his appointments and group meetings at the MHS clinic. His apartment is more than a studio. It has a bedroom, bathroom, living room and kitchen. “I’m enjoying it,” he said about his new home. “I’m very fortunate that I had so many people to help me.”

He was on the street when in January 2018 he found Interfaith. “I had been living with my family when my mom went to Texas and I was left without a home.” He had been “couch surfing” in friends’ homes for several years before that, and was homeless in Los Angeles County

I found out about Interfaith and they took me in to Haven House,” he said. “I’ve been through their program, which allowed me to qualify for Section 8, Interfaith, Mental Health Systems and then Alpha Project. I’ve been trying to get disability for about four years. I went to the stage of being in front of a judge. I’m appealing.”

Meantime, taking the proper medications, he’s recovering his health and is dealing with his symptoms. “I have some confidence,”  Kyriopoulos told The Times-Advocate. “When I returned to the workplace I had a lot of struggling with my symptoms. It is because of Interfatih and Haven that I was connected with others who gave me a while different perspective.”

He adds, “I’ve been hooked up with psychiatrists and therapists and a good routine of medication. I hope my story inspires others and shows that if you go through the program and respect the people and the program that there is a lot of hope and positivity.”

“In this situation you could really see all of the North County resources coming together for a success story,” said Gorman. “He [Kyriopoulos] will remain on my caseload so I can assist him with this transition and make sure he continues to be a good tenant and neighbor. I would like to see more North County landlords and property managers willing to accept the section 8 POFA vouchers because it improves the community by helping reduce the homeless population and giving individuals who may have a lot of obstacles the opportunity to have permanent stable housing.”

Gorman added, “Unfortunately there is a lot of negative stigmas associated with mental health and homelessness. On top of that there aren’t enough shelter beds and many of my clients sleep on the street or in their cars while waiting for their voucher and then when it is time to lease up they may not present well. The homeless men, women, and families in the North County face a lot of hurdle trying to break out of chronic homelessness. It is so good to see the system work how it is supposed to and be able to help people.”