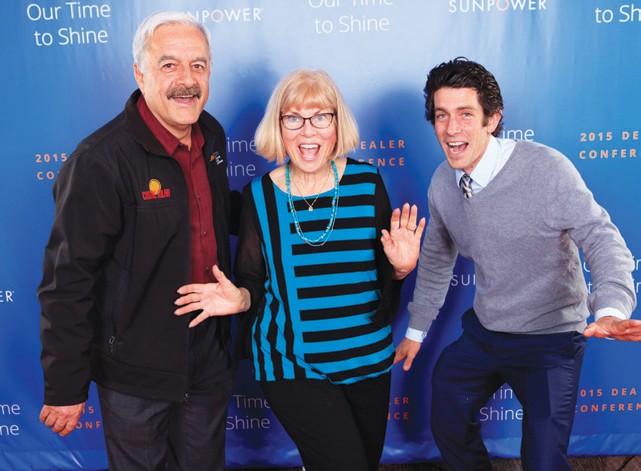 Ken Johnson, President of the Solar Energy Industries of America, SEIA, reports as part of its annual nationwide Environment Poll, that Gallup has just released important new data: 91% of Americans believe the U.S. should place more emphasis, or the same emphasis, on Solar Energy.

The poll showed bipartisan support, with 70% of Republicans and 82% of Democrats favoring increased growth of the Solar Industry. Solar was the only energy source that saw an increase in favorability over Gallup’s 2013 poll.

The State of California started giving incentives for installing Solar Electric and Solar Hot Water about 10 years ago. The state rebate money finished in early 2015 for Residential Solar. There are still rebates for Commercial Solar, but it is close to the end.

The Federal tax credits are still good through the end of 2016. We are talking about actual credits used to reduce your federal tax burden. Judith Shadzi, Vice President of Cosmic Solar, Inc., a VC-based company that has installed close to 300 in Valley Center, and over 1,000 solar systems in the county, told the Times Advocate, “These are actual taxes back. It’s thirty percent of the cost of the system and you get it back from the federal government. Currently it is available for both residences and businesses until the end of next year.”

Those credits mean that your solar system is nearly one third cheaper than it might be a year and a half from now. That’s plenty of time to take advantage of the credit, but not so far away that you shouldn’t get started. The system must be fully installed and in operation before the deadline.

Cosmic Solar makes sure that customers know about this great way of saving money. It’s in the contract!

Today it’s easier than ever to get financing for your solar power system. Many more banks and credit unions offer such loans. There’s also the HERO (Home Energy Renovation Opportunity) financing program. The repayment of HERO Financing is included in your property tax bill, which is delivered and collected by the county. You will see a line item titled HERO financing on your property tax bill. If you make property tax payment through an impound escrow account, your lender will adjust your monthly payment to include the amount due for HERO Financing. Because of this, the loan, which is a 20- year loan, goes with the house.

If you install your solar system in January, for example you don’t have to pay anything until you get your prop- erty tax bill in April.

“The most popular loan is through an Equity Line of Credit,” said Mrs. Shadzi. “You can pay yourself back for your home solar system in about 3.5 years now. The HERO program is also very popular.”

Another popular option is Solar Leasing. Cosmic Solar is a SunPower dealer. SunPower is a California manufacturer with a very high quality panel. This is a 20-year program where you don’t actually pay for the system; instead of paying the electric company you make a payment to SunPower every month. “Currently the payments are 20 to 60% percent less than what you pay the power company. As the price of electricity goes up your price stays the same and your savings increase over the years,” she said.

SunPower is a California manufacturer with a very high quality panel. SunPower’s Leasing program is for homeowners only.

Solar systems have a 25-year-warranty, but the systems last a minimum of 30 years and when you lease a system all maintenance is included and the power production is guaranteed for the entire time.

The type of solar technology Cosmic installs is a photovoltaic panel that generates electricity. “The solar panels are a pretty mature technology,” said Mrs. Shadzi. “It’s not like electronics. In the eight years we have been in business we have seen electrical generating go up by 100 watts per panel. They are doing a lot of research on storage batteries. That’s where the technology is going to improve in the future.”

Their first system was 160 watts and now it’s 260-327 watts per panel. Panels are 3X5 feet. An average home takes about 20 panels, if you are going to generate all of the electricity you will need. Some homes use 40-50. Typically in Valley Center half of the panels are ground racks.

Currently it takes about 90 days to install a system, which includes a month to get the permits and order the equipment.

Currently Cosmic Solar is looking to expand its staff of 15. “We are always looking for talented people to help us install. We are looking for two installers and an assistant for our operations manager,” said Mrs. Shadzi. “If anyone is interested, please send your resume to info@cosmicsolar.com.

Cosmic Solar is number one for customer service in Solarreview.com, the most reliable Website for solar companies. It has over 100 perfect reviews.

Cosmic Solar is a member of CALSEIA (California Solar Energy Industry Association) a consumer advocate group with the state. Many solar companies are members of CALSEIA, which fights for “solar rights” such as laws that say that everyone has the right to install solar. “An HOA can’t stop you,” said Mrs. Shadzi. “They have their bylaws, but Cosmic Solar works with the homeowners associations.”

CALSEIA is also the advocacy group that provided the wording for the solar rebate program. “Arnold just signed it,” said Mrs. Shadzi.

Originally California law called for a 2.5% ceiling of the state’s electricity to be generated by solar. CALSEIA lobbied for 5% and won.

San Diego Gas & Electric (SDG&E) is of the opinion that the state will reach that 5% threshold next spring. When that happens things such as how much it costs to connect to SDG&E’s power grid will be renegotiated as well as how much it pays customers who put more electricity into the grid than they use. But that will only affect the new solar installation.

To find out more about how you can start generating your own power using the sun, visit Cosmicsolar.com, call 760-749-1111 or email info@cosmicsolar.com.