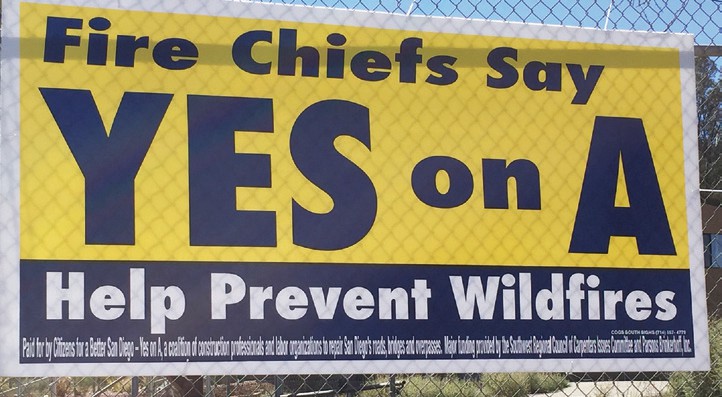 These signs are being posted all over North County.

Some supporters are posting signs around Escondido and other North County and backcountry communities that claim that the 1/2 sales tax proposed by SANDAG, Measure A, will help prevent wildfires. The signs read “Fire Chiefs Say Yes on A to Prevent Wildfires.”

The Times-Advocate spoke to Don Butz, current president of the San Diego County Fire Chief’s Association, who confirmed the fact that the association is officially neutral on the measure.

One fire chief in this area, Joe Napier of the Valley Center Fire Protection District, told the paper that the 1/2 sales hike would do little if anything that would help fight wildfires, and nothing at all for local fire departments.

Instead of being an anti-wildfire funding mechanism, Measure A is a SANDAG Infrastructure Tax Measure to fix roads, widen freeways and build buildings. Nowhere in the measure’s language is fire prevention mentioned. Some environmental organizations claim that the measure would actually encourage wildfires.

The fire chiefs association received a presentation from the architects of this measure and voted to not support and stay politically neutral on this measure.

There is no organization of fire chiefs that is supporting County Measure A. If you look on the Yes on A website you will look long and hard to find ANY fire official supporting it.

However, if you look at the bottom of one of the large signs that have been erected around Escondido you will find: “Paid for Citizens for a Better San Diego. Yes on A, a coalition of construction professionals and labor organizations to repair San Diego’s roads, bridges and overpasses.” It also says “Major funding provided by the Southwest Regional Council of Carpenters issues committee and Parsons Brinkerhoff Inc.” In other words, the people putting the signs around the county are construction worker union members. The sign certainly makes that last part very condensed and hard to read. You have to get out of your car and stand next to the sign to read it.

In July 13 of the 21 members of the San Diego Association of Governments (SANDAG) board voted to put a ½ cent sales tax on the November ballot for San Diego County residents to vote on. Escondido’s representative on the board, Mayor Sam Abed, voted no.

The measure, if approved, would put the tax on all sales items (except food) for the next 40 years, during which time an estimated $18 billion will be raised.

The so-called “Keep San Diego Moving Forward” was controversial from its inception, and in the strange bedfellows scenario of the decade, put no growth organizations such as the Cleveland National Forest Foundation (CNFF) and SOFAR (Save Our Forests and Ranchlands) in an alliance with no new tax warriors.

Those against the new tax argue that it isn’t weighted sufficiently for mass transit and against the improvements of roads. Their philosophy is “if you build it they will come,” which translates into the theory that the more roads are improved the more people use them instead of resorting to mass transit, which this group would prefer to see because it will confine people to the metropolitan area and away from the Backcountry.

They are joined by no new tax advocates and those who feel that North County is getting short-changed by this tax, with the center of gravity of the weighted for mass transit.

SANDAG represents all of the county’s incorporated cities as well as the County of San Diego. The largest part of its budget is transportation, including the building of new freeways, maintenance of existing ones, and the building of mass transit nets such as the trolley and bus lines.

The new tax would join the TransNet, which is the half-cent sales tax for local transportation projects that was first approved by voters in 1988, and extended in 2004 for another 40 years.

The purpose of Measure A is to address the needs of highways in the area, and to continue to expand mass transit in San Diego, to give commuters more transportation choices. Nowhere are wildfires mentioned.

All of the money will be spent in San Diego County and can’t be taken away by Sacramento, which has been known to confiscate local property tax revenues in the past.

SANDAG is divided into six areas, with Escondido included in the area known as North County Inland.

San Diego County has a population of about 1.4 million commuters, who make about 3 million trips per day. Sixty-seven percent of those who live in North County Inland work outside of that area, and 24% work outside of San Diego County. Fifty-seven percent of those who work in the region come from somewhere else. That makes for lots of usage of the region’s roads, freeways and mass transit. None of it would be used to build gondolas in Balboa Park, although that was initially proposed in the first draft last year.

SANDAG is responsible for keeping and maintaining a plan to address this challenge, a plan that currently takes the planning out to the year 2050 and which is updated every four years.

In North County Inland the money will be earmarked for adding a carpool lane to the Hwy 78 corridor, two new general purpose lanes to Hwy 56 between I15 and I-5, two express lanes for the I-5 corridor between Hwy 56 and Hwy 78, widening Hwy 67 so that it is consistently four lanes between Mapleview Street and Dye Road, and over the 40 years cities would receive funds based on population to invest in local infrastructure including filling potholes, repairing roads, and building sidewalks. Escondido would get $198 million during the period, with San Marcos getting $124 million and Vista $131 million. Sprinter service enhancements would be made and aging vehicles replaced. Mobility hubs would be created at Trolley, Sprinter, Coaster, Rapid and high volume bus route stations, featuring a wide range of transportation choices including bikeshare, carshare, bike parking etc.

Besides transportation, significant funds would be allocated to preserve, maintain and restore open space, including the acquisition of 25,000 acres, which is the equivalent of 20 Balboa parks. This will also, said Osterhout, reduce the risk of wildfires. This money would not only acquire new open space, but also be used to manage habitat.

The highest priority projects, such as the extension of the Trolley line and carpool lanes on Hwy 52 and widening Hwy 67 to Ramona would be done immediately.

Forty percent of the allocation of the ½ cent tax will go to improve the mass transit network. Much of the criticism from elected officials in North County is that transit doesn’t benefit their areas, and yet a high percentage of the tax will go to it.

Jana Clark of the Cleveland National Forest Foundation opposes Measure A. During a presentation by SANDAG staff of the proposal at a local meeting during the summer Clark said, “We are fighting bad projects and what lies at the root of bad projects is the freeway system.” Although 40% of the new tax would be spent on mass transit, Clark and her allies argue that a much higher percentage should be spent to make up for years of expanding the freeway system, which she says actually encourages new growth away from the cities. This creates “unmitigatible impacts on air quality, noise, energy, land use and fighting climate change.

Repairing and expanding freeways will, she maintains, induce irreversible population growth, increased density and would actually make the region more vulnerable to wildfires.

She called the information being presented by SANDAG for the new tax “greenwashing or propaganda designed to mislead” about the effects of certain policies.”

She called the effect of building roads “Induced demand. If you build it they will come and by the time it’s finished the traffic will be same. We can’t build our way out of gridlock by building more roads. We want to see more invested in transit. We fight gridlock by getting people out of their cars to ride transit.”

“Forty more years of taxes would create more sprawl, congestion, freeways and pollution.” Another argument against an additional sales tax is that it is regressive, i.e. that it hits the poor harder than the rich.