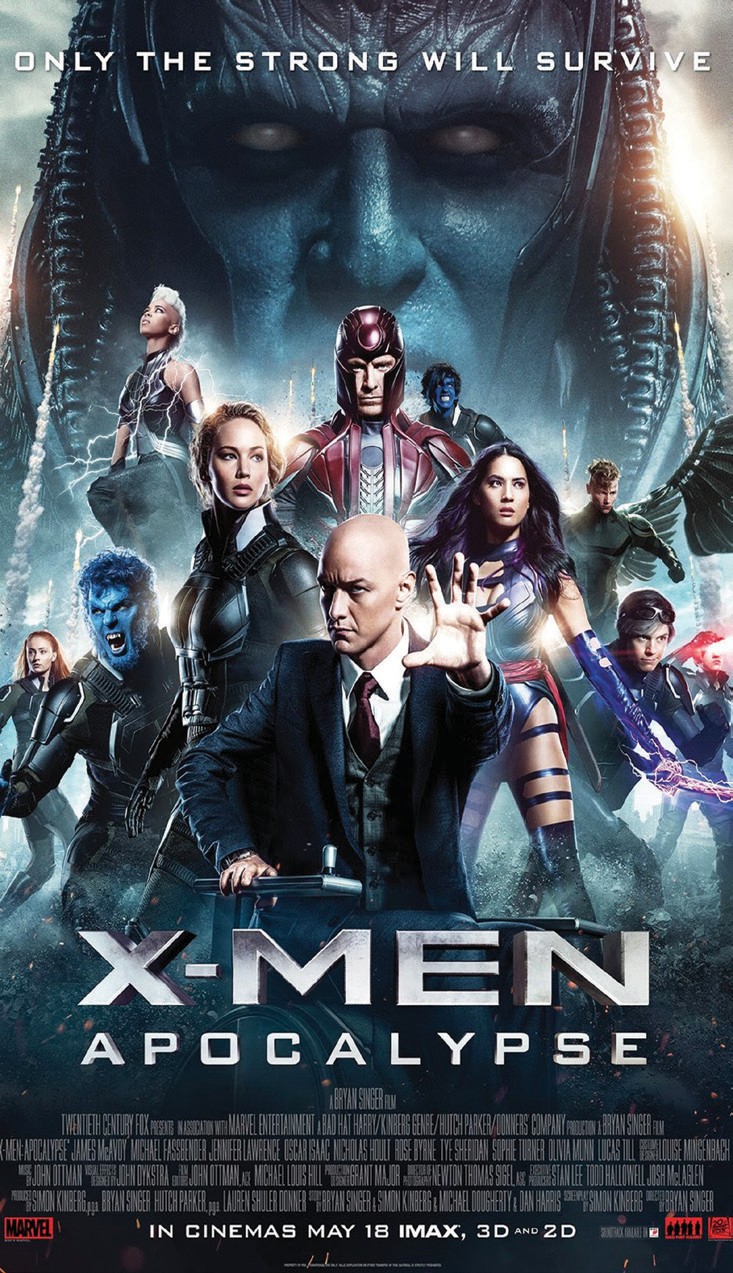 “X-Men: Apocalypse” is a film that exists for no other reason than that it was time for another “X-Men” movie. Fans have been eager to see a new film since “Days of Future Past” was one of the biggest hits of the franchise two years ago. That film ended with the promise of the villain Apocalypse for the next mov­ie, and we’re going to get that movie even if director Bryan Singer can’t come up with anything to make it unique or appealing.

The film takes place in 1983, mak­ing it the third go-around for James McAvoy as Professor Charles Xavi­er, Jennifer Lawrence as Mystique, and Michael Fassbender as Erik “Magneto” Lehnsherr. A comment is made midway through the movie about third films in a series always being the worst. I know the com­ment is supposed to be a knock at the Singer-less “X-Men United,” but it is destined to go down as an uninten­tional prophecy about this film.

For this film, the X-Men must combat a long-dormant Egyptian mutant called Apocalypse (Oscar Isaac). Good guys include Xavier, Mystique, Beast (Nicolas Hoult), Cyclops (Tye Sheridan), Jean Grey (Sophie Turner), Quicksilver (Evan Peters), and Nightcrawler (Kodi Smit-McPhee). And yes, the face and claws of the franchise pops up for a surprisingly bloody cameo. Apocalypse enlists the help of Storm (Alexandra Shipp), Angel (Ben Har­dy), Psylocke (Olivia Munn), and a freshly-angered Magneto. Battles are fought. Resilience is tested. Half the world is destroyed. I say it’s a dumb idea to do the whole “destruction of world landmarks” bit in movies set in the past, but apparently this movie feels otherwise.

Let me get my two compliments for this movie out of the way. Mag­neto’s arc is interesting and I like Quicksilver. Magneto is provided early in the film with a quaint little cottage and a loving family. It’s en­tirely predictable that he’s going to lose it all, but I was digging domes­tic Magneto while he lasted. And Fassbender is good at capturing the character’s heartbreak, despair, and conflict. As for Quicksilver, he once again steals the movie with a zippy comedic heroism sequence. Yeah, he did the same thing in the last movie, but two years later I’m up for anoth­er round. Plus the last one wasn’t set to Eurythmics. Quicksilver also gets props for a scene late in the movie where he is the only one of the X- Men to really take the fight to that putz Apocalypse.

Speaking of Apocalypse, he’s my biggest problem with the movie. He’s one of those poorly-motivated villains who can’t decide if he wants to conquer the world or destroy it, so he’s basically going to destroy everything and then conquer the rubble. Oscar Isaac is a terrific actor, but he’s being swallowed alive by makeup and can’t do anything with his clichéd “humanity is weak” dia­logue. There actually is a suggestion that something fun might have been done with the character when he learns all about humanity by absorb­ing information from a TV. Maybe he could think that TV is an accu­rate depiction of humanity. Maybe he could use some ill-fitting modern slang to try to communicate. I’m not saying he needs to go full-blown Dr. Evil, just something to break up the monotonous doom and gloom from this boring character.

The Apocalypse character is my biggest specific complaint about “X-Men: Apocalypse” But my big­gest general complaint is that we’ve seen this all before. Mutants fight­ing mutants, humans hating mutants, mutants not wanting to be mutants, mutants accepting and embracing that they’re mutants and working up the courage to fight other mutants, all in an endless cycle. This is the eighth “X-Men” movie (not counting “Deadpool”) and the fourth major comic book/superhero movie (this time counting “Deadpool”) already this year. It needed to do something exceptional with its action or dia­logue besides being so exceptionally bland.

“X-Men: Apocalypse” is rated PG- 13 for sequences of violence, action and destruction, brief strong lan­guage and some suggestive images.