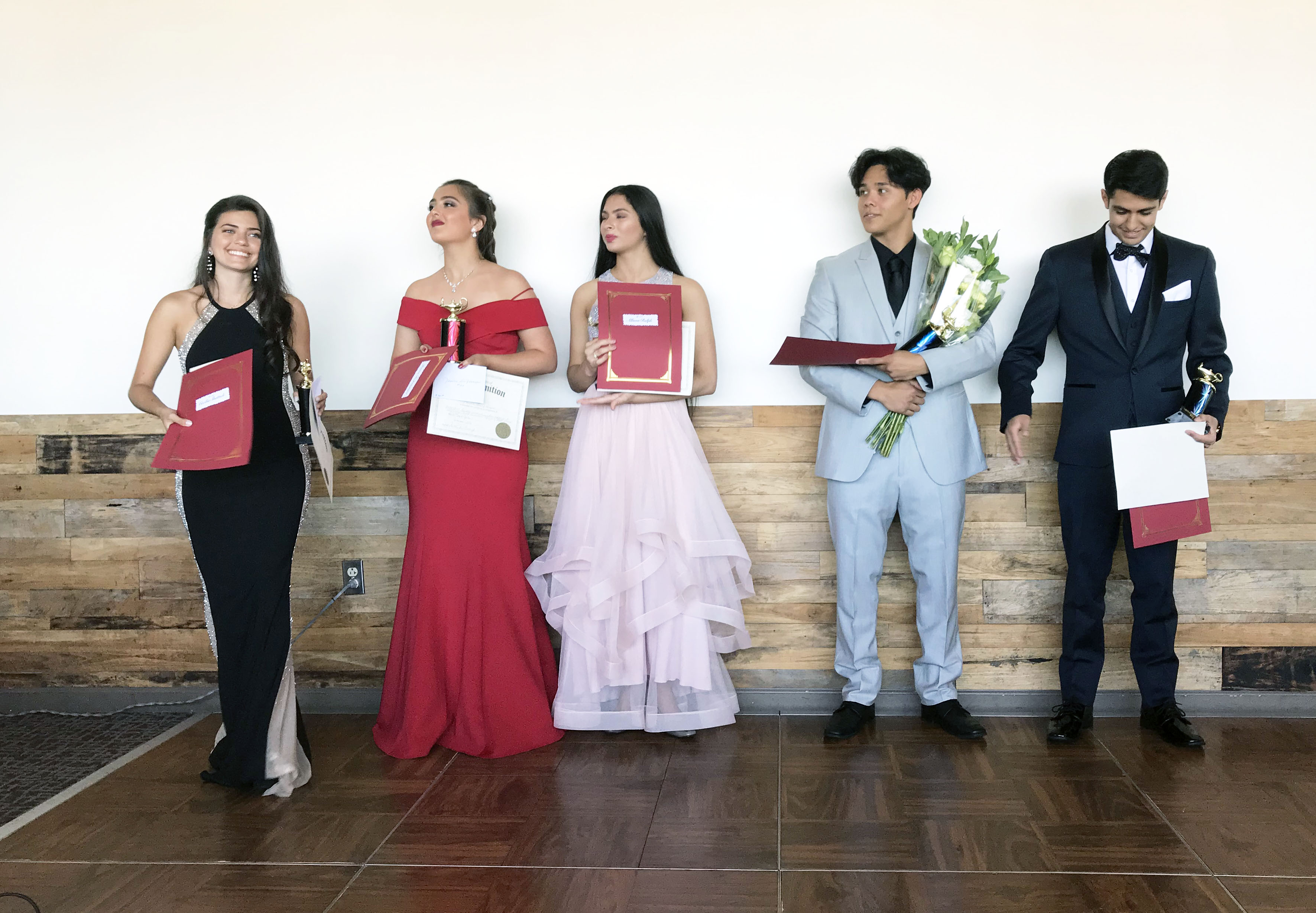 The contestants of WROTE Ministries & Networking With Purpose scholarship awards competition which was held June 30.

Five local students competed for the scholarships, which ranged from $500 to $3,000 (the latter amount  was awarded to two students who gained the highest score individually) which was achieved by Cecilia Shattuck and Keegan  Bushouer.

Contestant # 50 Cecilia Shattuck, daughter of Mr. & Mrs.  Ronald Shattuck was sponsored by her employer, John Toma, owner of the “Z” cafe in  Bonsall, The Temecula Pet Hospital & The Grand Tea Room in  Escondido.

All contestants performed a talent show of excellence and creativity in the competition in addition to providing a speech and answering a spontaneous drawn question, asked by emcee assistant, Jason Geike, who is in full time ministry with “CRU Ministries” (Campus Crusade for Christ) and serves as director of that organization for the high schools in San Diego.

Students “wowed” the judges with their appearance, talent, skill and dialogues. The five students donned formal attire provided by the Friar Tux Shop in Escondido and David’s Bridal of San Diego.

The students, who qualified to participate in the WROTE training program and compete were eligible based on their enrollment in a local school, GPA, completing  an application, listing personal references, an interview, single status, plus extracurricular activities. Most of them work  part time, while also attending school.

Most have chosen a college where they plan to either continue attending or to become enrolled next fall.

Marty McCullough, founder of WROTE Ministries & Networking With Purpose was MC for part of the program and then turned things over to Geike, who announced the winners after the judges turned in their scores.

The judges were led by Clifford Fleischbein, who compiled the score sheets and gave the results to the MC.

Before the winners were announced Mrs. McCullough introduced contestant#30 (Keegan Bushouer) who sang the postlude, “Let There Be Peace On Earth.”

D.J. Dennis Tomlinson provided the music for that song and audio and sound for the event.

All the contestants were acknowledged individually with  a trophy. The student who was announced first was the  5th place winner,  Allison Ralph, with the 4th place going to Jessie DeJaurnegui and Mikel Flamino, 3rd place.  Each gender competed among themselves, with the two highest scores earned by Cecilia Shattuck and Keegan Bushouer.

Dinner was served to the contestants following the judging and awards. Acustom designed frosted cake baked by “Cute Cakes” showed all the contestants’ pictures on top!

Individual photos of the contestants at the entrance was exhibited on a marquis, which also talked about the students’ interests and hobbies.

It took a few minutes for the judges to determine the top two winners based on the highest scores.

The winner,  Cecilia dazzled the judges with her creative tap dance and effervescent personality.  The other top winner, Keegan’s vocal rendition was passionately sung in a smooth baritone. Listeners later learned that this young gifted artist, who graduated from Mira Mesa High School never had a professional voice lesson.

The winners were awarded impressive trophies and flowers. Their “acceptance speeches” thanked those who helped them achieve success in the competition.

All the contestants departed with a noticeable ‘smile’ since no one left empty  handed or without a scholarship.

The ‘networking’ aspect that is prevalent at most of the WROTE Ministry events, gave an opportunity for the guests to hear Alma Menera, sales manager, who gave a brief background about David’s Bridal and the scope of the business that has grown so successfully over the years.  Jason Geike, besides being the inspirational & motivational speaker earlier in the program also spoke on behalf of  the Friar Tux tuxedo company emphasizing  the expertise they exercise when accommodating customers with just the right fit and color.

WROTE Ministries next event, November 30, will be a pre-Christmas Tea.  The inspirational and motivational speaker will be Cathy Armitage, associated with “Moms in Prayer”, but who presently is with Global Ministries that trains leaders in 195 countries.

The network guest will be Carla Allred from “Overture,” who will unveil some of the amenities at the senior residence located in Escondido.  Special music will be by vocalist Hannah Allred. For inquiries send an email to wroteministries09@gmail.com. 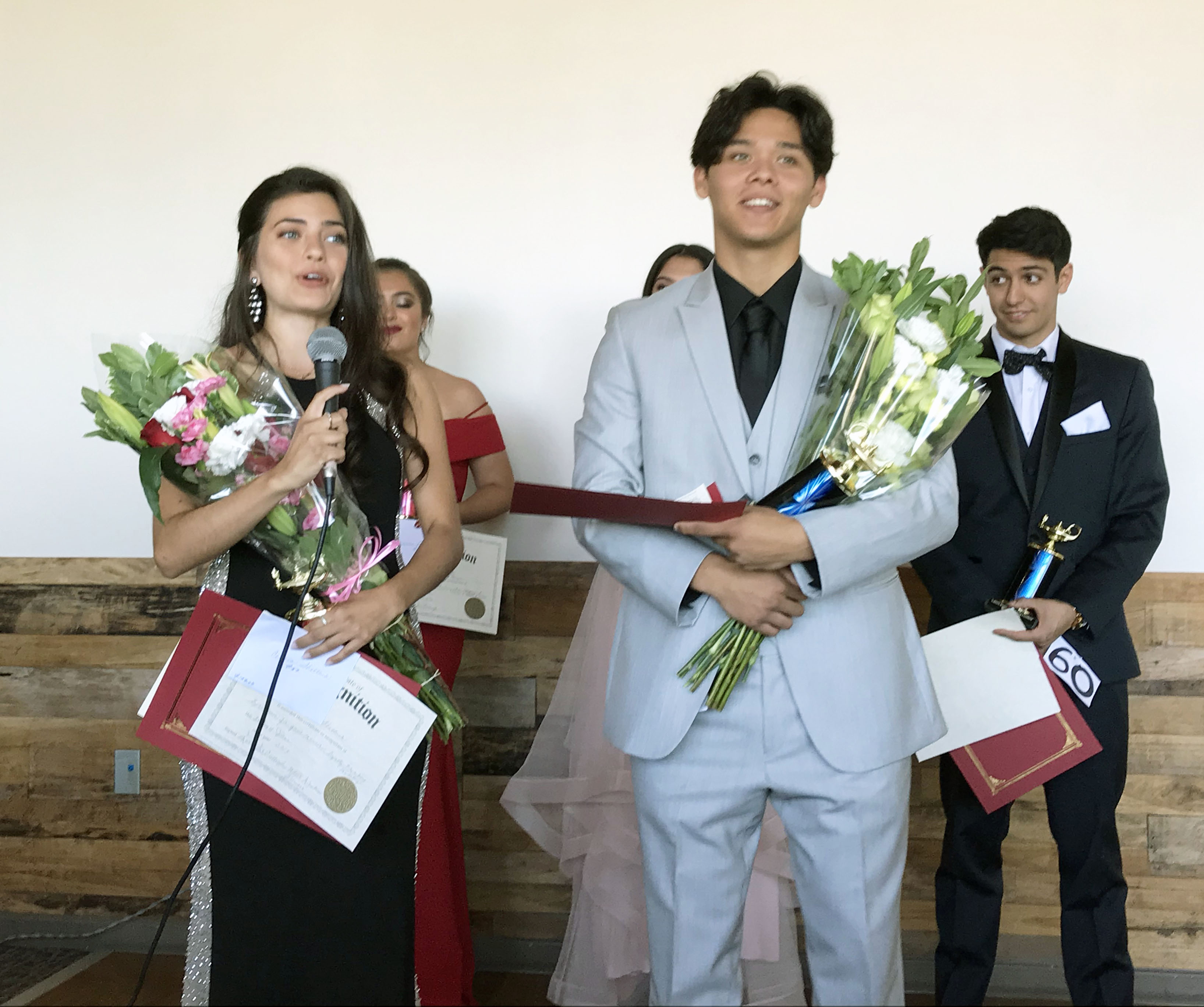 Winners Cecilia Shattuck and Keegan Bushouer thanked those who helped them achieve success in their competition.