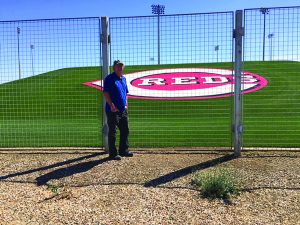 Writer Jim Tal Evans was able to catch up with his favorite team, the Cincinnati Reds, at their spring training complex in Goodyear, Arizona. Photo by Jane Webb

As far back as I can remember, it’s been the Cincinnati Reds for me. Always has been, always will be.

It really couldn’t have been any other way given the fact that my Dad was reared in the Queen City, had a deep passion for his beloved Reds and made certain that his sons embraced Cincy’s folklore and history.

If your dad is an ardent fan of a certain franchise, it’s more than likely that as a youngster and from then on, your heart and rooting inclinations will follow suit. In many respects, you really have no choice. Households function more efficiently and much more peacefully when everyone is on the same page when it comes to cheering for the same ballclub. Moreover, having that commonality really does create a special bond that can be everlasting and sublimely unique.

But alas and as much as it pains me to have to acknowledge this sad reality, my Dad has passed on. As a result, for nearly five years, the Reds have had to soldier on without one of their most dedicated followers.

And yet, the sons remain so whenever my brother Tom or I have the chance to watch our adored Reds in the flesh, we make every effort to do so because in a rather mystical way, we can still feel our Dad’s presence.It’s as if he’s right there with us, taking in every pitch and either rejoicing or anguishing over what circumstance happens to be confronting the Reds at that precise moment.

So it’s with that background that I found myself this past Sunday at a cozy and intimate ballpark in Goodyear, Arizona to take in the Reds’ spring training game against the Milwaukee Brewers.

Cincy is in the midst of what has been a most painful rebuild that has resulted in two successive last-place finishes and a staggering total of 192 losses over that period. Considered to be a small-market team and forced to trade off valuable assets like pitchers Johnny Cueto, Aroldis Chapman, Mike Leake and productive position players Todd Frazier and Jay Bruce because it could no longer afford them, the Reds have clearly suffered as a result.

Untimely injuries have also played a huge part in Cincy’s recent demise. But with the return of spring and the inevitable sense of optimism that it brings, comes renewed hopes for a brighter future ahead. The Reds do possess some promising and intriguing young players that have the potential to possibly flip the recent fortunes of this proud and historic franchise if all goes well.

And what was played out before me and crowd of 4,151during an eventual 4-2 Reds win was thoroughly entertaining. Under a light blue and sunny sky with the temperatures hovering in the mid-80s, the game had a nice flow to it and wrapped up in a tidy 2:38.

Even better from a Reds’ standpoint, there were plenty of interesting storylines that took place that made for some compelling theatre.

Forty-year-old right-hander Bronson Arroyo, who had been a Reds’ mainstay for eight seasons through 2013, is attempting a poignant comeback with his old club. Having not pitched in a major league game for two years due to multiple surgeries and injury, Arroyo got the start against the Brew Crew and gave evidence that he still might have it.

After allowing a leadoff single, the long-haired veteran demonstrated his customary guile and deception by later retiring six hitters in succession while recording a pair of strikeouts. Arroyo threw with ease and from a variety of angles that harkened back to his halcyon days. Arroyo has always been a craftsman on mound, setting up hitters with off-speed and junkball stuff and that was certainly the case in this instance. Moving forward, if he can duplicate what he showed on Sunday, Arroyo just might steal a starting spot which would make for a feel-good story if there ever was one.

Another player battling back from two years of injuries is catcher Devin Mesoraco. An All-Star in 2014 and thought to be a cornerstone of the franchise, Mesoraco has been operating under a dark cloud since then with shoulder and hip surgeries limiting him to just 39 games the past two seasons. Signed to 4-year contract of some substance, the Reds are being exceedingly cautious in working Mesoraco into the fray but the fact that he was back on the field and actually caught a few innings against the Brewers is perhaps a hopeful sign that this talented but snakebit receiver might still live up to his vast potential.

Sweet swinging Jesse Winker demonstrated why he just might be the best young bat in the Reds organization. The dark-haired 23-year-old rifled a liner into the leftfield corner for an RBI double that staked the Reds to a 1-0. Later, Winker smoked another shot that looked to be a surefire hit only to be denied by third baseman Ivan De Jesus Jr., who made a superb catch while diving to his left.  Already having a productive spring and armed with a great approach at the plate, the 6-foot-3 Winker is making a strong push to stick with the big league club. Winker seems on the verge of making a real impact.

Though he didn’t record a hit, Reds’ standout first baseman Joey Votto put the wood to a couple of hard hit balls. After lining out to second, he then sent a vicious rocket up the middle that pitcher Neftali Feliz flagged down before it deflected to the shortstop Orlando Arcia, who subsequently threw wide to first for what was ruled an error. But as far as his stroke was considered, Votto looked be in midseason form. A former MVP, four-time All-Star and a .313 career hitter who is considered to be one of baseball’s most discerning batsman, Votto is simply a pleasure to watch whenever he steps into the batter’s box.

Perhaps the player who stole the show on this bright afternoon was hard-throwing Sal Romano who continued to generate lots of buzz with another notable outing. Throwing plenty of gas in conjunction with an effective slider and changeup, the 6’5”, 270-pound physical specimen wowed onlookers with a performance that was flat out dominating at times. At one stretch during his 3.2 IP, this youngster fanned a remarkable six in a row. Though supposedly ticketed for Triple-A this season, Romano is causing the Reds coaching staff to take serious notice and is suddenly very much in the mix for a possible rotation spot.

A hurler who figures to factor heavily into the bullpen equation is the newly acquired Drew Storen. Equipped with a hesitation delivery, Storen pitched well in his one inning of work, throwing to spots and displaying ample velocity en route to striking out a batter while not allowing a hit. The right-hander, who as recently as 2015 racked up 29 saves for Washington, could be of enormous help late in games if he can recapture the form he flashed while closing for the Nationals.

Outfielder Adam Duvall, who had a breakout season in his first full year with the Reds with 33 homers and 103 RBI, gave every appearance that he’s prepared to build on that impressive effort when he stung a couple of singles, one up the middle and the other a shot into left which raised his spring average to .304. Expected to hit out of the cleanup spot, Duvall must continue to produce if the Reds are to make inroads as it relates to moving up in the standings.

Arismendy Alcantara will have plenty of competition trying to earn a utility role for the Reds but on Sunday he showed that he must be considered a candidate to fill that niche. A smooth and effortless infielder, Alcantara has supple hands and can cover plenty of ground, whether he’s moving laterally or going back on shallow pops or fly balls. This guy can really defend. Moreover, the one-time Chicago Cub showed that he can swing the stick when he drilled a frozen rope for a single.

Finally, a brief mention must be made of Zack Cozart who is another vet battling back from truncated seasons. After having missed most of the previous year with a knee injury, Cozart’s solid campaign of 2016 came to a premature end when he was plagued by patellar tendinitis. Now appearing to be healthy, Cozart looked sharp against the Brewers, doubling home a run while scoring another. By game’s end he was hitting a robust .316 for the exhibition season and in the field, Cozart remains as dependable and solid as they come.

Because he’s about to become a free agent next seaon and with some gifted young Red infielders primed for an opportunity at shortstop, there’s strong talk that Cozart could be moved to a contender sometime this season. But as long as Cozart remains on the roster, he’ll be the man up the middle because of his standout glove, reliable bat and the positive influence that he exerts on both the field and his teammates.

As always and no matter what the setting, watching my favorites from boyhood remains a special and cherished occurance. There’s only one drawback to it. That being that I can no longer share that meaningful experience with my Dad in real time. But just because he wasn’t with me in the flesh, his spirit was nonetheless present. In a very real sense, whenever I see our beloved Reds, he will forever be with me.