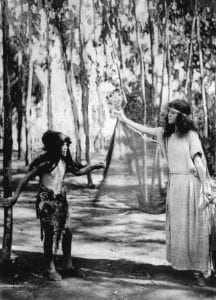 A scene from the 1915 Valley Center performance of the fabled show now known as “Pageant of the Masters.”

One of the world’s most famous outdoor extravaganzas — the Pageant of the Masters — is being performed this Summer in Laguna Beach, while visitors to the Valley Center History Museum are being reminded that the fabled pageant had its start locally 103 years ago.

A display currently on view at the museum includes memorabilia such as vintage photos, programs, and a script for the event.

On the picturesque grounds of the castle that gave Old Castle Road its name, more than 1,500 people showed up on opening night in 1914 to claim 500 available seats, according to local newspaper accounts. They witnessed an event Sunset magazine described as “A Pageant in the Wilderness”.  The review went on to call it “one of the most remarkable outdoor pageants in all of California.”

The fabled pageant with 40 fully-costumed actors and full orchestra was created and staged by artist Isaac Frazee.  In the background of the 160-acre park-like setting was the castle home that he had built in 1893 for his wife and seven children.

Frazee, who years earlier had painted the first known watercolor of Laguna Beach, attracted the attention of a growing art colony in the Orange County community, and he subsequently was invited to move his pageant. That occurred in 1921.

Frazee died in 1942 but left volumes of memoirs and photos behind, most of which are at the Valley Center History Museum which also has a permanent exhibition of the Old Castle.  The unique home remains a private residence.

The museum is open Tuesdays through Saturdays from 12 noon to 4 p.m. Admission is free.  For more information, visit vchistory.org or call 760-749-2993.