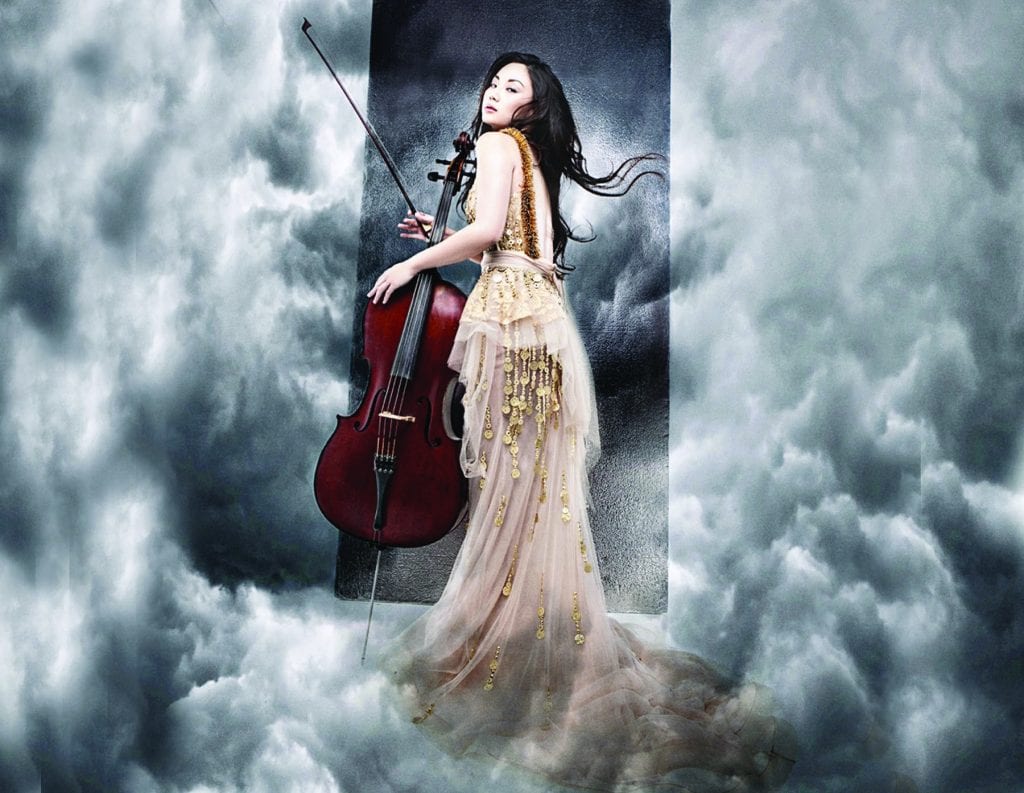 Tina Guo, the most famous alumnus of the Escondido-based San Diego Civic Youth Orchestra, will return to the area to perform at California Center for the Arts, Escondido on April 29—and performing with the orchestra where she first played when she was 10-years-old.

“When she grabs the Cello, it’s like a sword. She becomes the Wonder Woman,” says Hans Zimmer, whose band Guo has traveled with on its world tour.

In this concert Tina Guo, along with the SDCYO Symphony Orchestra, will perform classical pieces as well as some of her most popular hits.

Guo is an internationally acclaimed and Grammy-nominated virtuoso acoustic/electric cellist, recording artist, and composer. Guo is also a SDCYO alumna who performed the Saint-Saens cello concerto with the SDCYO Symphony Orchestra when she was 10 years old. With a multi-faceted career and mastery in a wide range of genres, her passion for musical exploration, artistic expression, and technology are expressed through live performance and visual media.

Guo’s solos have been featured on the scores of Wonder Woman, Sherlock Holmes, Inception, Iron Man 2, Batman vs Superman, Pirates of the Caribbean 5, and much more!

Bob Gilson, musical director for SDCYO for more than 30 years, told The Times-Advocate how the concert came to be.

“CYO celebrated its 60th Anniversary last June and I had contacted Tina Guo, as our most famous alum, to play on the concert in June, 2017,” he recalled. “ She brought me up to date on her career, told me she was now a featured player in Hans Zimmer’s band and had been on most of his movie soundtracks.  Unfortunately, she would not be able to be at our celebration because she would be on world tour with Hans Zimmer and thought she would be in Finland or Germany at the time of our concert.”

Near the end of that one of the band’s final performances was at the Park Theatre, Monte Carlo Hotel in Las Vegas. Gilson contacted her; told her that he and his wife wanted to attend the concert and meet her after.  “So, my wife and I spent that weekend at the Monte Carlo, saw the concert, where Tina was featured in a piece that Hans Zimmer introduced as ‘Tina has some friends here and we would like to feature her.’  An amazing piece and an amazing concert.”

Gilson and his wife met Guo after the concert backstage, which was subject to enormous security. “Tina is all grown up now (it’s been 20 years), but we recognized each right away and gave each other hugs.”

They chatted about the tour, her career, and then Gilson said, on the spur of the moment, “How about doing a benefit concert for CYO next spring in Escondido? You would play the Saint-Saens cello concerto, like you did with us twenty years ago, on the first half of the concert, and then we would feature you and your band on the second half of the concert, playing electric cello, a la ‘Wonder Woman.’  The finale of the concert would be you, your band, and the orchestra all together.”

Guo said that sounded great, but had no idea of her schedule yet for the spring of 2018.

“We didn’t even have a date at CCAE,” recalls Gilson. “As it turned out, Hans Zimmer was planning another tour to Asia in the 2018, probably in the summer, but no details yet in August, 2017.  We got the ONLY date available at CCAE in the Concert Hall-Sunday, April 29.

So that spur of the moment idea resulted in the April 29 concert at CCAE. At that concert the orchestra will play an overture at the beginning of the concert. Guo will then play the Saint-Saens cello concerto with the CYO Symphony, like she did 22 years ago.  After intermission, she and her band will play a variety of tunes from her latest album, “Game On,” and the concert will conclude with Tina Guo, her band, and the orchestra joining to play “Legend of Zelda.”

CYO holds rehearsals at the Classical Academy High School and has about 175 students, ranging in age from 5 to 22. Guo played with the orchestra from age 10 until age 12. She now tours with Hans Zimmer Live.