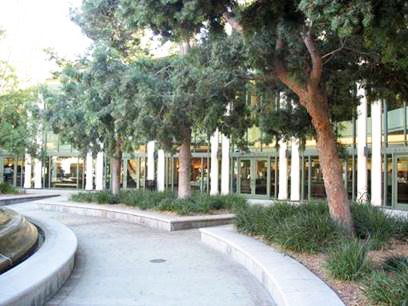 Trees planted around the fountain have created a maintenance problem over the years. During the fruiting season they drop pods into the water and clog the pumps and filters.

The City Hall is getting a major landscaping facelift for the first time since the iconic rotunda and its award-winning design opened three decades ago. Something of a minor public furor has resulted.

This year the city of Escondido celebrated the 30th anniversary of the opening of the City Hall. This week the city is beginning an eight week effort to replace dated trees that are hiding the hall’s architecture and replace them with trees that will restore the original appearance as well as dealing with what has become a safety and maintenance hazard.

The work began October 13 and will continue an estimated eight weeks.

According to the city in the coming weeks the staff “will work to improve the safety and beauty of the landscaping surrounding City Hall and the fountain.” A statement from the city said, “This year City Hall celebrated 30 years of operation and the current trees surrounding the fountain have reached their life expectancy and are now creating maintenance and tripping hazards around the building. The trees will be removed and replaced with attractive, drought tolerant trees and plants.”

During the fruiting season the trees around the fountain drop pods into the water that clogs the pump system. The roots are lifting and damaging the concrete. Maintenance crews have tried various expensive measures to stop the trees from fruiting, even resorting to chemical treatments, but nothing worked. Concrete grinders have been employed to level areas where slabs have lifted, but this wasn’t aesthetically pleasing.

According to a city spokesman, “The trees surrounding the fountain have served their purpose and need to be replaced immediately. Staff has evaluated options and proposes to remove the large specimen trees and replant with different varieties that will accentuate City Hall’s aesthetics and reduce maintenance costs.”

Social media erupted with various people calling on protestors to show up en masse at the next city council meeting and to demand public involvement over the tree removal.

Regarding the people who have taken to social media to attack the city for doing the restoration, City Manager Jeff  Epp told The Times-Advocate: “The trees were long overdue to be replaced.  There was nothing unusual about the species and they were just causing problems.  They were obscuring the natural light to City Hall.   A lot of community participation went into designing and building a beautiful city hall structure, and these overgrown trees were completely hiding the beauty of the building.”

Epp added, “Those few misinformed malcontents complaining about the tree removal didn’t know what they were talking about.  We made the decision to replace the trees at the staff level.  It was a good decision and I would make the exact same decision again.” 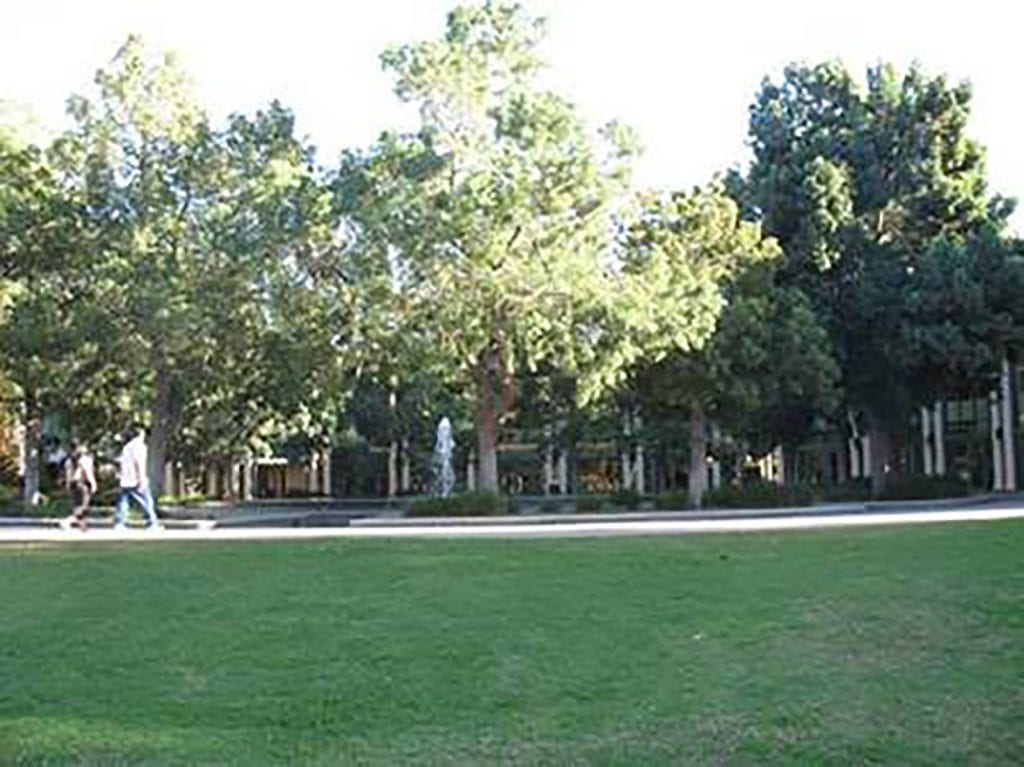 This photo shows how the trees planted 30 years ago came to hide the features of the City Hall building as opposed to complementing it, as they were intended to do when first planted. They have grown to create a visual barrier that blocks the view to and from Grape Day Park.

·         Removal and stump grinding of the trees will occur on October 13 & 20 to limit the noise during working hours.

·         Irrigation and electrical work will take place during the work week.

·         Replanting will begin once the irrigation and electrical work are complete.

According to the City:  “Little Gem” Magnolia trees will be installed that will reach a mature height of up to 25 feet and 10 feet wide. These trees will bloom with the same classic magnolia flower and remain evergreen.

“Two Redbud trees will be installed as an accent in the planters closest to Grape Day Park. These trees will mature at about the same height as the magnolias and span about 25 feet in width. The Redbuds will be spaced further apart to frame views into and out of the fountain area as depicted in the image below.

“These two Redbuds are deciduous (dropping leaves in the late fall) and welcome springtime with a burst of bright flowers before the branches leaf out. Both varieties are slow growing species (about 18 inches per year) and will be about 10 feet in height when first installed.”

So the same problem doesn’t crop up again in another 30 years, the Dept. of Public Works has confirmed that the new trees, and their leaves and flowers, won’t pose the maintenance or safety issues currently experienced with the existing trees.

Also falling victim to the woodsman’s axe (please don’t take us literally here) will be six mature trees on the Valley Parkway side of City Hall located on a raised planter next to the loading dock entrance. These trees are damaging the building. They will be swapped out for smaller, maturing, non-flowering evergreens or large shrubs.

Funding for all this comes from a state Housing-Related Parks Program grant.  The project combined the efforts of Engineering, Public Works, Housing, Planning, Graphics, and Community Services. 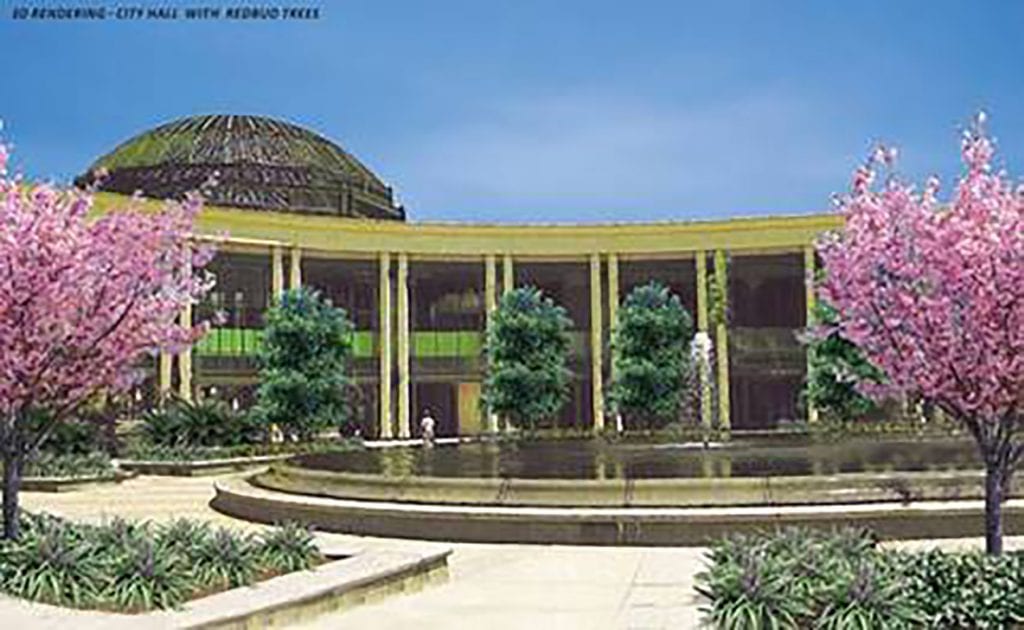 Artist’s rendering of what City Hall will look like after the new trees are fully grown and mature. They will accent City Hall and create a welcoming experience, rather than block the views of the building and Grape Day Park. 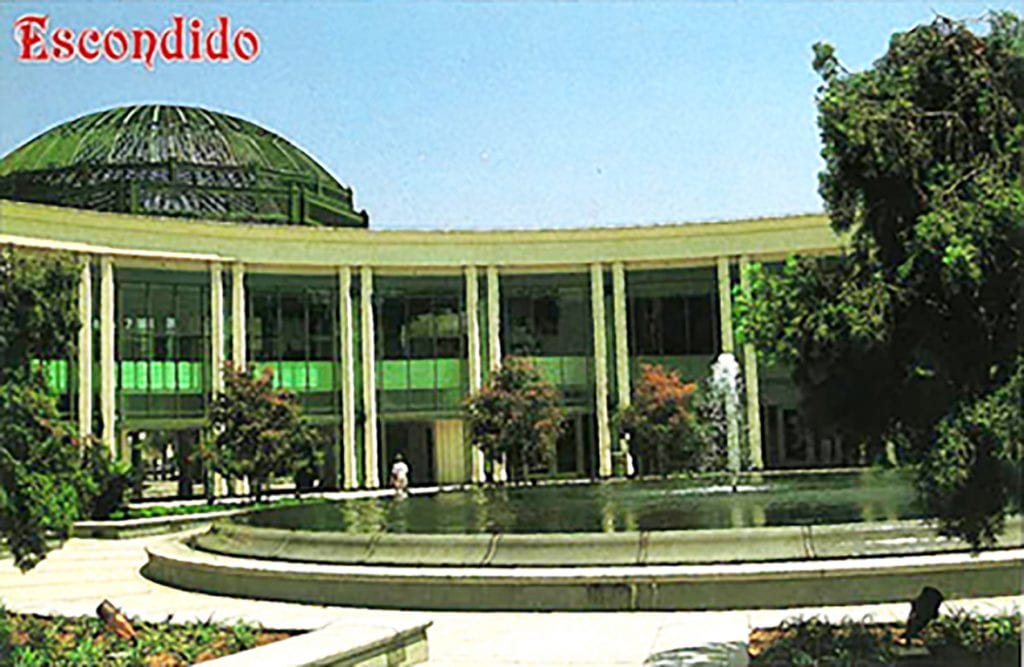 A postcard from 30 years ago shows how the shrubs and trees planted around City Hall framed the structure, rather than covering its features, as the trees have come to do.