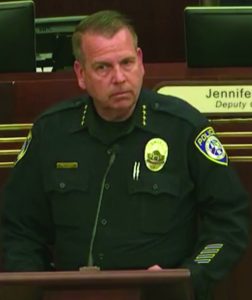 A grim Police Chief Craig Carter speaking at Wednesday’s city council meeting about the shooting of Catherine Kennedy. He made a plea for members of the public who might know who the shooters are to call the police hotline.

Tuesday, March 7, was 55-year old Catherine Kennedy’s final day of life. She lost her life around 9:09 p.m. that evening when the Escondido woman was driving on the 1800 block of East Grand Avenue. She was returning home from a Tuesday night Bible study. Mrs. Kennedy inadvertently drove through what seems to have been a gang shoot out and was hit in the head by a stray bullet.

Police and fire units were initially dispatched to the 1900 block of E. Grand Avenue regarding a vehicle collision.  Once on scene, officers determined that the female driver (and sole occupant) of a silver Toyota Camry, identified as 55-year-old Escondido resident Catherine Kennedy, had actually been shot once in the head.

Based on their conversations with witnesses, the police believe at least two possible gang members were shooting at each other in the 1800 block of E. Grand Ave.  As the shooting was occurring, Mrs. Kennedy was driving east on Grand Avenue and was struck by a stray bullet, causing her to lose control and crash into a parked, unoccupied vehicle.  She was transported to Palomar Hospital but later died as a result of her injuries.  The suspects responsible for this crime have not yet been identified.

At Wednesday’s city council meeting, the afternoon following the shooting, Mayor Sam Abed said, “We are deeply saddened by the tragic death of an innocent member of our community, Catherine Kennedy. Her tragic death by gang violence reminds us that safety should remain a top priority by the city of Escondido. We recognize the outstanding efforts by our police department to apprehend those criminals. Gang violence will not be tolerated in our community. We will continue to work closely with our law enforcement partners and the district attorney to make sure that Escondido will remain a safe place. The police department received numerous calls from individuals offering to help.”

Escondido Police Department Chief Carter spoke to the council, “We at the police department are grieving with our community. We had a lady who was coming home from church, from Bible study, who lost her life because of gangs. Who felt it was OK to put bullets in the direction where they shouldn’t have gone. We are working tirelessly to solve this and to get justice. We are relying extensively on the public.”

The chief noted that they have “a plea out to the public, including the gangsters.” His theory, he said, is that even gangsters having mothers and they wouldn’t want this to happen to their mothers. “They have parents. And would they want that to happen to their parents? Somebody in that community knows what happened. If you have a heart and you are listening to this broadcast later, make that call.”

The chief reiterated comments that he made earlier in the day to TV interviewers that a “problem apartment complex” has been identified in that part of town. “We are going to go after the owners of that complex who continue to knowingly rent to criminals. That is not acceptable in this community.  We will not tolerate it.” He promised to “bring the criminals to justice.”

The Times-Advocate spoke to Chief Craig Carter on Monday to ask him if the shooting is a symptom of increased gang activity in the city. Is gang activity on the rise. How does he address residents who feel that their safety is threatened?

“The answer is that it fluctuates,” said Carter. “There are times when it is extremely quiet and sometimes when it heats up. We were in a lull time and since the shooting it has quieted down again. Mrs. Kennedy was an unintended victim. I don’t think there was an intent to hurt her.”

The chief noted that increased graffiti usually signals an increase in violence. “We have a robust gang enforcement team that keeps an eye on known gang members and we will continue to do that,” he said. The gang enforcement team consists of eight officers and a sergeant, although as Carter added, “really the entire patrol division does that too. It’s not just one individual’s job.”

There are two kinds of graffiti, he said, gang and taggers. “They are often not easily identified.

When we see graffiti, we determine if it’s gang or not.” If it is determined to be gang-related, it usually indicates that one or the other of three gangs that historically operate in Escondido is violating “the turf” of another gang and taunting it.

That usually leads to violence.

Chief Carter told The Times-Advocate: “The most important thing to remember is, ‘If you see something say something.’ If you see individuals coming together and looking like they are up to no good— Call us. And if you know anything about Mrs. Kennedy’s attack call the Crime Stoppers and give us as much information as you can.”

Meanwhile, said the Chief, “We are getting some leads and we’re working on them.”