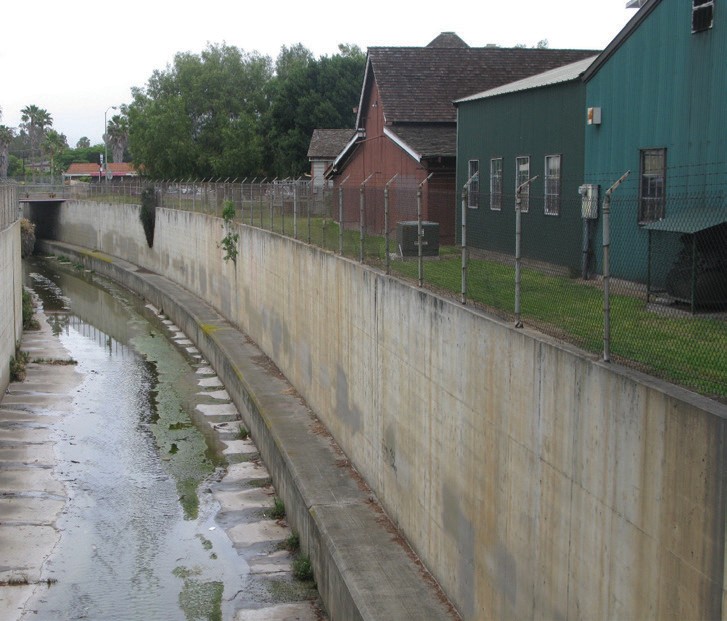 The bridge into Grape Day Parks offers a view of Escondido Creek in its flood control chanel. City officials are work­ing on a proposal to build a library that would cover the parking lot and return the creek into public open space.

About seven years ago Diaz and Ka­tie Regazzi – a member of the Escon­dido Education Foundation and “A visionary who delivers” – according to her LinkedIn page, planned to take a bike ride along the creek.

The city officials wanted to provide police protection for the two women and did. Diaz says there’s a picture of them and their police escort.

“I’ve been talking about it for a long enough so that we actually have gotten the creek vision plan and master plan completed several years ago. So I actually started the project,” she told The Times-Advocate.

Since that time in any town that Diaz visits that has a river or a creek, she goes and takes a look. She re­cently loaned her pictures of San Luis Obispo’s creek side development to Councilman John Masson for a presentation at the Escondido Chamber of Commerce.

Masson is strongly backing the library-creek proj­ect at Grape Day Park. City planners are working on a proposal and there may be a bond issue to fund the project on an upcoming ballot.

She has met with Ken Erickson, an Escondido- born architect, who designed Escondido Charter High School and did work on Classical Academy in the same city.

“Erickson had the vision of doing something really great in Grape Day Park,” Diaz said, “Putting a 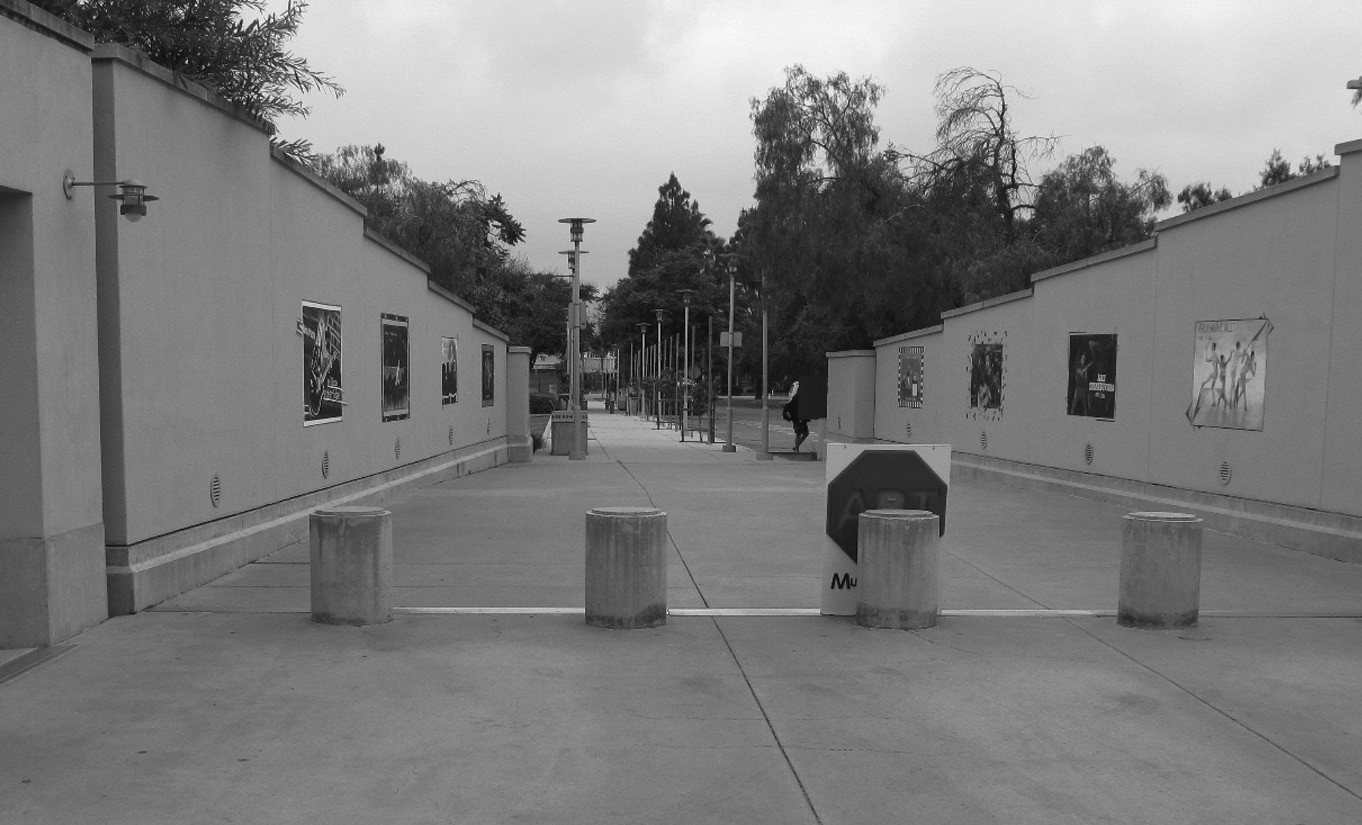 People arriving for events at California Center for the Arts Escondido walk through a walled bridge that eliminates any view of the concrete flood control channel that is Escondido Creek. Photos by Doug Green

library there instead of the one on Kalmia (Street) and then taking the creek and making it sort of an access point to the park, just to make it beautiful.”

“I’m glad to have John’s support with the creek proj­ect because I feel that there were many years when I was just kind of going it alone,” Diaz said. “Staff would apply for grants and that was always very help­ful. But in terms of bringing attention to the creek, we began doing creek cleanups and doing art in the creek, those kinds of things.”

Diaz has worked on creek projects since she came into office in 2008.

“The creek runs right up the spine of the city and it needs to be transformed for safety, for usability, for the bike path. We’ve had some small success with grants from SANDAG (San Diego Association of Govern­ments). We’ve had lighting installed from Grape Day Park to Ash Street. We’ve had an undercrossing at Ash (Street).” she said.

She noted that San Luis Obispo did its two-block creek walk in segments. The Guadalupe River in San Jose “is a huge rive but they only made a small portion of it gorgeous. So I’d settle for that,” she said.

She said she was ‘the biggest champion for the li­brary” and hopes to see a grand one at Grape Day Park rather than a “hodge-podge” of a renovated library at 239 S. Kalmia St.

The downtown area doesn’t have a lot of parks, aside from Grape 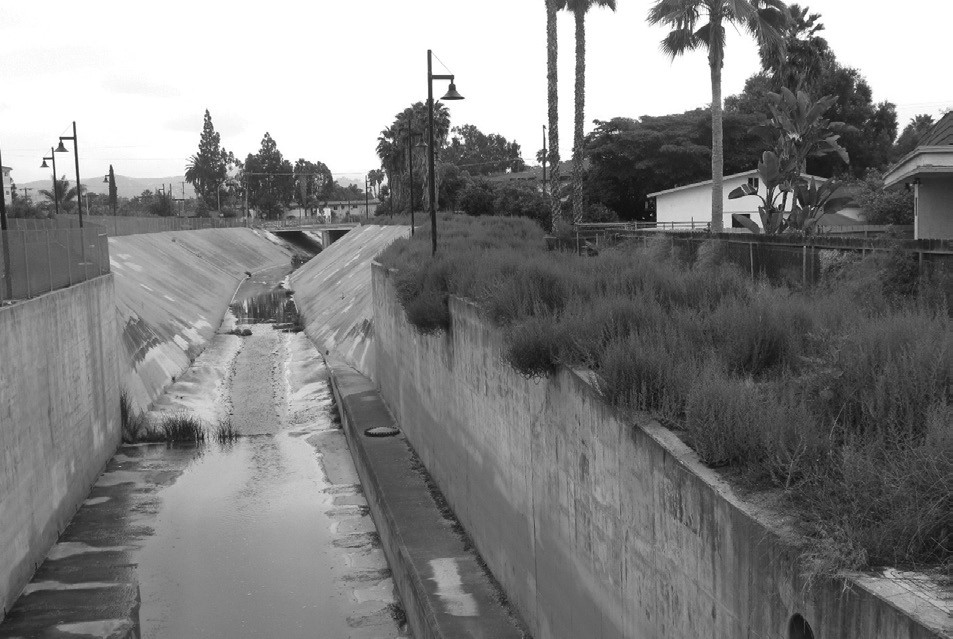 Escondido Creek looking east from Broadway turns into the concrete-lined ditch built by the Army Corps of Engineers in the 1960s.

“There’s not a lot of open space and there’s a whole lot of density so people could use it as a park who don’t have access to Daley Ranch or Kit Carson Park,” Diaz said.

“Of course I’m the biggest champion for the library. I was excited to be getting any additional library re­sources,” she said.

Dias said some creek side businesses “turned their back on the creek” after the Army Corps of Engineers turned it into a concrete-lined ditch in the 1960s and “a lot of communities have doubled them back so they don’t look like a scar on the city. Escondido will some­day achieve that.”

That day may be coming soon. After getting rid of California’s 400 Redevelopment agencies, a new form of “ReD” is coming back.

According to The Bond Trader Website, Assembly Bill 2, adopted last fall, establishes new revitalization districts, which are a limited version of redevelopment.

The law targets the state’s most impoverished areas and creates a mandate set for affordable housing at 25 percent of the development.

“Redevelopment will never be what it was,” Diaz said. But the new legislation may offer opportunities for funding the creek-library project.