Why did one of America’s best generals botch the Battle of San Pasqual 170 years ago? 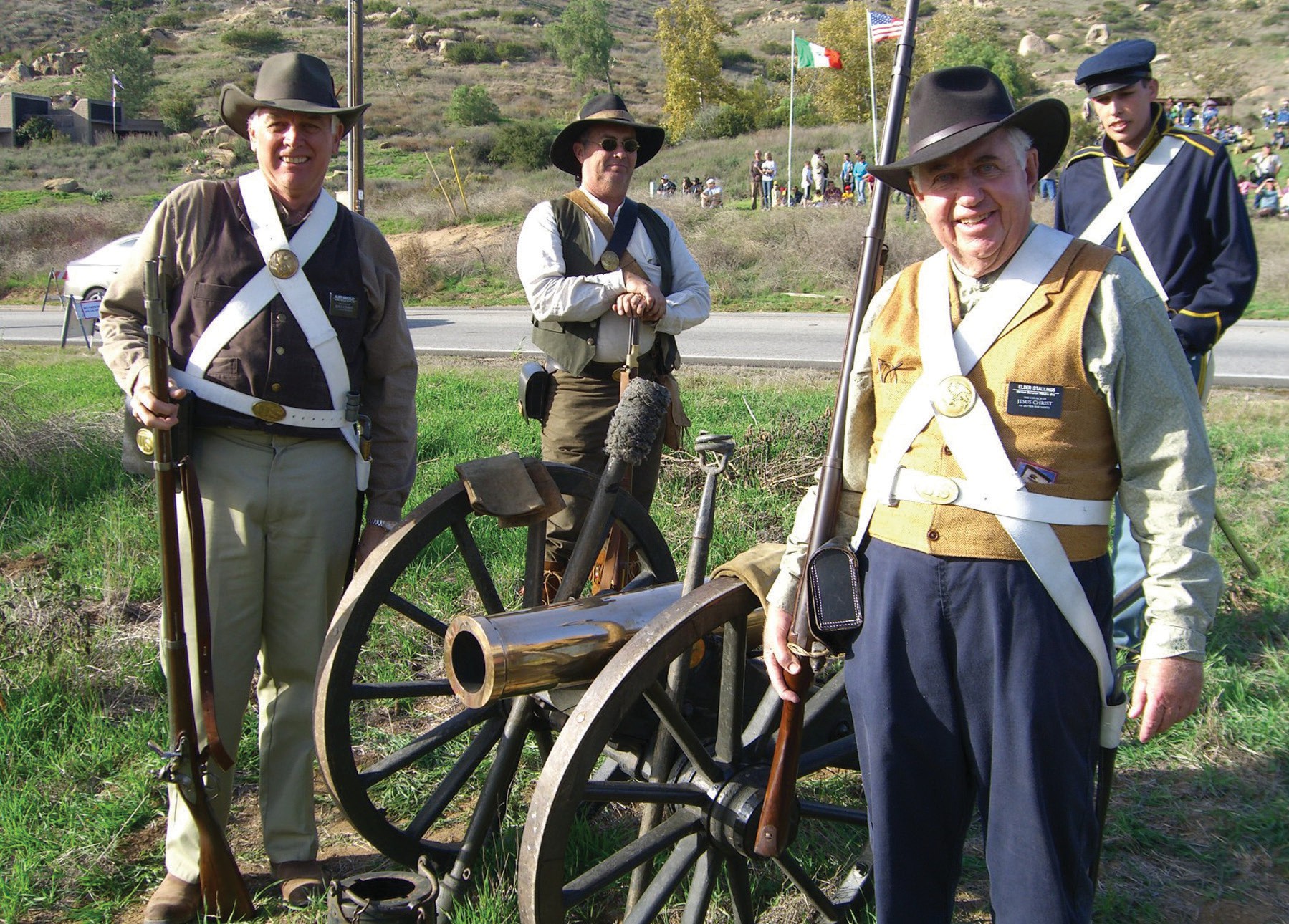 This Sunday, California State Parks and the San Pasqual Battlefield Volunteer Association will commemorate Battle Day. This is an annual, family friendly, North County event focusing on the interpretation and commemoration of the 1846 Battle of Pasqual, the bloodiest battle fought in California during the U.S. – Mexican War. This year the event will have enhanced living history activities that will transport visitors to the battlefield 170 years ago.

The article below tells a portion of the story of that battle. Note: Information for this article is excerpted from my master’s thesis on the battle: “Why did General Stephen Watts Kearny Engage the Californios at the Battle of San Pasqual?” For those who wish to read further, I have posted the entire paper on the Times-Advocate website: www.escondidotimes-advocate.com/

Stephen Watts Kearny, one of the most highly regarded American army officers of the time, the “father of the U.S. cavalry,” led his men into a tactical near disaster against Californio lancers in the December 6, 1846 Battle of San Pasqual. It was a battle he could have and should have avoided.

The weather the night before the battle was very similar to what we’ve been experiencing this week. It rained the night before, rendering many of the firearms employed by the Americans useless because their powder became wet. Nevertheless, the American cavalry advanced in an early morning attack on the Californio ranchers, who were riding some of the finest horses in the world, and who wielded wicked long lances that they normally used to herd cattle. In the short, brutal battle between naked sabers employed by tired cavalrymen riding spavined horses and, in some cases, mules, and the magnificently mounted ranchers, casualties were very one sided.

Kearny’s battle and his decision to engage in it remain controversial to this day.

Why did Kearny lead his dragoons of the Army of the West against the “Californio” lancers in revolt against the occupying Americans at San Pasqual on December 6, 1846 when he could have avoided battle, joined forces with the U.S. Navy occupying San Diego, and dealt with the revolt from a position of strength?

There are three possible explanations: 1) Kearny desperately needed fresh horses since his men rode mounts broken by crossing the Mojave Desert, while the Californios, commanded by General Pio Pico, had high quality horses in abundance that Kearny believed he could seize by a bold stroke. 2) Colonel Christopher “Kit” Carson, a famous scout employed by the U.S. Army, and U.S. Marine Captain Archibald Gillespie, a spy President James K. Polk sent to help bring California into the Union, erroneously advised Kearny that the Californios would not fight, convincing Kearny that 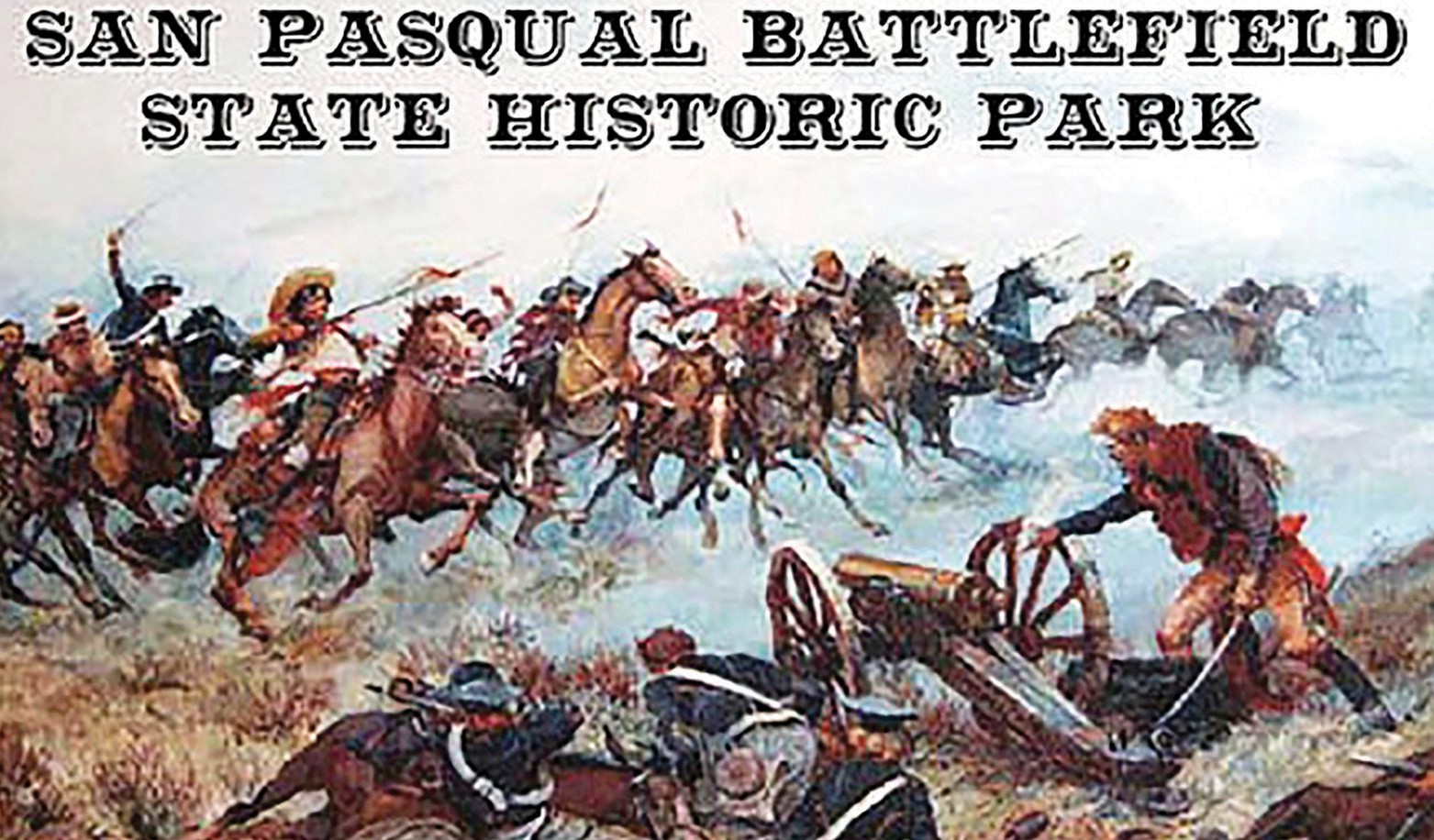 they were easy prey. 3) Despite his rank and ten years on the frontier policing Indian tribes, Kearny had never fought a cavalry battle. This led him to make errors in judgment in the fast-moving environment of a meeting engagement, so that he lost control of his men almost from the outset.

The Mexican-American War was arguably the most successful war the United States fought in its history in terms of territorial gain. The Battle of San Pasqual was the largest battle of the war fought on land that would later become part of the United States. The numbers involved were small — about one hundred and twenty men on each side — compared to other famous clashes along the Rio Grande and in Mexico’s interior where American armies consistently beat larger Mexican armies. Among the least successful battles of that war, (from an American perspective), San Pasqual forever tarnished the sterling reputation of General Stephen Watts Kearny, who to date had won a flawless record of thirty-six years of service. Although he lost half of his men killed or wounded in fifteen minutes of hand-to-hand combat to ranchers armed with lances and a few muskets, Kearny claimed victory because he held the field at the end of the fight. Few challenged this claim, because within weeks California joined the union.

Interestingly enough, although Kearny had a great reputation as the “father of the U.S. Cavalry,” he never fought a cavalry engagement before this one.

Kearny’s career up to this point was one of impressing a long line of superiors with his competence in building forts, handling delicate negotiations with Indian tribes, writing a field manual for the newly established cavalry regiment and fielding well-disciplined troops. One such commanding officer remarked at one point that he had never seen better soldiers. A peacetime army overachiever and master of infrastructure, he was not necessarily a warrior. Only once, during the War of 1812, do historical records show him in combat —  infantry combat.

Although he had an exemplary peacetime career, I would argue that his inexperience in cavalry combat was key to his decision to engage the enemy at San Pasqual.

The battle followed up on the march of Kearny’s Army of the West from Fort Leavenworth through what became the American Southwest, a bloodless triumph that transferred most of the province of New Mexico into U.S. hands. The army’s fortunes changed when it encountered Kit Carson. Kearny decided to take one third of his remaining force — about one hundred dragoons — and cross the Mojave Desert into California. He found a province in revolt against the occupying Americans — a fact that imperiled his dragoons. The arrival of Captain Archibald Gillespie 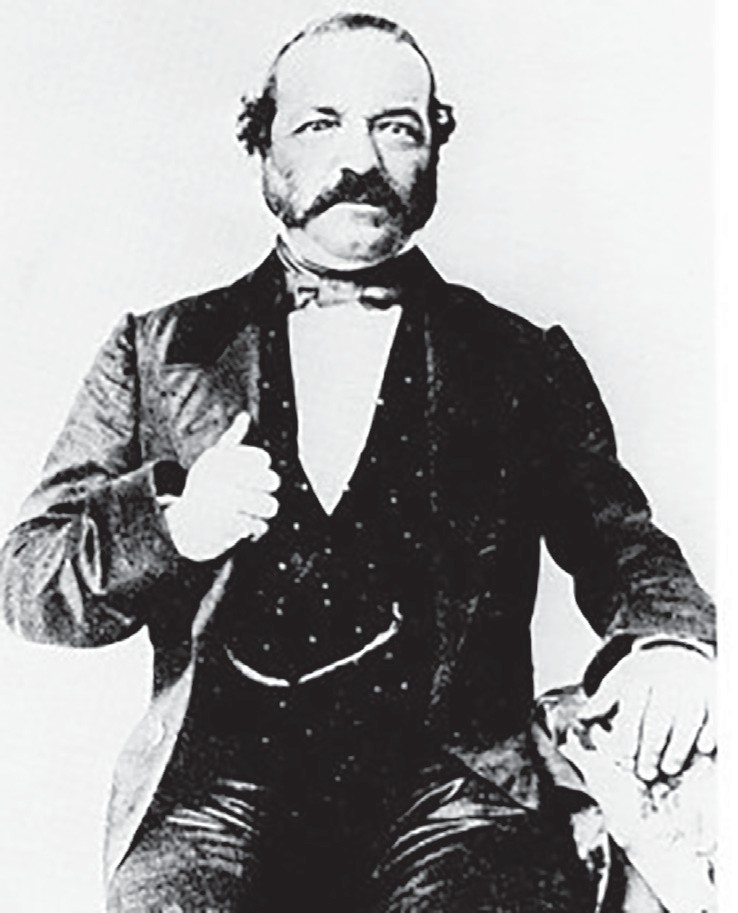 General Andres Pico, who commanded the Californios at the Battle of San Pasqual.

with his thirty-six volunteers from San Diego highlighted that danger. I argue that after Kearny’s easy conquest of the Southwest, combined with bad advice from Gillespie and Carson, he underestimated his opponents.

As to the why of the battle: The evidence is pretty clear that Kearny engaged the enemy to seize badly needed horses. That decision carried in it the seeds of his disaster. It was a battle Kearny did not have to fight. He could have gone to San Diego, combined forces with Commodore Robert Stockton — and then attacked Pico. His rejection of that course of action and the resulting defeat underscored Kearny’s inexperience in fighting cavalry battles.

Limited research examines Kearny’s lack of combat experience, except as a lieutenant of infantry in the War of 1812, and never leading cavalry, and whether it contributed to his lapse of judgment in this fast-moving meeting engagement against a foe armed with lances, a weapon his men did not train to fight. No one hints at the possibility that Kearny did not fight a cavalry action before December 1846. In fact, Arthur Woodward, the historian who wrote about the battle the most thoroughly, in 1947 (“Lances at San Pasqual.”) questioned why such an experienced Indian fighter and veteran could have made such a tactical blunder.

It is understandable that no historian offers this theory, since on its face it seems an absurd assertion to make about the “Father of Cavalry,” as contemporaries called Kearny. His experience combined expeditions of exploration and frequent patrols to impress the Indians with American power during a brief interlude of relative peace between the United States and its original inhabitants. He fought no battles, although he came close repeatedly.

One historian, Kearny’s biographer Dwight Clarke (“Stephen Watts Kearny: Soldier of the West”) published the only modern documentary of the general. Clarke inadvertently provides evidence for Kearny’s inexperience in combat — but does not make the obvious connection. Instead, he attributes Kearny’s decision to engage the Californios at a disadvantage almost entirely to the need for fresh horses and to the fact that two previous raids to obtain fresh mounts were successful and bloodless — making a third raid also promising.

The need for horses qualifies as a motive for the attack while inexperience in cavalry engagements explains why Kearny ignored the advice of several of his officers and launched the attack, and then quickly lost control of his men.

“Kearny’s March: The Epic Creation of the American West,” the first book in fifty years to address Kearny’s accomplishments, puts author Winston Groom firmly in the group who believe that his bloodless march — combined with advice from Gillespie and Carson — convinced Kearny 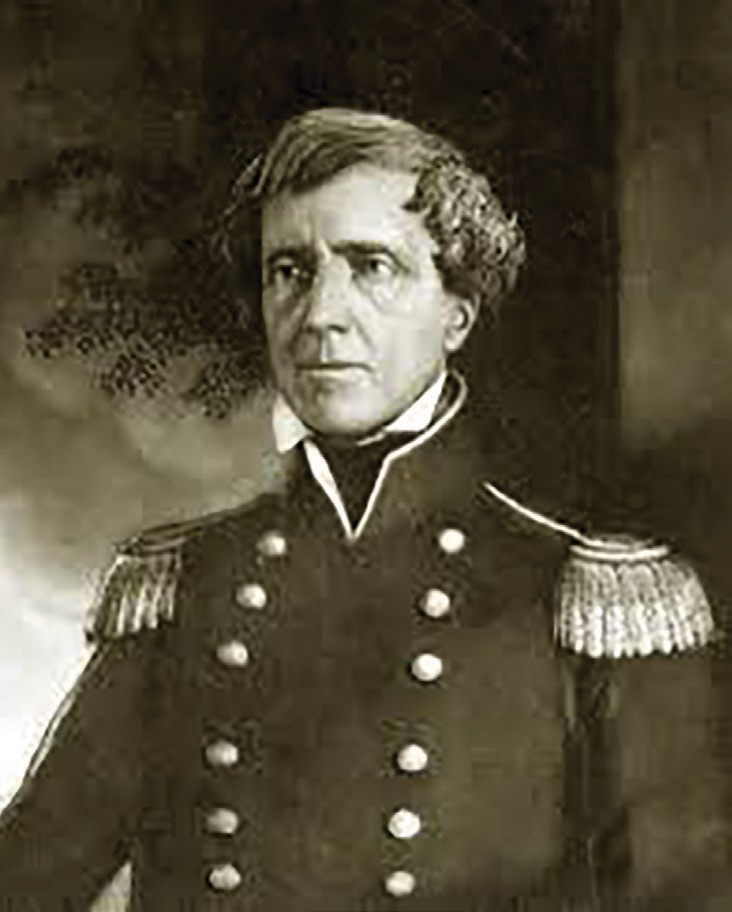 General Stephen Watts Kearny, who led the American forces at the Battle of San Pasqual, December 6, 1846.

that Mexicans (and Californios), would not fight. When Mexican armies did face Kearny, they melted away. Gillespie and Carson’s prediction: “that the Mexicans would run at the first sign of an organized attack by well-mounted, well-armed force of U.S. Cavalry” is consistent with Kearny’s experience. However, Kearny’s men were not well mounted or well-armed, adds Groom.

The group of historians who assert that Kearny attacked the Californios because he needed horses spans the decades, beginning with Albert Brackett’s

“History of the United States Cavalry.” Brooks, in his contemporary history of the Mexican War, indirectly argues for Kearny’s need by emphasizing the hardship the army’s horses endured crossing the desert. George Hruby, a modern expert on the battlefield site, is adamant that the need for horses drove the attack. In two letters, he provides detailed information on why Kearny might have attacked on the morning of December 6, 1846. He concludes: “The reason that Kearny made a decision to attack San Pasqual was to secure horses for his Dragoons. The reason for the battle of San Pasqual was because of ‘horses.’ Men died in battle for … ‘horses.’ ”

We will, of course, never know for sure what Kearny’s motives were in launching the ill-formed attack. Such mysteries provide fodder for historians down through the ages.

Although Kearny came ran headlong into a battle that could have led to his destruction, ultimately his march across the Southwest was almost completely successful.

As Winston Groom concludes in his book about Kearny’s epic march, “From the day Stephen Kearny rode out of Fort Leavenworth on that bright June morning in 1846, wherever he went became the United States of America.”

Those who wish to get a flavor of this battle should attend Sunday’s “Battle Day,” activities at the San Pasqual Battlefield museum.

On Battle Day visitors will have the opportunity to view the cannon crew fire a twelve-pound Mountain Howitzer.

Listen to the “Battle Story” told through eyes of a Dragoon and a Californio.

Experience life as a new recruit, as participants go through a 19th century military enlistment station.

Smell the aroma of period food as the camp cook prepares salt pork and beans for the hungry troops.

Walk through the encampment area and witness life among the soldiers.