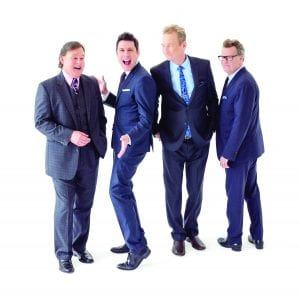 “Whose Live Anyway?” is one of the California Center for the Arts, Escondido’s all-time favorites returns with an all-star cast and non-stop laughs January 25.

At this point most of us have seen the hit TV show, “Whose Line Is It Anyway?” It gave improv comedy household fame and taught millions of people that humor is best served quickly.

Well, the legends that made that show what it was have reunited and are taking their act to the stage. Original members of the hit comedy improv show, Ryan Stiles and Greg Proops bring together a fearless foursome for an evening of games, songs and scenes all completely improvised right in front of your eyes! Based on audience suggestions watch these masters of comedy create a show that will leave you laughing the entire drive home.

The touring cast includes Whose Line veterans Ryan Stiles, Greg Proops, and Jeff B. Davis. Stiles and Proops both first joined the show back in its BBC days in the mid-1990s alongside the giants of the genre. They both carved out their own faces on the Mt. Rushmore of fast-paced tomfoolery, and have been mainstays on sitcoms like “The Drew Carey Show,” “Two and a Half Men,” and “Just Shoot Me.” Joining the cast for this tour only is comedy veteran and Second City alum Joel Murray! Murray has gone from hilarious performances on shows like “Dharma & Greg” and “Still Standing” to dramatic turns on the award-winning “Mad Men” and “The Leftovers.”

This exciting and hilarious show has sold out every single time they visit Escondido, so don’t miss your chance to see the comedy magic come to life.