‘Who is that beautiful girl?’ A Valentine’s Day story 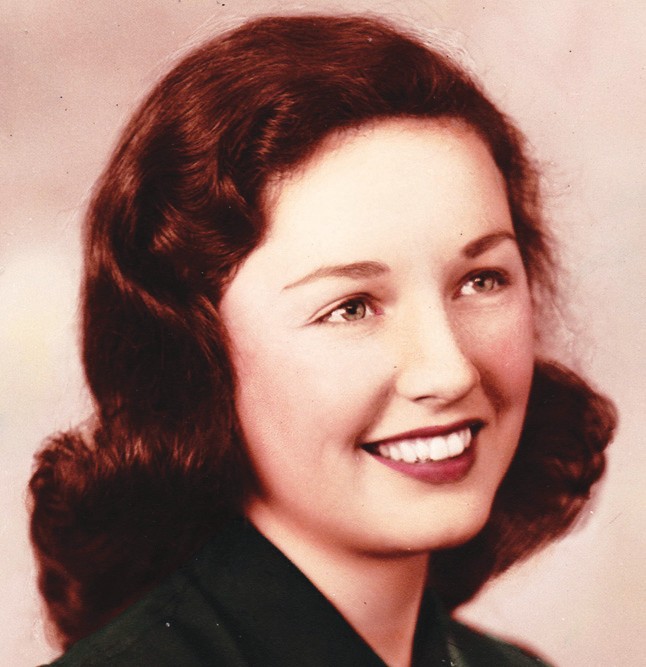 Kay Lyall, of Pauma Valley, who married her sweetheart Chuck, more than 60 years ago.

As Valentine’s Day approaches, I find myself thinking of Chuck and Kay Lyall. They were married just before Valentine’s Day over 60 years ago, and the story of how they met and came to be married is the sweetest love story I’ve ever heard. With their family’s permission, here is their story:

Their life together began in 1948 when Chuck was a young man in his mid-twenties. He was living in Pauma Valley, CA, working on his family’s citrus ranch, and was ready to get married. However, he hadn’t had much luck with women. But he knew his Bible well, and in James 1:5, God tells us: “If any of you lacks wisdom, ask God, and He will give generously to all who seek Him.” So, Chuck prayed to God and said: “Lord, I am stupid when it comes to women. I pray Lord that you would help me to find a wife.”

Well, the Lord heard Chuck’s prayer, and a short time later, Chuck found himself heading for Northern Michigan with his parents. His grandparents had passed away, and he and his folks needed to go there to finalize the estate. The grandparents’ neighbors had become very close to Chuck’s grandparents, and they graciously invited Chuck and his parents over while they were in town. While sitting in the neighbor’s living room, Chuck became fixated by a picture on wall. The picture was of the most beautiful girl he had ever seen. Being a rather shy and reserved young man, Chuck sat there for quite a while before finally getting up the courage to ask his hosts, “Who is the beautiful girl in that picture?” “That’s our daughter, Beanie. She just moved to Evanston, Illinois to stay with her sister and brother-in-law. She’s planning to get a job and live there. You just missed meeting her by a couple of days.”

Well, Chuck returned home to Pauma Valley, but he could not stop thinking about the girl in the picture. Back in 1948, phone calls were really expensive and the internet didn’t exist, so Chuck wrote to Beanie’s father, and asked for permission to write to her in Illinois. Then he waited for a reply. What seemed like years went by before Chuck got a letter from Beanie’s father providing her address, and giving his blessing to write to his daughter. Chuck remembers that moment: “I was so happy when I got that letter!” He wasted no time in writing to the most beautiful girl he had ever seen.

Kay, aka “Beanie” was settling into her new home in Illinois and had gotten a job. On New Years Day of 1949, she and her sister called their parents after several unsuccessful attempts at getting through on Christmas Day. During this call, her parents told her that some boy from California was going to write to her, and that she’d better write him back. She couldn’t believe it! Just a few years earlier Kay and her sister had wanted to write to soldiers during WWII and her parent quickly squelched that plan. Kay’s father was a lighthouse keeper, and Kay and her sister had spent their years growing up in or near lighthouses – meaning sailors were always nearby. Her father’s occupation often included having to throw drunken sailors out of bars and public places. He cautioned his daughters often to stay away from such men, and was very protective about his daughters. And now her father was actually encouraging her to write to a man! Needless to say, Kay was intrigued about this man who had gained her parent’s trust.

Soon after that phone call, the promised letter from Chuck arrived, including a few snapshots of himself and his home in Pauma Valley. Being the obedient daughter that she was, Kay wrote back, and Chuck and Kay’s long distance courtship began. Throughout the spring and summer of 1949, they continued to mail letters back and forth, slowly getting to know each other a little better. In the late summer of 1949, Chuck invited Kay to come to California to spend some time with him and his family. Kay bought a plane ticket to Los Angeles with money she had been saving for a sewing machine, and after arranging to take time off work, found herself flying across the country to finally meet the man who had made such an impression upon her parents.

Back in 1949, it was a very bold thing for a woman to hop on a plane to go see a man. It was rather shocking actually! As Kay flew from Chicago to Los Angeles, she wondered if Chuck would be there when she arrived. What would she do if he wasn’t there? She had no back-up plan. And Chuck remembers driving to the Los Angeles airport to pick up Kay, wondering if she would even be on the plane. What if she got cold feet? What if she didn’t like the way he looked? When the plane landed, he stood there for what seemed like hours, watching the other passengers exit, waiting to see if Kay was on the plane. And then the moment came. The most beautiful girl he had ever seen appeared in the doorway of the plane. She was really here – for him.

Kay spent the next two weeks on Chuck’s family’s ranch in Pauma Valley. They spent their time talking and getting to know each other, and on their last day together, Chuck turned to Kay and said, “So, when do you think we should get married?” “Next February would be good” she replied. And that’s how they came to be engaged.

Chuck and Kay were married on February 4, 1950. They spent the next 64 years together, raising a family and serving the Lord, with Kay’s mantra being “I’ll have time to rest when I’m in Heaven.” Their legacy of faith has been passed on not only to four generations of Lyalls, but also countless families in the Pauma Valley/Valley Center community. When Kay passed away in May of 2014, the church was packed with hundreds of people, wanting to say goodbye to the most beautiful girl Chuck had ever seen. The truth is Kay was not just beautiful on the outside: her love for the Lord was so genuine and contagious; you couldn’t help but respond to her love.

The picture that captured Chuck’s heart – the one of “the most beautiful girl I’d ever seen” – hangs in Chuck’s bedroom. He looks at it often, wondering how he got so lucky as to have Kay for his bride for over 64 years. Then he remembers his prayer to God long ago, and he knows that it was God who brought Kay to be with him. As Valentine’s Day approaches, my prayer is that God will bring Chuck home to Heaven to be with his bride forever.

Chuck and Kay loved each other, but their love was possible because they both loved and trusted the Lord with all their hearts. On this Valentine’s Day, I hope you know that God loves you just as much. No matter where you’ve been, or what you’ve done, His grace and mercy is there for you. He can change your life like He changed Chuck’s. All you have to do is pray, and say, “Lord, I am stupid when it comes to. . .”