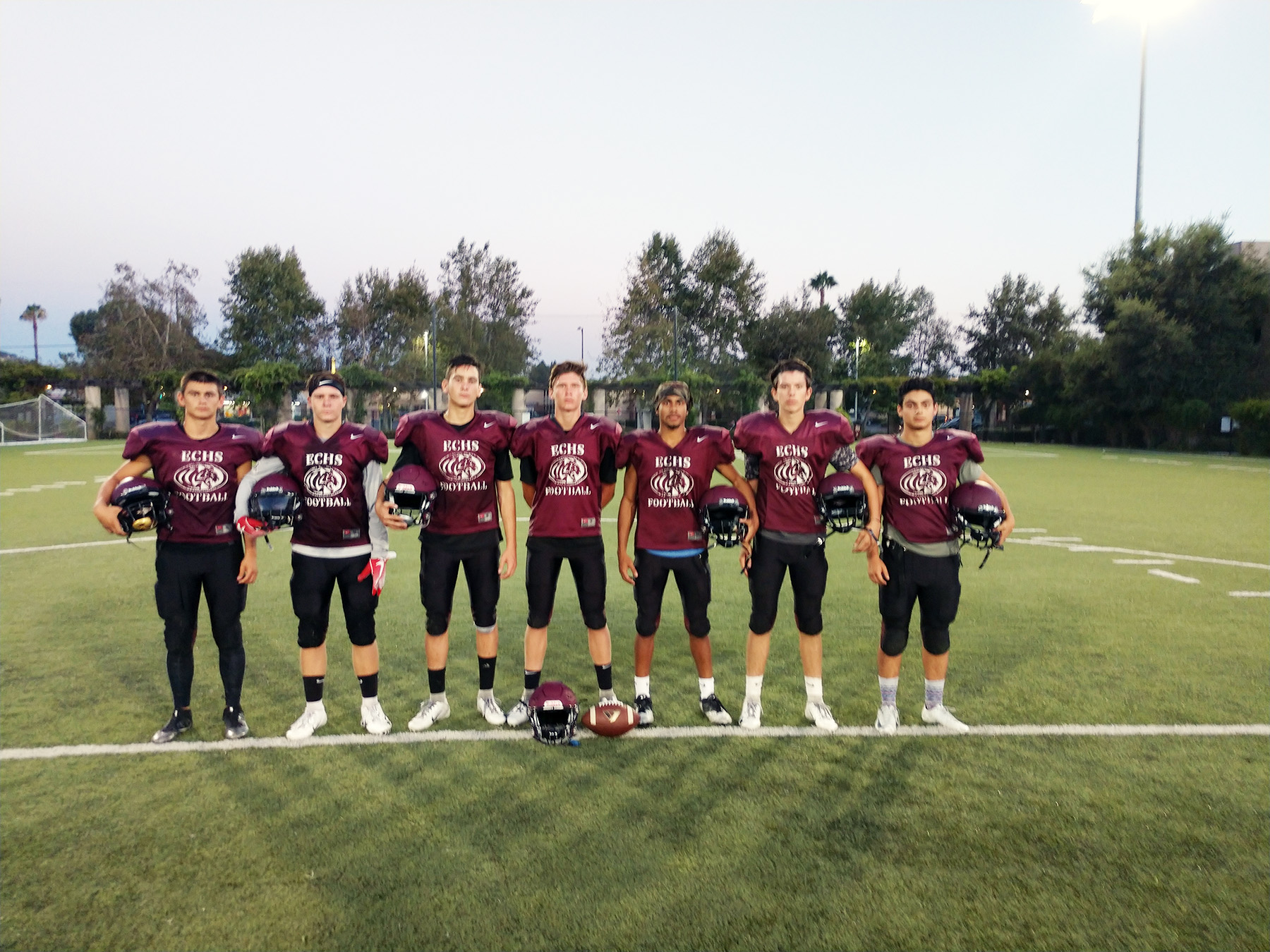 Last season was a testing one for the football team at Escondido Charter that went winless in 10 games.

Because of a myriad of factors that included a lot of inexperience and significant turnover and change, things just never really came together. But valuable lessons were learned, young players had their feet put to the fire and plenty of growth took place.

A year later, the White Tigers figure to be totally different animals. Armed with the slogan “Contend to Win” and empowered by a core of bona fide team leaders, head coach Greg Brose expects his charges to “do things a whole lot better.” And convinced by tangible evidence that has manifested itself in a number of different ways, Brose sees no reason why EC can’t experience a dramatic turnaround that will have it chasing a league title and hunting down a Division 5 playoff berth. “I think we’ve got what it takes to do well,” says Brose with conviction. “In some respects, the sky could be the limit.”

There no doubting that the signs are there for what could be a real reversal from 2017. Thanks to the determined efforts of strength and conditioning coach Denaryle Williams, the Tigers will enter the season honed, strong and in great shape.

An encouraging showing in the 7-on -7 passing league also suggests that the offense that will be steered by creative coordinator Bob Schulty has the wherewithal to be quite productive. Moreover, the back seven in Charter’s 4-4-3 defensive deployment is very skilled and athletic and that should lead to a more assertive approach.

When it possesses the ball, Charter will run out of multiple formations in order to offer the opposition different looks. The quarterbacking duties will be shared by Georgiy Begaliyev and Chase MacMahon with specific packages geared to each of their particular strengths. Both are skilled athletes, smart and capable of getting it done either on the ground or through the air. While Begaliyev has a knack for reading defenses, MacMahon brings a determination that is conspicuous.

A nice stable of running backs should allow the White Tigers to pick up substantial yardage when toting the rock. Sophomore Rhiggs Relatores, Ivan Rubio and Matt Shams all combine speed and power while Aristotle Douglas’s agility is his main calling card.

As for the receiving corps, look for junior Shane L’Etoile with his tremendous hands, quicks and instincts to gather in plenty of receptions with sophomore Jaxsyn Sealey, Justin Boissy and the versatile Douglas also getting in on the act as pass receivers. The tight end spot should make a contribution to the aerial game as well with limber 6’2”Aaron Bolas offering a nice target for his quarterbacks.

Upfront, the offensive line should be able to hold its own with almost all its members capable of manning multiple positions. The unquestioned leader in the pits is guard/center Sam Lawson, a heady sort gifted with agility, strength and speed. The hardworking and intelligent Ethan Roberts can also double at either center or guard. A pair of sophomores in the personages of athletic Adrian Moreno (guard/tackle) and the sizeable Connor Wise are expected to make their presence felt. And senior Kris Ventura, a good athlete with keen instincts to match, will be very much a part of the O-line rotation.

Before turning to the outlook for the defense, a salient point should be to be made at this juncture. Because of the small pool in terms of  numbers available to Esco Charter (just 39 athletes are involved in the varsity and jayvee programs), there is plenty of cross pollination taking place so that many of the White Tigers will be doing double duty and playing prominent roles on both sides of the ball.

One of the main reasons that Brose envisions a renaissance for his squad is because he anticipates a huge step up from a defensive crew that is now more comfortable with its scheme and more adept at providing various looks. Expect EC to be in an aggressive and attacking mindset whenever it sets up shop on defense.

Although the real strength of the “D” is considered to be found elsewhere, the defensive line has the talent to be a legitimate factor. Ends Moreno, Wise and Connor Kritzer are quite capable of disrupting things while inside guys like Lawson and Roberts can clog up the middle and make an impact.

But it’s a rangy, active and aggressive linebacking crew that really gets your attention. At the outside spots are gamers Begaliyev and Shams, the former being the team’s best hitter who simply loves blowing up enemy ball- carriers. On the inside, Bolas is a real comer while Relatores possesses size and is considered to be very solid. The versatile Ventura is also a serviceable part of the linebacker mix.

On the back end, safety L’Etoile sets the tone with his knack for reading plays and his willingness to initiate contact. And at the corners, the physical Rubio and speedy Boissy will be counted on to make their share of plays. Douglas, MacMahon and Sealey are also expected to log some meaningful minutes in the secondary.

Special teams appear be another area in which the White Tigers should have ample confidence. The placekicker MacMahon is the owner of a solid leg and demonstrates good accuracy from 35 yards on in. As for the punting chores, those are the responsibility of Shams who provides sufficient distance and hang time.

When it comes to the return game, it will be the dangerous L’Etoile returning punts while Relatores, Douglas and Rubio will alternate bringing back kickoffs.

With players like Begaliyev, L’Etoile, Rubio, Lawson, Douglas, Relatores, MacMahon and Shams having been encouraged by Brose to assert themselves, provide real leadership and demand accountability from their teammates, the vibe coming from the White Tigers reeks of positivity.

All indications are that the White Tigers are primed to leave 2017 in the rearview mirror while forging a bright new path towards revival and renewal. It’s going to be most interesting to see exactly how far they can go.