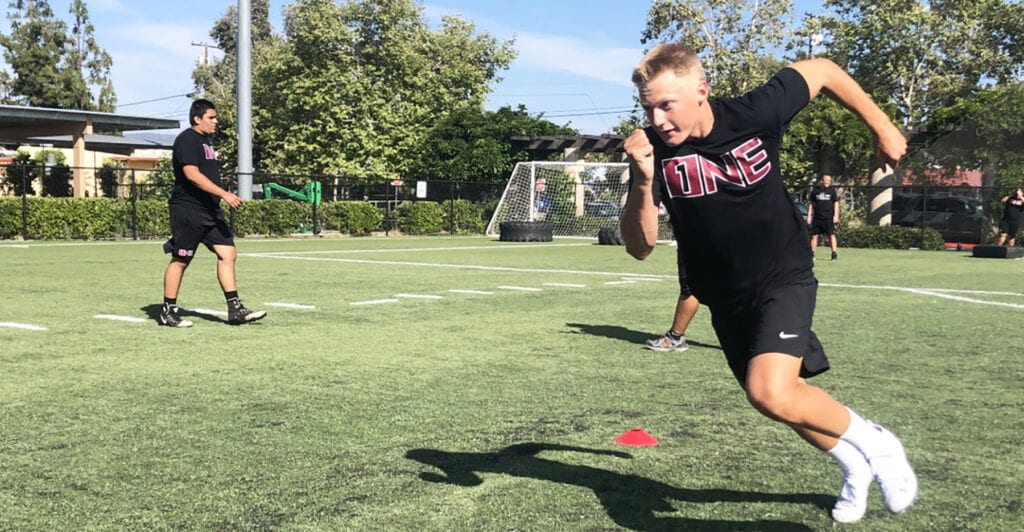 EC linebacker John Scates, expected to be a defensive mainstay, pushes himself during a conditioning drill.

For a myriad of reasons too lengthy to detail here, the Escondido Charter football team was lost in the wilderness during the 2017 and ’18 seasons, posting an exceedingly disheartening collective record of 1 and 19.

Knowing that something dramatic was required in order to stop the bleeding and hopefully usher in a new era, EC athletic director Greg Brose decided to reach out to Classical Academy’s successful and revered coach Jon Goodman and leave in his capable hands the task of a major resuscitation and revival.

Those in the know figured that Goodman was, based on all indications, the perfect man for the job. Organized, knowledgeable and with a true concern for his players that goes far beyond a football field, it didn’t take long before Goodman had stamped his imprint on the program and had his guys believing that better times were in the offing.

Not only did Charter show dramatic improvement in Goodman’s first year at the tiller by winning three games but the team was only a few plays removed from potentially adding two or three more victories to that total. No longer content to just survive, these White Tigers were competitive and full of spunk. A new mindset had taken hold. “I was so proud as a coach to see that team’s growth,” says Goodman

And so as a new season beckons, EC looks poised to build on a promising foundation and take the necessary steps forward towards even further relevance.

Their 2021 campaign will feature a 10-game schedule (no bye) that kicks off with a road contest versus Temecula Prep on January 8. In addition to a pair of Saturday contests, the White Tigers will also tangle with Esco neighbors Orange Glen (1-29) and Classical (3-12).

As with every other team in the County, the coronavirus certainly affected how Charter has had to operate. But through Zoom meetings in the spring and limited conditioning workouts in June, September and October, Goodman has been able to keep somewhat of an eye on his charges.

And if all goes according to plan, the White Tigers hope to ramp things up in November with three weekly workouts which expect to finally incorporate the use of a football. Up to now, because of the concern about the possibility of transmitting the virus via multiple handlings of the pigskin, the ball has been taken out of the equation.

Making sure that the players’ safety was the uppermost consideration during the aforementioned sessions, Goodman guesstimates he pored over 200 pages of material related to COVID-19 guidelines and protocols. As a result, great pains were taken to ensure that proper separation was maintained during drills, rotations were kept to a minimum and that various locales of the Charter campus were utilized to keep the players sufficiently spread out.

Fulltime practice is slated to begin in mid-December and the coach anticipates having a varsity of about 38 players—with upperclassmen occupying just seven or eight roster spots. Much like 2019, the Tigers will again be a conspicuous example of youth being served. Reflective of Charter’s precociousness was a game last year against Maranatha in which the starting defense was comprised of six freshman and four sophomores. It doesn’t get much more newbie than that.

If the White Tigers are to make the progression they fully anticipate, then their single-back, run-oriented offense figures to be a big part of the reason why. Watch for EC to be able to run both inside and out with bootlegs and keepers also being components of the attack. Goodman is a huge believer in having a stout ground game and good naturedly calls himself “Rob Gilster South,” in reference to the acclaimed Valley Center head man who places a heavy emphasis on toting the rock. Goodman was able to observe first-hand how Gilster was able to make the run game a highly effective staple—having been a former assistant under the longtime VC coach.

The running back counted on to be Charter’s offensive catalyst and a real workhorse will be Rhiggs Relatores, a hardnosed kid imbued with a host of enviable traits including speed, vision, true grit and a tangible passion for the game. Goodman is so impressed by Relatores’s upside that he feels this talented senior has wherewithal to be one of the County’s leaders in rushing yards by season’s end.

And though Relatores is understandably expected to get a lion’s share of the carries, look for backups Travis Mitchell, Danny Lopez and Rhiggs’s younger brother Rhett to get opportunities to make a contribution as well.

But for the rushing attack to reach its potential and be a consistent force, the guys upfront must exert their influence. And that possibility certainly exists, given the ample size that the line possesses. The main anchors in the pits are projected to be physical tackle Adam Pincock and heady center Mark Garcia. An indication of the versatility of this duo is the fact that each could also see some playing time at tight end.

As for who will be the quarterback, that decision is still forthcoming but Goodman feels he can win with either of the two candidates vying for the job. In junior Rocko Huntsman, Charter has an intelligent, hardworking player who can get it done whether he keeps the ball or is called upon to throw. Meanwhile, John Gallagher offers height, determination and the requisite skills needed to guide an offense.

Should the offense produce as hoped, its counterparts on the opposite side of the ball will nonetheless need to do their share and hold their own if the White Tigers are to continue their ascent and revitalization.

Look for gifted linebacker John Scates to be the ringleader when EC is defending. A devoted student of the game who puts in serious time studying film, Scates knows how to translate what he sees on the screen into impactful results. Able to decipher plays and then aggressively stick his nose into the fray, Scates has oft times had Goodman categorizing his efforts as “phenomenal.”

And the D-line should definitely factor into the equation with athletic and aggressive sophomore Abraham Saucedo setting the tone.

Finally, Goodman thinks that from an overall standpoint, the special teams have the ability to show well. Specifically, the multi-dimensional Campbell appears solid as both a placekicker and punter.

As with all prep football coaches in California, trying to work through the intricacies of the pandemic issue has definitely been a challenge for Goodman. Whenever youngsters are restricted in their ability to exercise, get out in the fresh air and stay active, problems can occur. “There’s a danger with idleness and not being able to do a lot,” relates Goodman. “In that case and without some sort of structure, the mental health of young people can be affected.”

But amidst these trying times, Goodman has noticed a deepening of the feelings his players have for one another. Their relationships have become more purposeful and there’s been an increased desire to reach out and support teammates in any way possible. While working through the reality of unprecedented circumstances, their bond has deepened and a brotherhood has been fortified. “They have truly come to love each other,” says the coach.

Obviously, having his White Tigers being uber competitive and winning games is an objective that Goodman earnestly seeks. But in the big picture, there’s a much more profound goal that drives him. “When it comes to focus and purpose, I see my main role as helping to develop young people of character and empathy,” Goodman reveals. “Individuals who in ten years will prove to be great husbands and fathers capable of making a real contribution to their community.”

Whether it’s creating an environment that will nurture first-class citizens or fostering a culture in which consistent on-the-field performance becomes a natural byproduct, Charter seems well positioned to achieve those goals.

Not so long ago, the White Tigers were clearly wandering in the wilderness, desperately searching for a way out. But thanks to Goodman, a valued staff that includes esteemed lieutenants Woody Woods (OC) and Nassar Jones (DC) and a group of committed youngsters, they have regained their footing and are now headed down a most promising and uplifting path.