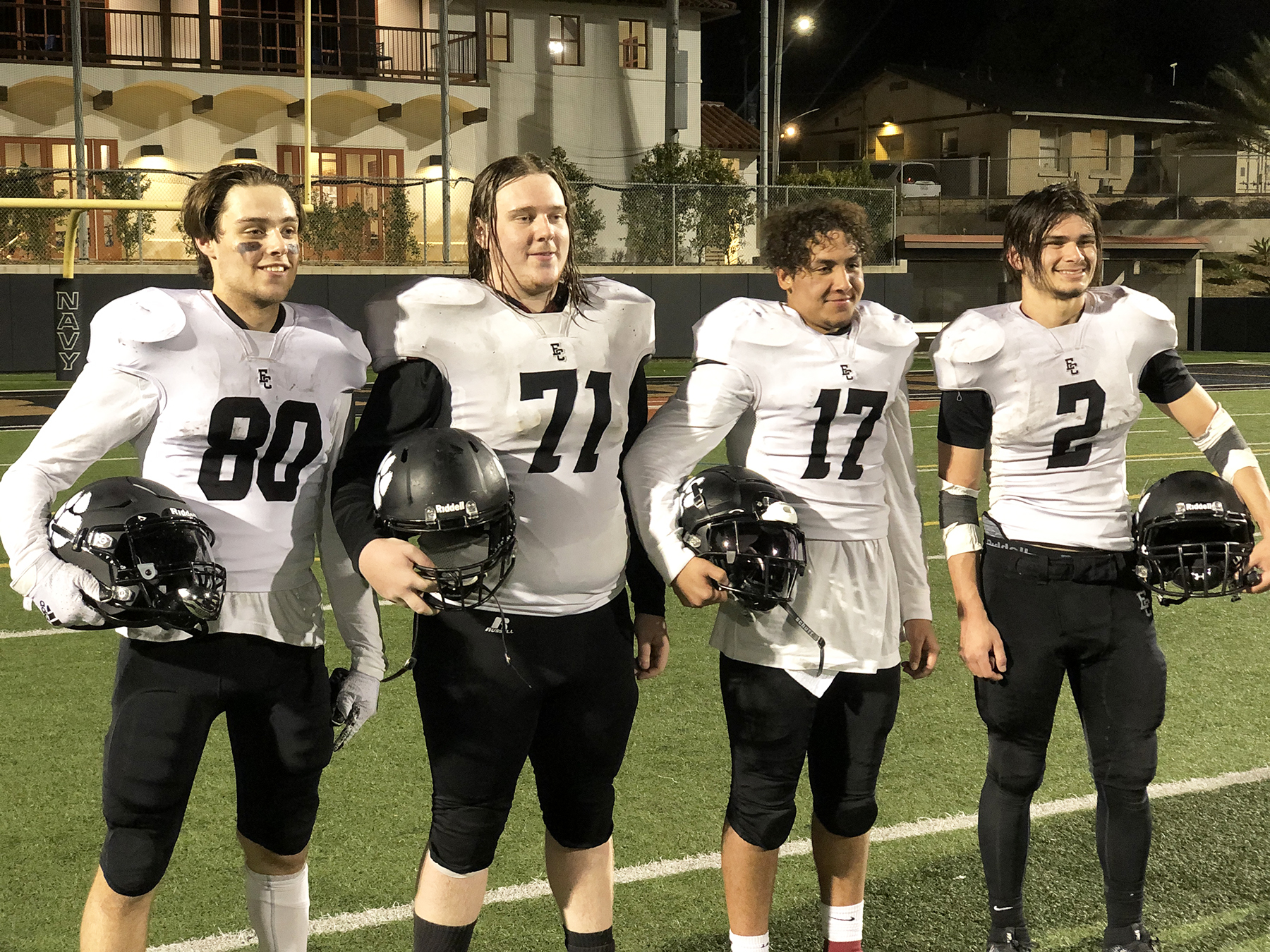 The four seniors that have helped build a new football culture at Escondido Charter. From the left are John Gallegher, Connor Wise, Jaxsyn Sealey and Riggs Relatores.

As far as the results on the scoreboard are concerned, Escondido Charter was hoping for something more positive than the two losses it has suffered thus far at the hands of Army-Navy (14-7) and a talented La Jolla Country Day squad that was coming off a strong 9-4 campaign in 2019.

But though those setbacks weren’t desired outcomes, the White Tigers have nonetheless demonstrated that their compete level under second-year coach Jon Goodman is becoming consistent and conspicuous. And given where the program stood as recently as 2018 when Charter was at its nadir (losing 19 of 20 games) and its very want-to was being questioned, that says volume about Goodman, his staff and a group of youngsters that are intent on creating a new culture and dynamic at the school just off East Valley Parkway.

For example, in their opener versus Army-Navy, the White Tigers demonstrated some of the tangible strides they have made under Goodman’s watch. Yes, EC made its share of mistakes including failing to capitalize on a drive that advanced all the way down to the Warrior 2-yard line before a penalty and subsequent interception derailed it. It certainly wasn’t an errorless performance.

But miscues aside, Goodman commended his players for their expanding football knowledge and making admirable adjustments during the course of the game. Such as when Army-Navy shifted to an unbalanced formation it hadn’t shown either on film or in a prior scrimmage (against Charter no less), the White Tigers readily adapted and soon shut it down. “It was fun to see that,” said Goodman, “because that was a sign of growth on the part of our kids.”

Overall, the coach was genuinely pleased with his team’s defensive effort against the Warriors. “I felt the defense played pretty well,” Goodman shared, “and as a result, we had a very good chance to win.” And as a testament to how the steady progress of his defenders is manifesting itself, the White Tigers are incorporating nearly twice as many defensive calls in their repertoire as they did last season when they weren’t prepared to handle nearly as much responsibility.

To say that the White Tigers are light-years ahead of where they were when Goodman arrived wouldn’t be a stretch. Coming over to EC after a successful five-year stint at Classical Academy, Goodman found a program nearly on life-support, having won just three games in three years.

In essence, EC had to completely start over if it was to shake itself from the doldrums and hope to make the difficult climb back towards relevance and respectability. “We had to try to build the team from ground zero,” said Goodman. “The culture needed to change and to do that was going to take some time.”

In his first year at the helm, Goodman was forced to stress the fundamentals and make sure the team grasped the game’s rudimentary aspects. A solid baseline had to be established before he moved onto a more detailed approach.

And a definite mindset change was also in order, where the team’s sense of brotherhood, comradery and pulling for one another needed to become paramount.

Responding favorably to Goodman’s approach, the White Tigers noticeably improved in 2019 while posting a 3-7 record that also included a couple of near misses.

By any measure, Charter had taken a significant step forward. Moreover, the interest in the program began to rev up. Pressed to find enough players to turn out when he first came aboard, Goodman was delighted that 50-plus candidates showed up seeking a place on the current roster. “Having that many kids participate was a good sign that our program was headed in the right direction,” said Goodman.

Having to maneuver around all the obstacles the coronavirus created made it even tougher for teams like EC that were in the midst of a resurrection and reconstruction. “Yes, I think COVID absolutely affected some of the momentum we were building,” said Goodman. “But I don’t believe in excuses. We have learned to grind through it. We have learned to persevere and that has helped us develop some real character.”

Which brings us to the present. To say that the White Tigers are on the young side would be putting it mildly. The senior and junior classes number just four players apiece. For a majority of the contest versus Army- Navy, the EC defense was comprised of an eye-opening nine underclassman. It doesn’t get much more precocious than that.

And yet, there is plenty of promise among this young contingent. The sophomore unit is particularly talented. Inside linebacker John Scates (9 total tackles versus A-N) is downright ravenous when it comes to film study and is considered by his coach to be the anchor of the defense.

Meanwhile, the heady Jorden Campbell is a two-way starter capable of making an impact on either side of the ball. Then there’s AJ Goodman, who has proven himself not only at guard but at defensive end as well. In addition, Jacob Semisi has earned his stripes at center with both his smarts and competence. Danny Lopez is another soph deserving of mention because he is pulling off a remarkable feat: Not only is he making a contribution on the gridiron but he is simultaneously toiling for both the basketball and baseball teams.

Not to be overlooked, a couple of freshman are also carving out an identity. Aston Pincock is getting the job done while operating on both sides of the line while Nick Taylor has elicited  plaudits from Goodwin for his laudable efforts at the drop end position.

Turning to the upperclassmen, a trio of juniors stand out. Rocko Huntsman, who threw for 153 yards against the Warriors, is a diligent and tough quarterback who has plenty of upside and should be a force once he gains a little more experience.  And while the athletic Keith Loper has been a stalwart at the free safety spot, rugged Adam Pincock is an offensive tackle of distinction because of his consistent motor and ability to pancake opponents.

But it is the seniors that have truly set the tone with their tremendous commitment, willingness to mentor fellow teammates and their complete buy-in as it relates to the culture Goodman has been fostering. It all starts with Riggs Relatores (113 total yards, 1TD vs. A-N), a tenacious and hardnosed running back who epitomizes a positive role model. Since the White Tigers offense emphasizes the run twice as much as the pass, having a workhorse back is a top priority and Relatores fits that role to a tee. How good is Relatores? Goodman believes his star runner could have led the entire County in rushing if he’d been the beneficiary of a full season and not an abbreviated one.

Another senior of great influence has been Jaxsyn Sealey, a 165-pound dynamo who can go both ways but who exerts his greatest influence as a linebacker. A vocal leader capable of making plenty of plays and getting his teammates situated right, Sealey is rock solid.

The remaining seniors that will leave having made a real impression are Connor Wise, a highly efficient tackle and the versatile John Gallegher.

Because the White Tigers’ game with Foothills Christian was cancelled due to the Knights’ inability to safely field a team, Charter will end up playing an even more abbreviated schedule of just four official games; including this week’s contest against neighboring Classical Academy. And yes, Goodman is willing to admit that “it is kind of weird playing in March and April.”

But he’s ready to make the most of what’s left of this truncated season by not only trying to send his seniors out in style but by providing his younger athletes with even more valuable seasoning so that come next fall, a real breakthrough (record-wise) might be realized.

Goodman has always been a big-picture guy and as such, he knows that creating a meaningful and sustainable culture doesn’t happen overnight. It’s a gradual process but the White Tigers are certainly headed in the right direction. “The players are definitely executing at a higher level than last year,” Goodman praised. “And they’re learning that we can always control our effort and attitude and believe in the concept of playing as one.”

Goodman stresses that conditioning the body, motivating the mind and reaching the heart are all equally important components essential to any football rebuild. Accomplish all three of those goals and you are definitely on your way back from the abyss.

Thanks to Goodman and his determined players, the White Tigers look to be on much firmer footing than before with the traction expected to get even better as the culture continues to take hold in the ensuing months and years ahead.