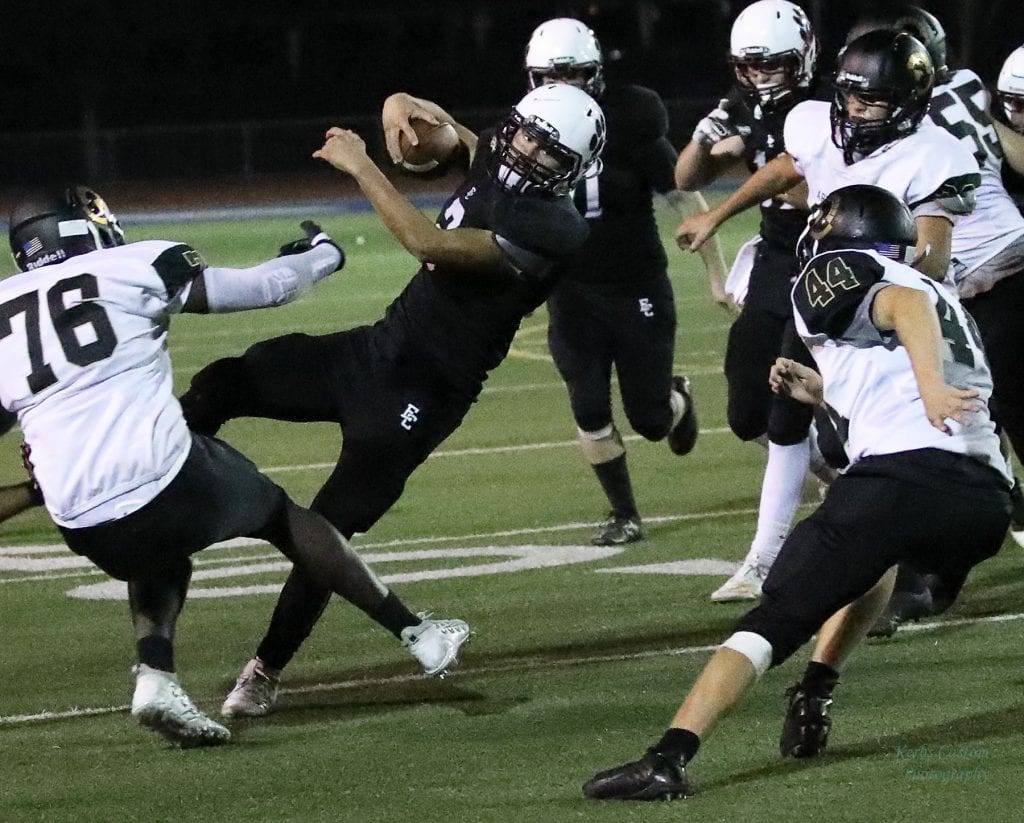 Reliable Rhiggs Relatores, who gained 116 yards on the ground, tries to stay upright as a trio of Warriors close in.

In yet another example that they have awakened from a deep football slumber that lasted the previous two seasons, the Escondido Charter White Tigers added yet another victory to their 2019 resume with a 24-0 shutout win over visiting Army-Navy last Saturday night.

With their latest triumph, the White Tigers evened their overall record at 3-3 but perhaps even more importantly, they kicked off the Pacific (League) portion of their schedule with an all-around performance that suggested that coach Jon Goodman’s squad could be a real factor in that circuit.

An indication of just how far EC has traveled in this resurgent campaign is to realize that this was a team that found victories – for a variety of reasons – exceedingly hard to come by as evidenced by the fact that from 2017-18, the White Tigers won but one contest. There was no denying that the program was scuffling and desperately searching for answers.

But in what is proving to be an enlightened move, EC went out and secured the services of the accomplished Goodman who had experienced notable success at nearby Classical Academy.

And with Goodman came a new vibe, a fresh outlook and an inspiring vision of what White Tiger football could become, both as individual players and as a unit. Goodman and his committed coaching staff have done a masterful job of getting their athletes to see themselves in a totally different light whereby the possibilities are promising, exciting and many.

And give the young men – many of whom had to endure some truly difficult and trying times – credit for embracing Goodman’s message and then going out and effectively executing it. Right now, it’s all about renewal and revival at the school located off East Valley Parkway. 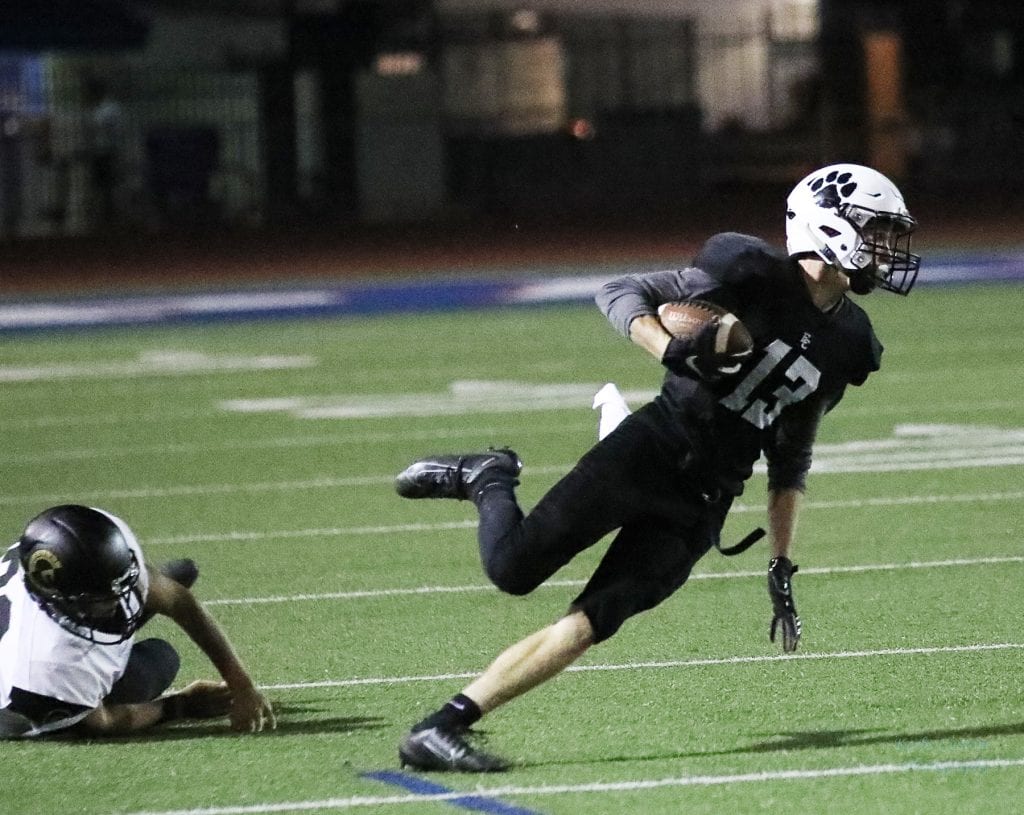 Though their latest success was definitely a team effort that featured significant contributions from a number of players, there was clearly a core of four standouts who paved the way.

Versatile Rhiggs Relatores was a mighty force on both sides of the ball. As a running back, the talented junior parlayed his 17 rushing attempts into 116 hard-earned yards and a score. And when operating as an outside linebacker, Relatores was just as impactful while collecting an interception to go along with his eight tackles.

Senior quarterback Chase MacMahon was another White Tiger who was definitely on the prowl. Not only did MacMahon get it done through the air by tossing for 158 yards and a touchdown but he also rushed for another score. And just to show that his leg can be as potent as his educated arm, Chase punched home a lengthy 40-yard field goal.

The two other frontline performers were athletic Shane L’Etoile; who snared four of MacMahon’s pitches good for a notable 91 yards while active middle linebacker Rocko Huntsman made his presence felt with a pick and five tackles.

The White Tigers will have a chance to add to their impressive resurgence this coming Saturday afternoon when they travel to Maranatha Christian (1-5) in what must be viewed as a very winnable game. And based upon the manner in which this rebounding team has been competing, there is justifiable optimism that EC has the wherewithal to finish strong and earn a playoff berth as the regular season heads towards the home stretch.

Yes, when compared to where they’ve been in the recent past, the White Tigers have come a significant way. And it’s going to be interesting to see just how much further Goodman and his charges can take this ride. But one thing’s for certain and of this there’s no doubt. The White Tigers are definitely back to showing some teeth! 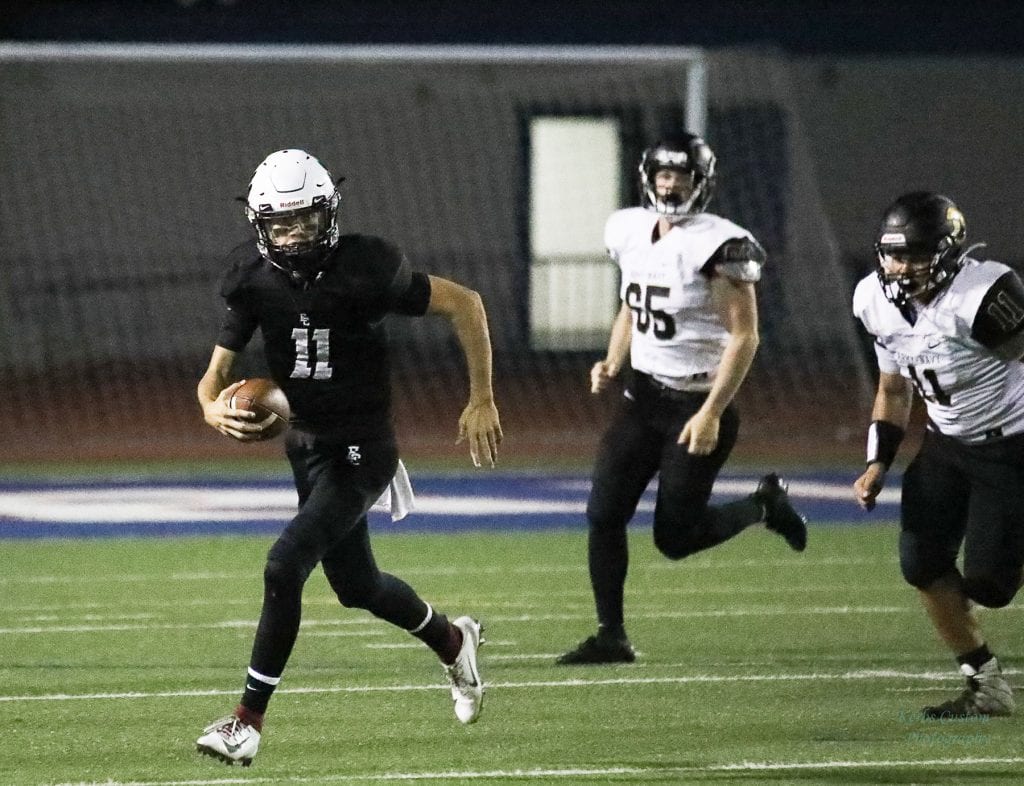 EC quarterback Chase MacMahon, shown here scrambling out of trouble, had a productive night versus Army-Navy throwing for a score and running for another. Photos by Lenny Kerbs