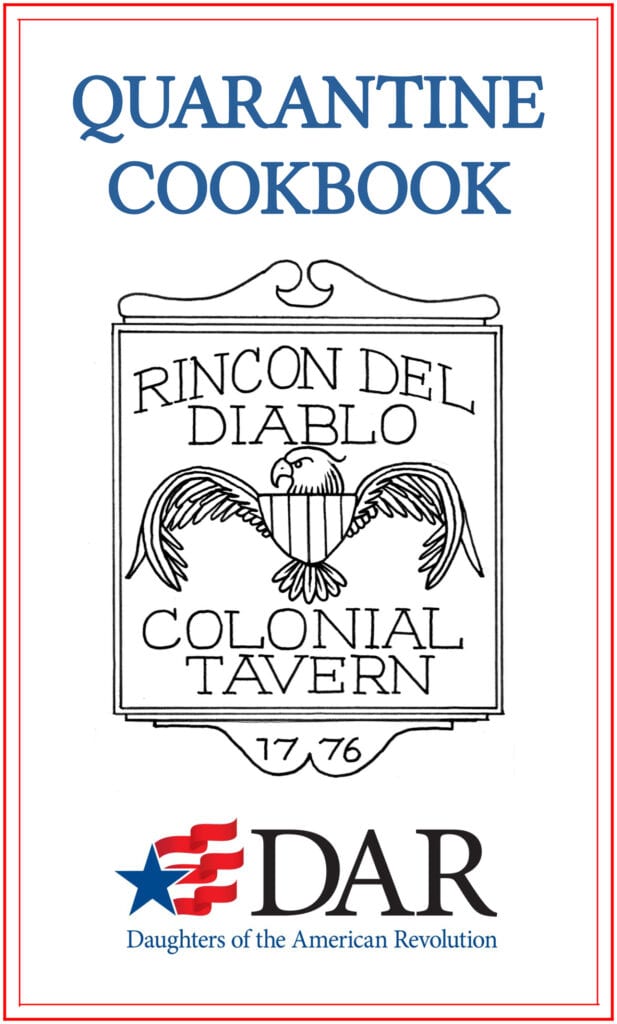 Each section provides a bit of whimsy with names like “Flatten the Curve” Granola and “Lockdown” Chicken Tacos. Anecdotes of this time are also memorialized. From home-schooling to drive-by birthday parties, the cookbook will prompt time capsule memories for many years.

DAR volunteers culled through dozens of favorite recipes submitted by members to replace donations that have fallen off since March. “In order to help to fund our service projects,” said chapter Regent Pam Russell, “we created a fresh, new source of support for our charities.” All proceeds will be directed toward DAR’s projects including Native Women’s Coalition, Honor Flight San Diego, Fisher House, Wreaths Across America, the DAR Schools, and others supporting homeless veterans and victims of domestic abuse. “It has been a busy six weeks, but we are very proud of our results,” Russell added.

Each section is further enhanced by revolutionary era line drawings by DAR member Melissa Shaw Bloch who mixes colonial period dress with settings that evoke a time long-ago when home baking and food preparation were not novel practices. The cookbooks make good gifts for family and friends and can be ordered online at www.quarantinecookbooksd.org/ for $16 with payment via PayPal.

The DAR, founded in 1890, is a non-profit, non-political volunteer women’s service organization dedicated to promoting historic preservation, education, and patriotism. Its members are descended from the patriots who won American independence during the Revolutionary War.

With 185,000 members in about 3,000 chapters worldwide, the DAR is one of the world’s largest and most active service organizations. DAR members are committed to volunteer service, having served more than 12.5 million hours in communities throughout the world during the past three years. To learn more about the work of today’s DAR, visit www.DAR.org or connect with DAR on social media at facebook.com/TodaysDAR, twitter.com/TodaysDAR and youtube.com/TodaysDAR.

(left) The cover of the DAR cookbook.

One response to “Whimsy meets coronavirus in quarantine-themed cookbook”