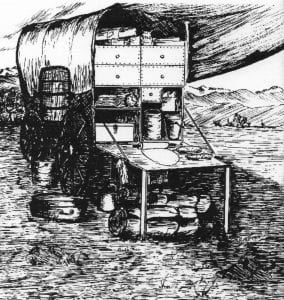 A rendering of a chuckwagon that once was a familiar sight on the roads of Valley Center.

Where is the old Valley Center chuckwagon?  When last seen, about 17 years ago, the once familiar covered wagon was on its way to Jesmond Dene near Escondido.  The Valley Center Historical Society would like to find its present-day owner for an update.

For those whose memory may not recall the vintage wagon, the mobile kitchen played an important role in the festivities of the Valley Center Chuckwagon Club, a social group of about 60 residents that held monthly meetings, social events and outings. The chuckwagon was transported each month by a different member charged with organizing potluck dinners.

Historically, the chuckwagon was a covered wagon used for storage and transportation of food and cooking equipment as part of a wagon train of early settlers.

Gracie Cox, one of the original founders of the local club in 1951, recalled that the wagon came from the high desert community of Apple Valley and was acquired by someone in Jesmond Dene after the club ceased operations about 2000.

At the time of its folding, the Chuckwagon Club claimed to be the oldest organization in Valley Center.  Its original name, the Valley Center Saddle Club, was chartered in 1951 to promote fellowship, hospitality, and good will.  It sponsored a group of young riders called the Wranglers.  The name was changed because the emphasis of the club went from horsemanship to camping and social events including programs with guest speakers, dancing, and parties — and, of course, chuckwagon dinners.

When the Chuckwagon Club disbanded, its records, membership rosters, and event listings were donated to the Valley Center Historical Society which maintains an archive at the History Museum.