When it comes to Mickelson and Tiger, put me in the Phil camp 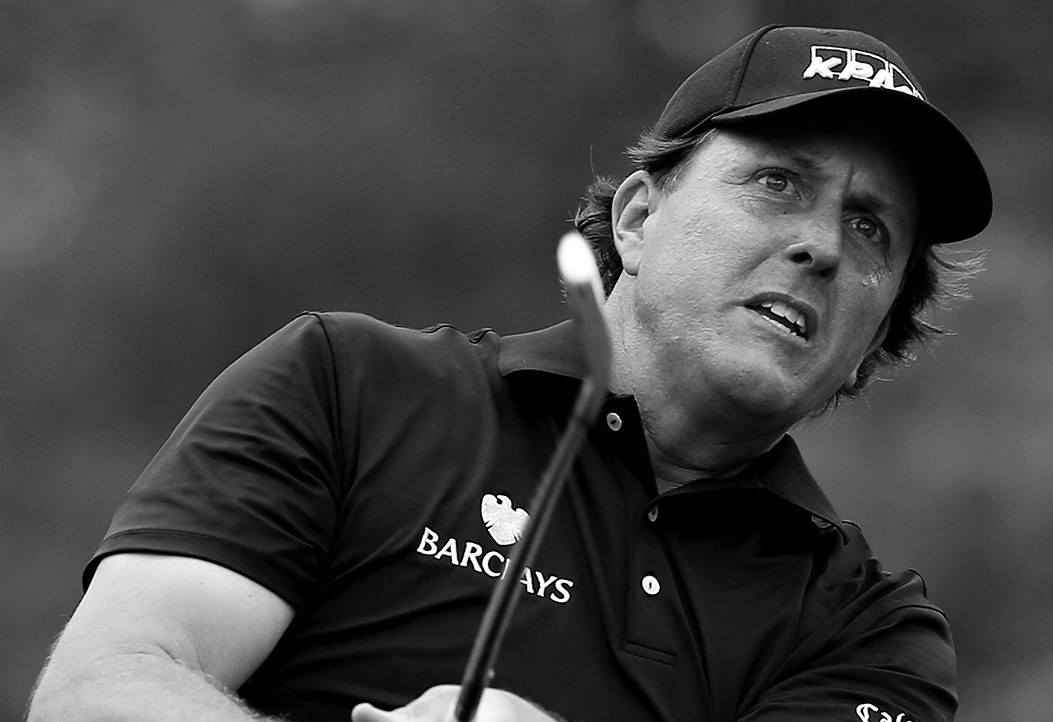 In the author’s opinion, the lefty Mickelson has Woods beat on a number of fronts.

Golfers Phil Mickelson and Tiger Woods have been opponents and ri­vals for twenty years. In truth, for longer than probably each cares to re­member.

Owing to the fact that their person­alities are vastly different and they are both highly competitive souls, it was not much of a surprise that they never became tight or the best of friends. Sure, there was mutual respect ex­pressed between the two, although Mickelson was always the more com­plimentary and respectful.

But underneath it all, there was a perceptible sense of distance and an uncomfortable vibe that hung in the air like a distracting odor. Simply stated, these two weren’t exactly enamored with each other. They were far from buddies who would hang out, share confidences and grab a beer. Rather, a perceptible disconnect abounded and absolutely no chemistry or simpatico existed between them. On some occa­sions, it was actually uncomfortable to watch as they were forced to interact with one another. Oil and water made for a better mix.

And there were also times when thinly-veiled comments and digs were exchanged, but again, it was usually at the instigation of Woods or his sur­rogates, such as his then longtime cad­die Steve Williams. But when feeling wronged or unnecessarily targeted, Phil wasn’t afraid to fire back. When provoked, the articulate Mickelson is perfectly capable of landing a verbal haymaker himself.

With this year’s Masters having just concluded, a tournament that Woods has captured four times while Mick­elson has donned the green jacket thrice, it put me in mind of these two and the interesting dynamic that oper­ates between them and their respec­tive supporters.

My experience has been that there are very few followers or aficionados of the game who are fans of both of these iconic players. You either like or love Tiger and couldn’t care less about Phil or you’re enamored of “Lefty” and have discovered that Woods isn’t exactly your cup of tea. There seems to be little gray area or middle ground. Generally, you’ve joined one of the two camps as far as a rooting interest is concerned. You’re the exception if you haven’t yet taken a side.

One thing that has always intrigued me is that there appears to be more golf fans here in the Greater San Di­ego area that have a preference for Woods over Mickelson. This despite the fact that Phil is a local and home­grown product. I’ve never been able to quite figure that one out unless sheer winning and attaching yourself to someone that at one time seemed destined to become the greatest golfer of all is your ultimate criteria.

Because in just about every other regard, Mickelson has Tiger beaten all to hell. Let’s delve into that assertion more thoroughly.

To begin with, Mickelson is simply a much better guy and a more authen­tic human being. I’ve made note, both firsthand and otherwise, of how each has treated and interacted with fel­low players, galleries, the media, and people in general and there’s really no comparison. In many respects, “Lefty” could be viewed as a man of the peo­ple, very much at ease while mingling with just about anyone. And I’ve per­sonally witnessed on-the-course acts of kindness and humanity by Mick­elson that left an indelible impression on me, more than a few of which were tremendously moving. I’ve never de­tected any overt signs of pretension or phoniness on the part of Phil.

The same cannot be said of Woods, who is a totally different breed of cat. Tiger operates from a divergent and much more self-absorbed mindset. Woods often emits an aura of superior­ity and aloofness that can’t be denied. I’ve seen it up close and personal and it’s real. His apologists try to explain it away as merely concentration and focus on the job at hand but that ex­cuse doesn’t wash. Even when Woods is immersed in one of his patented charges and has the crowd revved up into a frenzy, he isn’t truly with them or of them but merely is feeding off their energy. The masses may not pick up on that realization in the throes of their adoration but it’s there to be de­tected, if one only takes a penetrating look. Woods is like the haughty Shake­spearean actor, undeniably brilliant at times, but one who saturates himself with such vanity that he comes to be­lieve that his audience is privileged and blessed beyond compare just to be able to watch him perform.

And we won’t even pursue to any great extent the scandalous personal escapades of Woods that exposed his public persona as an absolute sham. When you’re living a lie but portray­ing yourself to be something entirely different, you’re not only cynical, you’re just asking for trouble. And sure enough, karma hit Woods smack in the face and made sure that he got his comeuppance. From a personal ac­countability standpoint, Mickelson, by all accounts a genuine and devoted family man, is a veritable saint when measured against the hypocrite that was and still could be Woods.

Next up, there is the issue of on- course decorum and comportment. Again, this is an additional area where Tiger isn’t even in Mickelson’s league. Let’s be frank here. Woods can be a downright jerk with surprising regularity. Whether he’s going potty mouth while dispensing some of his blue language, acting the aggrieved party, be it real or imagined, or just treating his club as if it’s something to be abused, being a gentleman isn’t exactly a Woods strong suit. I’ve been to numerous PGA events and have had the chance to observe scores of play­ers and there’s no doubt that as far as pure behavior is concerned, Tiger re­sides in the low-rent district. Put it this way, if the tour ever gave out a Per­sonal Conduct award, people-in-the- know would double over in laughter if Woods ever won it. At times, he’s made Donald Trump look downright classy by comparison.

Meanwhile, it’s hard to cite ex­amples where Mickelson didn’t carry himself in an upright and dignified manner on the links. Sure, Mickelson can emote, registering frustration, an­guish or even anger about something gone awry but rarely, if ever, has he made a scene over which to be embar­rassed. Sadly, Woods can’t make the same claim. When it comes to being a sportsman, if Phil were to be con­sidered a birdie, Tiger has bogey or worse written all over him.

And when it comes to the excitement quotient, though many would dis­agree with this take, Mickelson again comes out ahead in this writer’s opin­ion. No one can reasonably argue that Woods hasn’t been riveting on many occasions with astounding and super clutch shot-making. But Tiger creates most of his wow factor through execu­tion, not necessarily through approach or philosophy. Woods isn’t so much an artist as he is a sublime technician and technocrat. His actions seem more rehearsed than improvisational. Much of Tiger’s game reflects calculation and cunning.

On the other hand, Mickelson is like the jazz musician looking for any op­portunity to go off on a riff. Supreme­ly creative, spontaneous and even sometimes reckless, Mickelson was the player who rekindled the swash­buckler image originated by the char­ismatic Arnold Palmer and breathed new life into it. More than a few ob­servers have called him foolhardy for some of the risky and daring shots he has undertaken in the past. And some of those dubious judgments have cost him dearly in major events. But that’s the beauty of Mickelson; he’s got to be true to himself and that gener­ally means going for broke, trying to pull off the unexpected and damn the consequences. Few players have had more of a flair for the dramatic than the graduate from University High School. In a showmanship face-off, give me Phil every time.

In the interview room, Mickelson also bests Woods by a unanimous de­cision, if not a knockout. Before the press, Tiger can often be mundane, blah and robotic. He has a tendency to drone on. Woods can appear quite guarded with his antennae fully up, not all that inclined to reveal much of any­thing. Sure, he’ll flash that megawatt smile periodically and occasionally provide some interesting nugget, but on balance, Tiger doesn’t really move the meter during his media sessions.

Conversely, Phil seems much more at home in that environment, his rap­port with the press readily apparent. Mickelson is capable of regaling re­porters with his sense of humor, en­gaging personality and thoughtful and penetrating insights and analysis. It would be a rarity to categorize a Q and A with Phil as being a snoozer or bor­ing. There always seems to be some kinetic energy flowing. With Tiger, you never know with any certitude exactly what you’re going to get.

Let me offer a couple of additional reasons, though perhaps somewhat trivial, why I find myself clearly situat­ed on the Mickelson side of the ledger.

Phil never made it a crusade to wear a particular color like Woods did with his constant donning of red shirts. Woods sold the public on the gimmick that red was the shade that brought out the beast in him, particularly on Sun­days. But for me, it became a tired, old trick that smacked of gamesmanship and nothing more.

And finally, I simply question a guy who totally shies away from ever us­ing his real name. I wouldn’t be sur­prised if a majority of those who read this column are unaware that Eldrick is Woods’s actual moniker. Listen, it’s fine to have a colorful sobriquet and make that your predominant handle but to seemingly bury your actual birth name is curious to me. It makes me wonder why and guess about the motivations behind it.

It will be interesting to see what the upcoming years have in store for these two titans of the game. At 45, Mickelson remains a bona fide threat and is perfectly capable of still going low but can he play with the kind of consistency that will make him a fre­quent contender? Woods, now 40, is due to rejoin the tour sometime in the near future after having to rehab from another procedure on his back. Trying to predict where Tiger goes from here is dicey but even those not enamored of him, including yours truly, know enough to never write him off or un­derestimate his tremendous will.

I fully realize that what’s been writ­ten here probably won’t sway many, if anyone, from changing their view­point on either one of these great champions. You’ve most likely al­ready decided with whom to align yourself if you’ve got any skin in the game. As for me, based on the mul­tiple reasons detailed here and many more too numerous to mention, Phil’s my guy. As for you Tiger fans, you’re more than welcome to him!