What’s in store with the Pats’ encore? 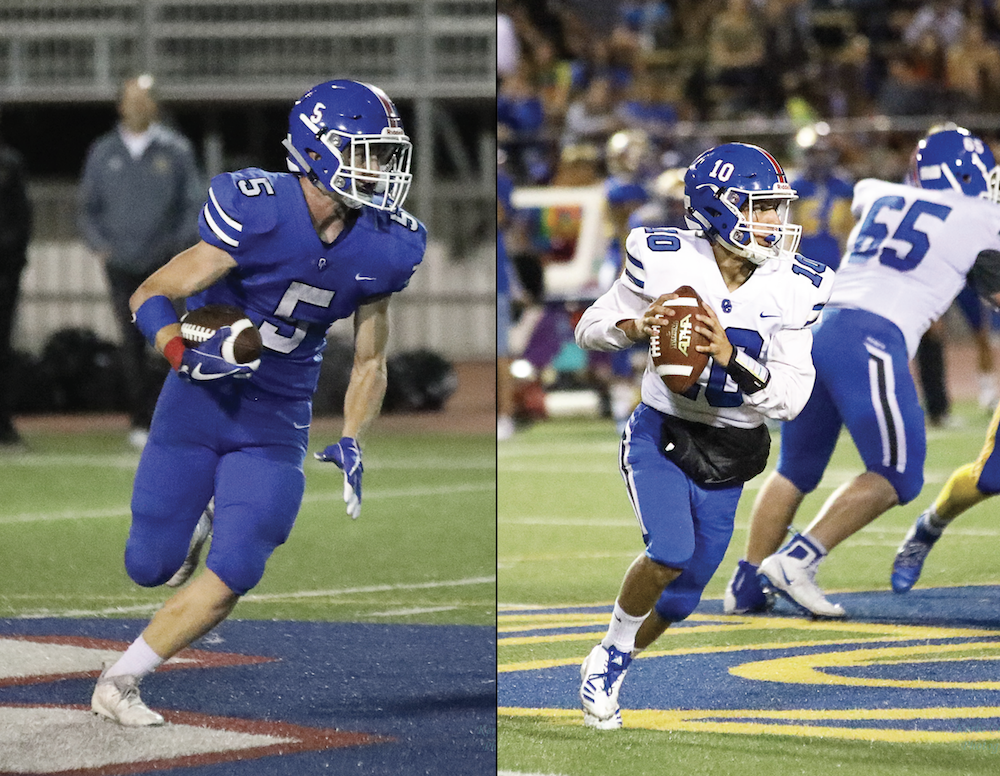 Stellar running back Cael Patterson (left) and junior QB Ethan Villalobos will key what is expected to be a potent Orange Glen offense. Photos by Lenny Kerbs

There’s little doubt that it will take one hell of a lot for the Orange Glen football team to duplicate its massive accomplishments of 2018.

En route to a historic season that saw the Patriots win 10 games, capture a CIF title and advance all the way to a California state championship game, OG established a breathtaking standard. In many ways, it was a Cinderella-like campaign that will never be forgotten.

In the aftermath of such lofty success, the inevitable question then becomes: What can the Pats possibly do for an encore? Well, beginning in two weeks we’re about to find out.

But as OG’s energetic and dynamic head coach Jason Patterson relates, his club comes into the current season with ambitions that haven’t exactly been tamped down. “Our expectations remain very high and that means competing for a league and CIF crown,” he says boldly. “Every year it’s our aim to be at our very best.”

And in order to do that, OG will need to navigate its way through a challenging schedule that includes such teams as San Diego, Escondido, Bishop’s and Santa Fe Christian. Moreover, the Pats find themselves occupying a tougher proving ground having taking a step up in class and moved into the Division IV ranks.

But Patterson hopes that a highly anticipated trip over to Hawaii for a season opener against Waimea will be a catalyst for not only a quick start but will also serve as a springboard for another memorable season. “Not only will it be a fun and exciting experience,” Patterson says, “but it should bring us a lot closer together as a team because we’ll have the chance to learn even more about each other.”

One of the big reasons that Patterson likes his team’s chances to continue the program’s gathering momentum is because he possesses an offense that has the potential to be potent and productive. The Pats will feature a 2-back/shotgun attack that will seek to achieve a 60/40 ratio of run to pass.

In accomplished back Cael Patterson – yes the coach’s son – the Pats return a prolific star who ran for a whopping 2,453 yards and 29 touchdowns in 2018. Fifteen pounds bigger (185) yet noticeably faster because of his training with OG track coaches, Patterson figures to once again put up huge numbers. Endowed with plenty of football sense, durable, able to crash the middle or bounce it to the outside, Patterson is almost impossible to keep under wraps. Uber competitive, he knows how to read his blocks and has made delivering in the clutch an almost commonplace occurrence. As long as Patterson is toting the pigskin, the offense has a great chance to keep motoring right along.

Meanwhile, the quarterback spot will be manned by junior Ethan Villalobos, whose arm strength has noticeably increased; which should allow him to go deep with more frequency. Accurate with his throws, Villalobos can also maneuver out of the pocket and scramble to good effect. A heady player who’s considered a dynamite leader, his teammates feed off his playmaking skills.

The reason that OG expects to go more pass heavy this year than in the past is because of the presence of a pair of skilled wideouts. DJ Harris, a transfer from San Pasqual, is a bona fide athlete blessed with speed, size and great hands. Meanwhile, Jose Riviera looks to parlay his stature and deft route running into becoming a reliable target for Villalobos.

And as far as the offensive line is concerned, though it may not be particularly big, it’s a disciplined unit that knows how to mesh together. In Rudy Baay, the Pats have a powerful left guard who is considered to be a standout player. Tackle and team captain Danny Luna translates his conspicuous work ethic into being a solid performer upfront.  And then there’s center Dominic Hernandez, a big kid whose consistency is undeniable and whose snaps are clean.

Just as he sees the considerable upside of the offense, Patterson also envisions positive results coming from the other side of the ball. Operating out of a 4-3 scheme that features a lot of man coverage, the coach believes the Pats will be “very good on defense.”

Just as C. Patterson is the offensive linchpin for OG, so is linebacker extraordinaire Julien Lesa the undisputed main man for the D. Last year’s Defensive Player of the Year in the Coastal (League), the active Lesa racked up a hefty 131 total tackles, 10 of which went for loss. Quick to shut down the run and savvy on pass coverage, this talented senior owns great instincts and is constantly around the ball. At 6-1 and a legitimate 235 pounds, Lesa is a true physical force who clearly rates among the elite of all North County linebackers.

Though at times it seems as if Lesa can be a one-man wrecking crew, expect him to get ample assistance from fellow ‘backers D’Vante Wheeler and Derrick McCullough, a pair of good athletes and solid tacklers.

Down in the pits, 6’4” defensive end Damien Gainey rates as a willing combatant who brings with him speed, smarts and a decided physicality. Another productive lineman who can get the job done is Mason Boulais, a big specimen (6-4, 235 lbs.) who knows how put his size to good use.

On the back end, the secondary is paced by the gifted Dylan Ewing, a big safety who relishes being a leader and really shows off his stuff on run support and in tight pass coverage. The other safety position belongs to Ben Briceno, a youngster with plenty of potential. On the corners, sophomore Kieran Villalobos has shutdown capabilities while Travis Ehman has the look of a real contributor.

And when it comes to special teams, the Pats should more than hold their own. Kicker Nathan Kells has really advanced and made definite strides since last season. On field goals, Kells looks rock solid from 35 yards out while his punting continues to show marked improvement.

Turning to the return game, those chores will fall to Patterson and Harris, who should complement one another with their differing skill sets.

One other aspect of OG football that makes the Pats such an entertaining team to watch is Patterson’s willingness to gamble and take chances. By the coach’s best recollection, approximately ten times his squad attempted an onside kick in 2018. Add to that the four or five occasions they implemented a fake punt and needless to say, things were unpredictable and never dull. “Hey, you gotta do things that make the game fun,” Patterson says with a smile, “and we’ll do whatever it takes to win. We’re always gonna go down swinging.”

For OG, last season proved to be a magical carpet ride. It’s going to be fascinating to see exactly how far their encore journey will take them.