he will oversee continuing building project 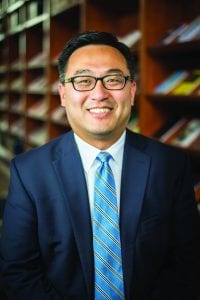 Joel Eunil Kim will take over as president of Westminster Seminary in July.

Ronald W. Prins, chairman of the board of trustees, recently announced the appointment of Joel Eunil Kim as the fourth president of Westminster Seminary California (WSC) to succeed W. Robert Godfrey. Dr. Godfrey is planning to retire by end of July 2017.

The Rev. Joel E. Kim has served Westminster Seminary California as Assistant Professor of New Testament since 2005. As a teaching elder in the Presbyterian Church in America (PCA) he and his family attend New Life PCA in Escondido after serving for a number of years at New Life Fullerton (PCA). He and his wife, Sharon, have two children.

He has served Reformed and Presbyterian congregations for over two decades. As the son of a Christian Reformed Church minister, he was catechized with the Three Forms of Unity from childhood. Born in South Korea, his family moved to Southern California when he was nine years of age, where he would learn English and retain his fluency in speaking the Korean language. He has served as a pastor in several churches in Southern California since his graduation from WSC in 1997, has taught in 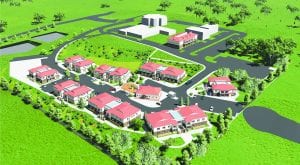 A bird’s eye view of the graduate student housing that Westminster Seminary is now working on. It can easily be seen from Bear Valley Parkway.

several theological schools, has served the global church through agencies like Southeast Asia Partnership, and, among other notable leadership services, he chairs the Candidates and Credentials Committee of the Korean Southwest Presbytery of the PCA.

Mr. Prins said, “The Presidential Search Committee has worked diligently since September 2016 to find the man whom the Lord has prepared for this time of leadership in the life of Westminster Seminary California. Through the careful and prayerful process of considering many candidates, with the Lord’s blessing, we are pleased with this selection of Rev. Kim for the future of WSC.”

According to Dr. Godfrey, “Joel Kim brings many gifts to this new role along with his passion for and experience in pastoral ministry. WSC has become a seminary not only for the west, but for the nation and the world.  We look forward with hope that our new president will continue broadening our impact for the church as the Lord leads him in this office.  I am well-pleased for the faculty’s endorsement.”

That endorsement reads: “The faculty enthusiastically supports the nomination of Professor Joel Kim to be the fourth president of Westminster Seminary California. His love for the church of Christ is manifest, his affection for WSC and his family is exemplary, and he has demonstrated outstanding administrative and teaching gifts. Mr. Kim shows tremendous potential to have a positive impact on our institution at this time as we continue seeking to glorify Christ, promote His Gospel, and serve His Church.” 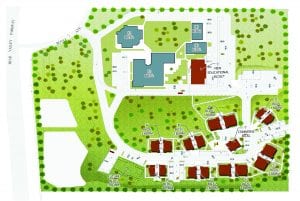 The WSC Board of Trustees is deeply appreciative of Dr. Godfrey’s loyal service and long tenure as president. “We are extremely grateful,” said Mr. Prins, “that Bob will have a continuing role in the life of the seminary as President Emeritus and as a teacher.”

The Westminster Seminary has received foundation approval for three of their nine planned buildings.

Nearly 140 students annually come from 6 continents to study at WSC. They often leave their home countries for two or three years. For a long time the WSC board has envisioned a residential community to house students and their families on campus and to provide a place to call “home” for the many international students. This vision is soon to become a reality.

In 2014, the nine acres of land adjacent to the south of the existing 10-acre campus was purchased and donated to the seminary, doubling the size of the campus and enabling the seminary to embark on the most ambitious initiative since it was founded nearly 40 years ago:  the building of a residential village for graduate level students and their families.

Since the land acquisition, plans for the proposed student housing have been submitted and approved by the City of Escondido, and more than half of the funds for the construction of 64 apartment units has been raised.

Grading work to prepare the land for the buildings began in September 2016.