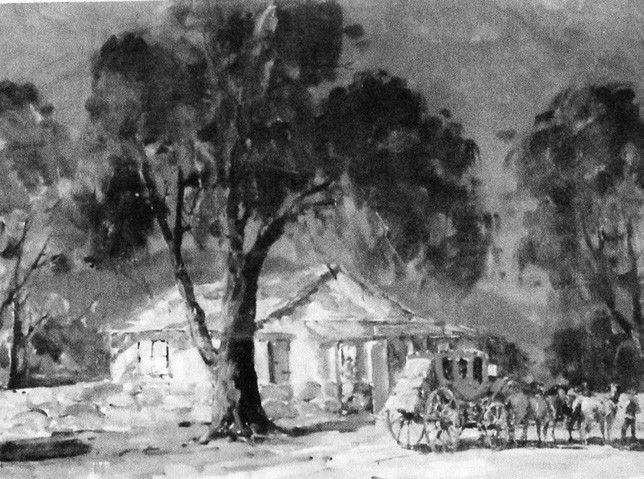 Painting by Marjorie Reed depicts the stagecoach stop at the intersection of VC and Pala Roads, which is occupied by today’s Stagestoop Liquor store.

As its name suggests, the mission of the Valley Center History Museum does not include the exhibition of paintings, watercolors or related works of art.

In recent months, however, art lovers from around the country have been making a pilgrimage to Valley Center to view paintings by an artist many consider one of America’s greatest painters of the Old West.

The artist is Marjorie Reed who gained fame by traveling the length of the legendary Butterfield Overland Stage Line and painting scores of pictures of stagecoaches, stations and landmarks along the route.

Although she painted nearly 200 canvases, most are in private collections and are not accessible to her legion of fans. One of the few venues where the public can see Reed’s work is the Valley Center History Museum, which has seven of her works on exhibit. All were painted in the 1950’s when she visited the area, and all depict local scenes.

Earl Brown, president of the history museum, said he is aware of groups that have come from Chicago, Phoenix, Las Vegas and the Los Angeles area. Although the Valley Center museum has had Reed’s work in its inventory for several years, Brown said the sudden interest apparently was spurred by an Internet site [Marjorie Reed Museum Collections], which added Valley Center to its roster. The list shows only five museums in the country.

Two of the seven paintings at the local History Museum were gifts from the estate of the late Mrs. Maxwell (Alicia) Corey of Pauma Valley. The other five are on permanent loan from the Pauma Valley Community Association, which acquired them following the closure of the Rincon Springs Cafe whose owner purchased the paintings from the artist. Reed had visited the area in 1952 and 1956, camping near the Lazy H while she painted.

One of the more popular paintings at the Valley Center museum depicts a onetime stagecoach stop at the intersection of Valley Center and Pala roads. Others are of the Pala Mission, Palomar Mountain, and various stagecoaches traveling through the region.