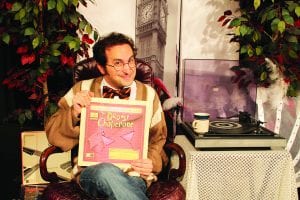 Vincet Pasquill as Man in Chair.

As the overture starts the musical bursts to life in his studio apartment, telling the rambunctious tale of a brazen Broadway starlet giving up her life on the stage to marry her true love, and her producer so desperate to keep his showgirl that he will go to great lengths to stop the nuptials.

With an elaborate cast of over the top characters, including the dashing groom, his best man, two gangsters posing as pastry chefs, the Latin lover, and a drunken chaperone, “The Drowsy Chaperone” boldly addresses a great unspoken desire in everyone’s heart – to be entertained.  With book by Bob Martin and Don McKellar and music and lyrics by Lisa Lambert and Greg Morrison, this 5 time Tony Award-winning musical is being directed and choreographed by the award winning, Ray Limon.

The production plays August 4–27 at the Welk Resort  Theater.  Thursday, Saturday and Sunday at 1 p.m. and Friday and Saturday at 7:30 p.m.