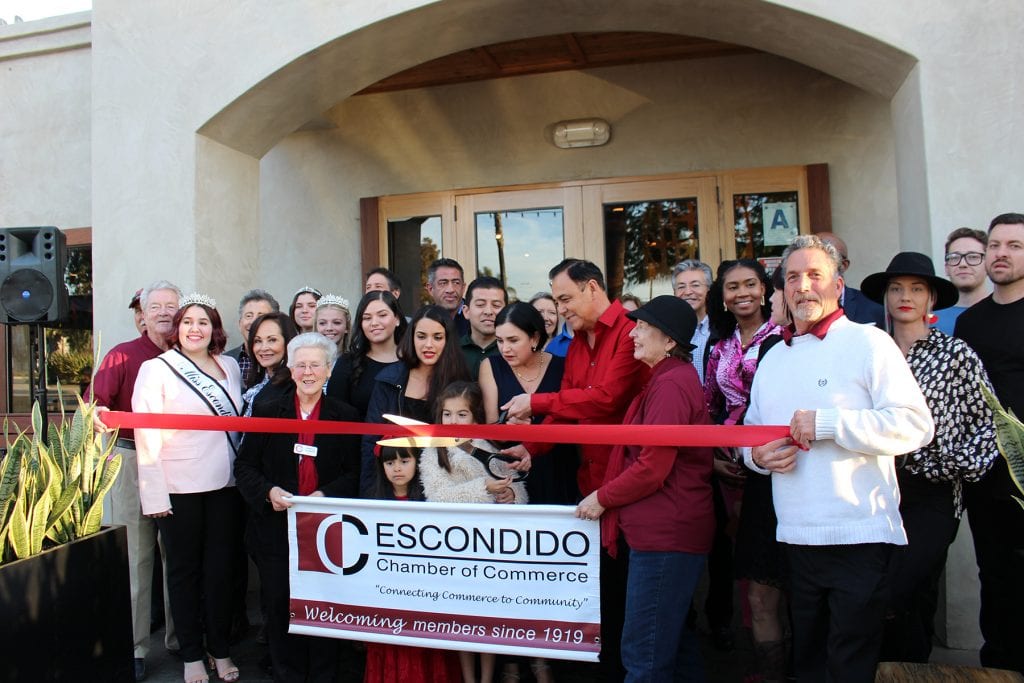 Escondido Chamber members help the Osuna family and Swami’s staff celebrate the re-opening of the popular café at its new location on Grand Avenue in the Mercado.

On Thursday evening, Swami’s Café celebrated the opening of its new location in Escondido, just a few blocks west of the previous downtown site it had called home for over 5 years.

Along with over 40 members of the Escondido Chamber of Commerce in attendance to mark the occasion as part of its monthly Business After 5 Mixer, Swami’s owner Jaime Osuna, surrounded by family and staff, was on hand to cut the ribbon to mark the official opening of this new venue, one he calls “A beautiful new building in the heart of Escondido, a city we want to be in and a part of. We’re excited to be back.”

Added Chamber member Donna Aeling, “I love what they did with the remodel, the indoor/outdoor feel. I love the atmosphere. Also, the location is great on Centre City, now being the gateway with the new arch being installed.” The gateway arch, slated for completion this year, will be visible from the Swami’s patio and span Grand Avenue at the intersection with Centre City Parkway.

Throughout the event, members of the Chamber enjoyed sampling an array of food and cocktails prepared by the Swami’s Café kitchen and bar staff, respectively, as well as the chance to learn more about the company, its history, staff and what makes it so successful.

“Tonight was a huge success,” said Aeling. “The turnout was great, the owners and staff very accommodating and food delicious, as always. I appreciate that Swami’s chose to invest in Escondido as a location for their restaurant. It gives this city and surrounding communities an excellent option to eat for breakfast, lunch and dinner.”

Originating as a small juice bar on Hwy 101 in Encinitas nearly 20 years ago, family owned Swami’s Café has blossomed into one of the most recognizable eateries throughout San Diego County. Now with 11 locations ranging from Point Loma to La Mesa, Del Sur, Coastal North County and the newest in Escondido, although many residents remember when it was here before from 2013-2019.

“Swami’s was the place to go for breakfast,” says Escondidian David Snyder. “I was sad to see it go but am really happy it’s back, now with a great dinner menu, too, and in an even better spot.” 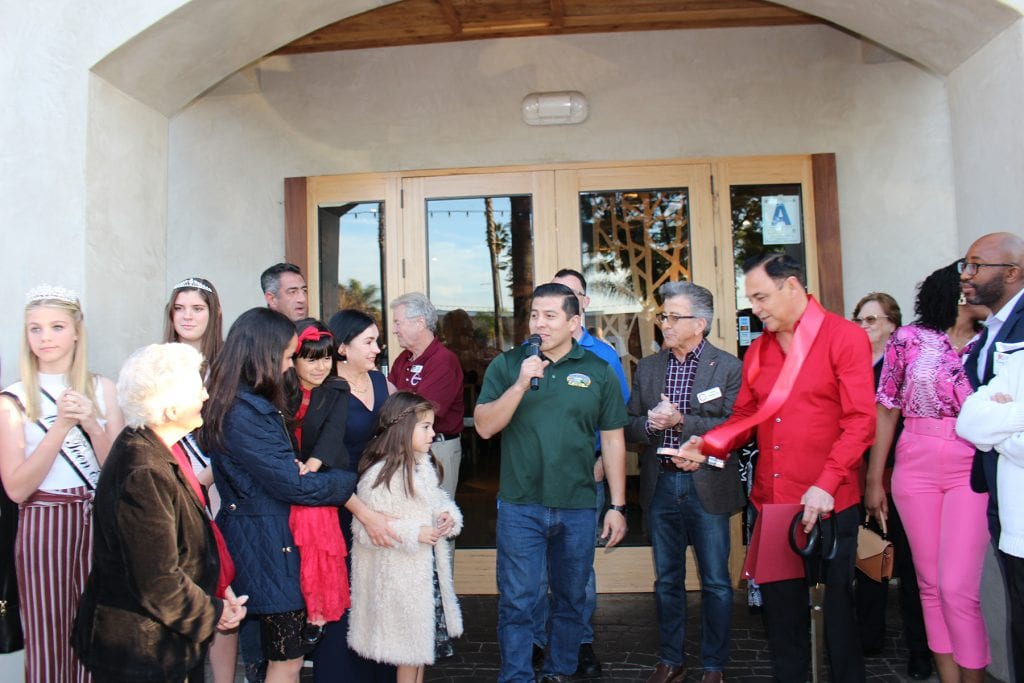 Hulises Contreras, operations manager at Swami’s (holding the microphone) and Escondido Chamber of Commerce CEO James Rowten is to his side.

Why the move? According to General Manager Martin Kleckner, having the opportunity to own a building on Grand Avenue allowed the freedom to be creative with the design, both inside and out, as well as the menu and bar, which he believes to be one of the best features of the venue.

“It’s big and a fun place to watch a game and hang out. We also have a great selection of spirits, which allows us to uniquely pair our cocktails with our breakfast, lunch and dinner menus.” One such cocktail is the PB&J Old-Fashioned, a combination of Peanut Butter Whiskey and Bourbon, among other ingredients, which, according to bartender Menique Tharpe, pairs perfectly with the Chocolate-Chip or Banana Walnut pancakes. For dinner, she recommends, especially for lovers of all things spice, the Spicy Mezcal Mule paired with the Spicy Ahi Poke Bowl. For those less inclined to heat, the Citrus Swami with the Pistachio Crusted Mahi-Mahi may do the trick.

Swami’s Café is located at 503 W. Grand and open every day from 7 a.m.-3 p.m. for breakfast and lunch, featuring a wide variety of pancake/waffle, omelet, salad, sandwich/burger, gluten free and vegan options, as well as an assortment of fresh-squeezed juices and smoothies for every taste.

Dinner is also served each night of the week (except for Sunday) from 4-9 p.m., boasting a unique selection of appetizers, including the Lobster Mac n’ Cheese and Steak Caprese Bruschetta, steak, seafood, salad, sandwich choices and more. Equally as enticing for guests may be Swami’s Happy Hour, offering discounts on select appetizers, beer and wine every night from 4-6:30 p.m.

Asked why she loves working for Swami’s Café’, server Lauren Fluharty says it’s the family atmosphere among the staff, owners and guests. “It’s a genuine privilege to serve Escondido, the familiar faces and new ones who walk through the door every day. I’m excited for what the future may hold for our new location,” she said. Based on the response and support from the community thus far, it appears all of Escondido is as well. 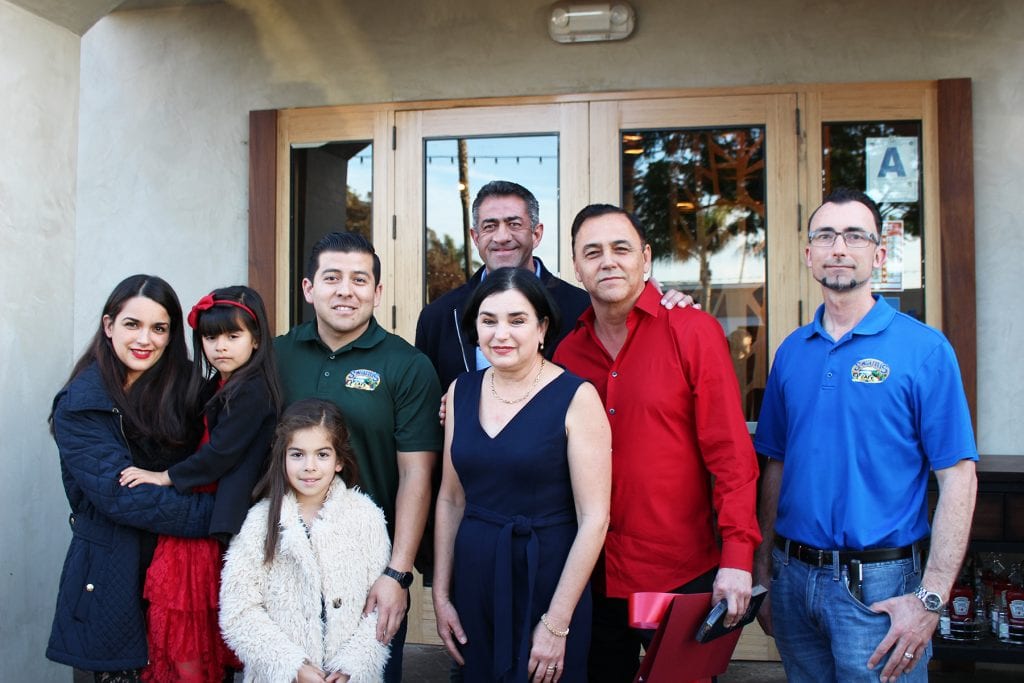 Hulises Contreras, operations manager at Swami’s and his family on the left, then the architect in the back, and Swami’s owner Jaime Osuna & his wife, with General Manager Martin Kleckner.