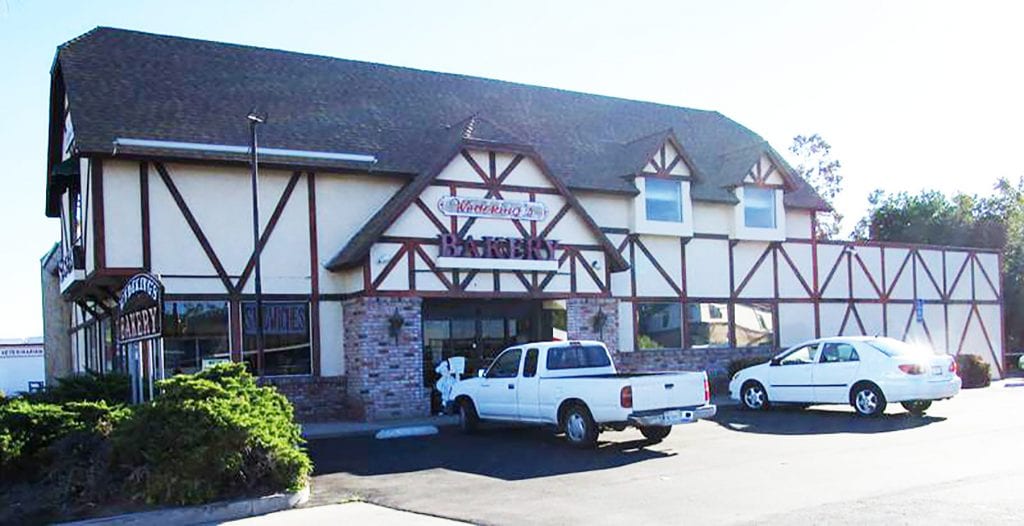 The Gingerbread style building of Wedekings.

Wedekings Bakery and Deli, known as much for its iconic gingerbread style building as for its bakery—and which produced sweets that were considered by many to be the best in Escondido, closed its doors Saturday night.  It was one of the most recognizable buildings along Valley Parkway.

The family was in the baking business a total of 83 years that began when family patriarch Glen Wedeking bought the Home Bakery in Oceanside.  Later his son, Bob, who studied at the American Institute of Baking after working for his father, opened his own bakery in 1958 on Grand Avenue and then in 1974 moved to 815 E. Valley Parkway.

Wedekings was a multigenerational thing for many of the families that patronized it. It was in business for more than 50 years. And yes, Wedeking was the name of the family that operated what for many was “the” bakery in Escondido.

From the very spacious kitchen in the back they produced cakes, cupcakes, cookies, pastries, sandwiches and bread.

Ed Gallo, who has lived in Escondido since the early 1970s, said the bakery was an institution when he first moved into town. “It’s sad to lose something that is a landmark. It was virtually an icon,” said the councilman. “It was really a shame what happened to them on Facebook,” he said.

Business had been declining in recent months, something that apparently wasn’t helped when an online campaign of hate was conducted in social media by people who confused the Escondido Wedekings with another business of the same name in another city.

On the last night of business old customers, many of them old friends, came by for one last time, to pick up their favorite pastry or bread and to wish the family good luck.

3 responses to “Wedekings, a city “landmark” closes for good”