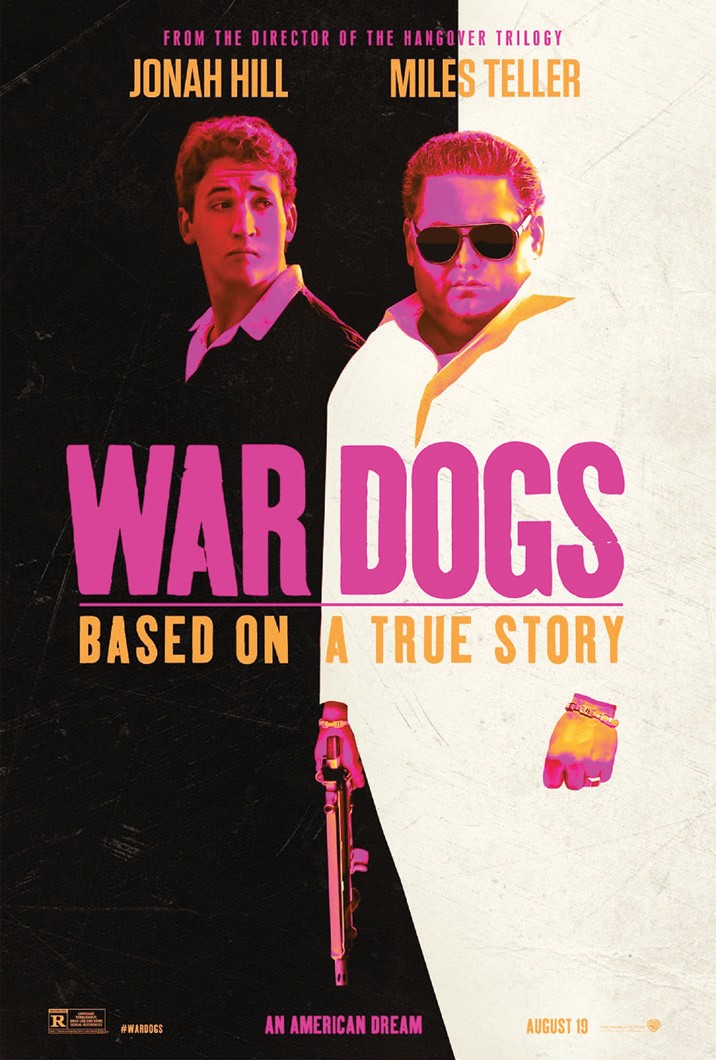 “War Dogs” tells the story of two guys who use underhanded tactics to achieve the American Dream, live large, and destroy themselves. It is based on a real-life incident that has not been brought to screen before, but still seems awfully familiar.

The characters themselves love “Scarface” and compare their story to it at every opportunity. It also has a lot in common with those narration- heavy Scorsese mob movies like “Goodfellas” and “Casino” (the lat­ter features Kevin Pollak, who is also in this movie). Speaking of Scorsese, it’s hard not to compare this film to “The Wolf of Wall Street” due to the subject matter and the fact that both movies star Jonah Hill. I also see a lot of recent Best Picture nominee “The Big Short” in this movie because both were directed by filmmakers known primarily for comedic work (frequent Will Ferrell collaborator Adam McKay did “The Big Short, here it’s “The Hangover’s” Todd Phillips), and both are very funny, but both go into darker, more serious, and more challenging territory than we’re used to seeing.

The film takes place in the mid- 2000’s, when the U.S. government was spending trillions on the wars in Iraq and Afghanistan. David Packouz (Miles Teller) has floundered around from one dead-end job to another, and he just learned he has a baby coming. But then opportunity knocks in the form of his childhood friend Efraim Diveroli (Hill). Efraim runs a small business where he scoops up government contracts to sell things to the U.S. military. Sometimes it’s armor or surveillance equipment, but mostly it’s guns and ammo. David joins and soon the two are making tens of thousands of dollars. Then it’s hundreds of thousands. By the finale, they’re dealing with millions.

Of course, the path to wealth is not without its obstacles. The two twen­ty-somethings don’t have the resourc­es to manufacture the merchandise, which means they have to get it from other people, often taking shortcuts and dealing with shady characters. Sometimes this means putting their business and their lives in the hands of people they’ve never even met, sometimes this means trusting peo­ple they know are bad news, like sus­pected terrorist Henry (Bradley Coo­per). Trade embargoes come up a number of times, forcing them to find ways of circumventing international law. And by “circumventing” I mean “breaking.” But perhaps the biggest obstacle is the volatile personality of Efraim.

David spends the movie in awe of his partner. At first, he’s in awe of what a genius he is. Then he’s in awe of how he always manages to succeed despite how crazy and greedy he is. By the end, even though the two hate each other, he’s still sort of impressed at what a magnificent scumbag he is. And it’s not just David, the movie it­self is in awe of Efraim, making him the scenery-chewing wildman who always dominates the scene. Critics are saying that Hill single-handedly carries the movie, and while Teller as the spottily sympathetic narrator isn’t quite the weak link he’s being made out to be (the best scenes in the mov­ie involve the two characters playing off each other, and it takes both of them to do that), there’s not going to be much debate over which character is more memorable.

“War Dogs” is being marketed as a comedy, and it’s hard to argue with that. Hill and Teller have impec­cable chemistry in their banter, and Hill’s madness is always enthralling. But don’t underestimate this movie as a straight-up crime story. In that regard it’s a movie we’ve seen done before and done better with more well-developed characters. Teller’s blank-canvas narrator seems hollow at times, there isn’t much to the sup­porting cast, and even Hill’s insta­bility gets predictable after a while. Still, this movie holds its own. Like the characters as businessmen, the movie can’t really compete with the big boys that are classics, but it has enough pluck to pull out some no­ticeable minor victories.

“War Dogs” is rated R for lan­guage throughout, drug use and some sexual references. Its running time is 114 minutes.