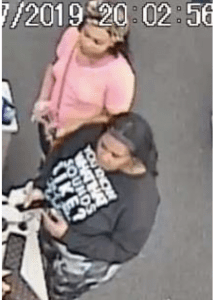 San Diego County Crime Stoppers and investigators from the Vista Sheriff’s Station are asking for the public’s help to identify and locate two unknown female suspects wanted in connection with a burglary that occurred at a gym in the City of Vista.

On January 7, 2019 between 5:00 p.m. and 6:00 p.m., an unknown suspect cut the lock off of a locker at Planet Fitness located at 1980 University Drive. The suspect took credit cards, cash and a checkbook from the locker. A stolen credit card was used to purchase $1,000 worth of Visa gift cards at Walgreens located at 310 Sycamore Avenue.

The suspects were seen driving to Walgreens in silver, 4-door Mercedes with no front license plate.

Suspect #1 is described as a Black female adult with a heavy build. She has long hair and weighs approximately 220 pounds. She was last seen wearing a black, long sleeved shirt and camouflage leggings. 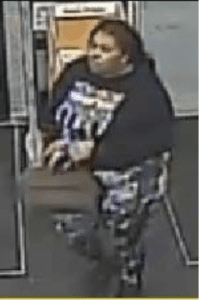 Suspect #2 is described as a Black female adult with a medium build. She has long hair and weighs approximately 140 pounds. She was last seen wearing a pink top with blue and white leggings. 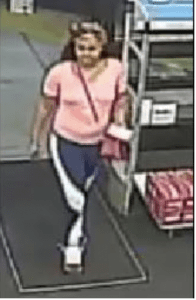 Description of Suspect Vehicle: The suspect vehicle is believed to be a silver, 4-door Mercedes. 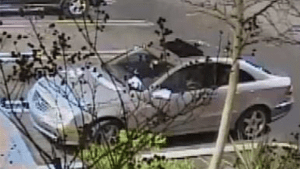 If you recognize the suspects please call the Vista Sheriff’s Station at (760) 940-4551 or the Crime Stoppers anonymous tip line at (888) 580-8477. Crime Stoppers is offering up to a $1,000 reward to anyone with information that leads to an arrest in this case. Information on how to send anonymous emails and mobile app tips can be found on our website www.sdcrimestoppers.org.