Walls that unite: a tour of the city’s iconic murals – pt2 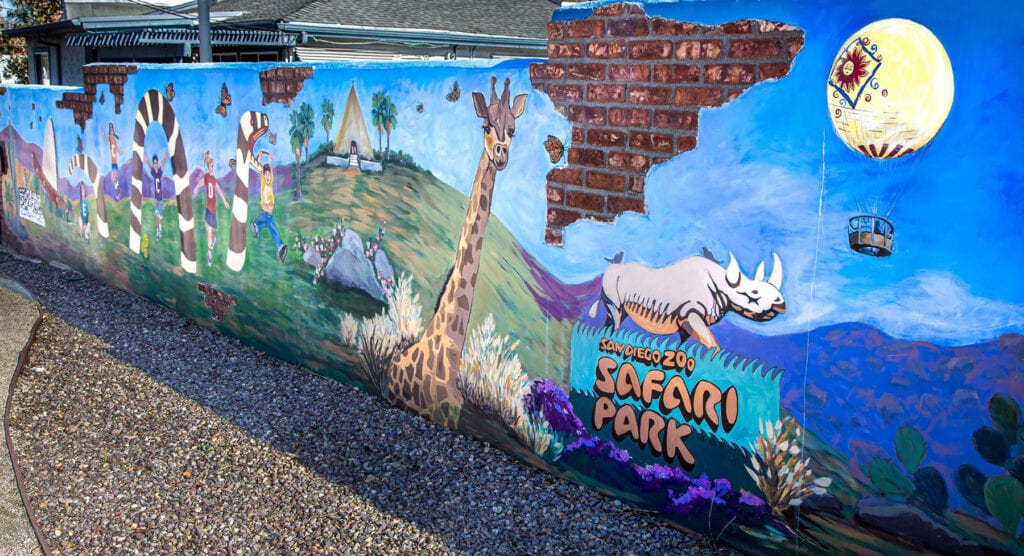 A segment of the ECCDC mural, showing the Safari Park, the Niki de Saint Phalle maze sculpture at Kit Carson Park and the old 50 ft. high Big Teepee that once existed on Teepee Drive until it was destroyed during a wind storm in 1977.

This is the final installment about the more than a dozen walls or murals in Escondido. These are walls, that, instead of dividing, expand, inspire and bring Escondido’s people together.

On the east side of the Escondido Arts Partnership Municipal Gallery at Juniper and Grand is a mural called “Escondido, The Hidden Valley.” It’s a compelling visual story of Escondido’s rich history and cultural identity.

Local artist Daniel Hernandez designed and painted the piece that was installed in 2019.

His was selected from submissions from ten local artists who were asked for designs based on iconic Escondido and its wild spaces.

The final selection was decided by gallery visitors.

According to a gallery flyer, “The location and scope of the mural brings visitors to downtown Escondido and increases public dialogue about the arts that builds connections and instills hope.”

Another mural that honors the history of Escondido is on 9th Avenue & Tulip Street.  At 150 feet long and 6 feet high it’s hard to miss.

Jim Wiese, now retired, was the director of the Escondido Community Child Development Center (ECCDC) while this wall was being constructed and painted.

The noise from passing traffic was so great that something had to be done.  ECCDC applied for a $25,000 grant to build a wall to attenuate the noise. This approved Community Development Block Grant, which is federally funded by the United States Department of Housing and Urban Development (HUD) helped make it happen.

The program provides capital for the city to fund a variety of housing and community/economic development projects that benefit low to moderate income citizens.

Builder Enrique Morales offered to take on the project at a favorable price. Sadly, he passed away just before it was completed. To commemorate his contribution the mural includes a painting of him working on the wall.

After the wall was built, two local artists, Leslie Mayer and Cindy Peters volunteered to paint it. They met with the ECCDC administration and different committees to come up with the design that we see today.

Part of the grant stipulations was that the mural depicts some of the history of Escondido.

The idea was to incorporate the children from ECCDC into the mural learning about the history of Escondido.

Wiese says the result was from a collaborative effort. Debbie Young from Sculpt Nouveau donated the paint. Mayer and Peters volunteered all their time to painting the mural.

“Lesley and Cindy hand painted this all by themselves, totally volunteer. It is amazing that they did this for their community,” said Wiese. “A lot of people put a lot of sweat into making this happen. The artists made it what it is. They spent about five six months and with the planning, at least a year.”

As with other murals, it attracts a lot of attention. Wiese recalls one individual who showed up on site one day with his old Chevrolet that he parked in front of the wall to take pictures for a book he was publishing.

Photographing cars in front of murals is a common occurrence.

A quick glance driving past doesn’t do this expansive painting justice. Wiese believes that people should walk the winding path along the wall to discover the many details applied with heart and dedication. The mural is lighted at night for those who cannot visit during the day.

There are more murals to discover such as the one depicting the Monet-like French countryside on the back of A Delight of France in the alley to the north of Grand or like the wine country cottage windows painted on the side of the building behind Heritage Park and many more.

Murals can be expensive, requiring talent, time and effort.

Zane would love to see more of them going up by a variety of artists. He says that Ramona has over 22 murals. Vista, he says, has one on just about every wall in the downtown core.

According to him it requires the building owner’s permission, the business owner’s desire and financial incentives to make it happen.

To that end the Escondido Public Arts Commission has just created a subcommittee for murals alone.  The goal is to streamline the permit process, hopefully provide some funding and encourage the appearance of more.

A new mural on the side of the city library is already in the planning stages.

Zane is hoping that buildings with murals become landmarks attracting more business for the owners. Greater economic success could be a win-win resulting in more wall paintings.

Heather Moe of Design Moe Kitchen and Bath is a one of those people.

Moe and Suzanne Nicolaisen of the Escondido Art Association, both talented artists, are heading up a committee to plan a long mural on the large building wall across the alley behind The Grand Tea Room and Design Moe Kitchen and Bath. They are interested in involving community painters, illustrators and photographers to participate and make it an ever-changing ongoing display of art.

Nicolaisen was the inspiring force behind all of the unique and colorful K rail barriers placed along Grand Avenue to allow outside dining.

She transformed barricades that customarily divide, limit and separate into a celebration of creativity and unity as people of all ages and all walks of life assembled to color and decorate otherwise drab facades.

Moe and Nicolaisen hope that their project and more community involvement with art and murals will continue to unite, inspire and lift spirits in us all.

A segment of the ECCDC mural depicting Escondido vineyards, Felicita, the Indian maiden after whom the County park is named, and the building of an adobe house.

ECCDC artists signed their work. Two local artists, Leslie Mayer and Cindy Peters volunteered to paint the wall, and consulted with local stakeholders to get ideas on what to depict. 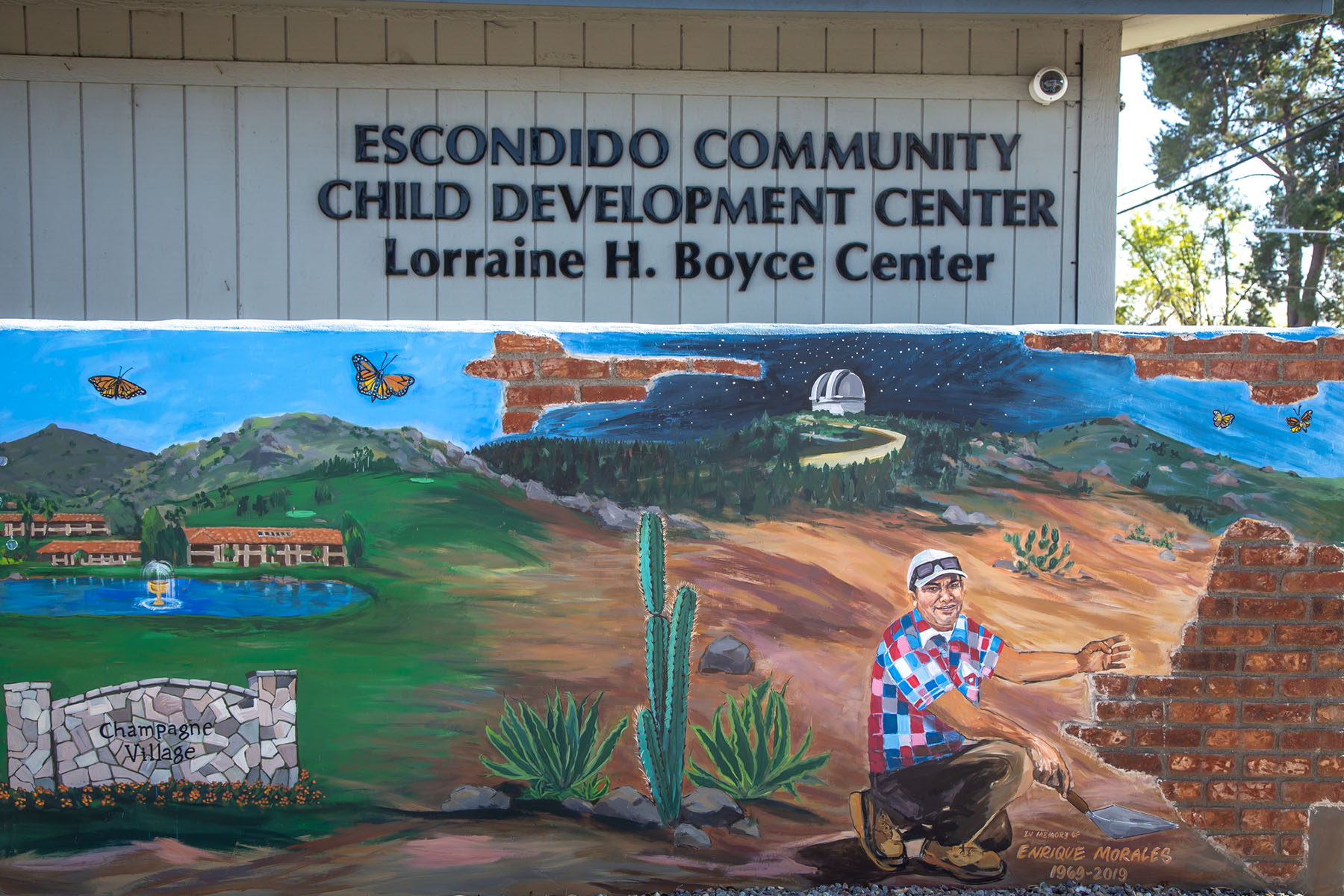 One of the ECCDC mural segments. This one shows the late builder Enrique Morales.

The ECCDC mural on 9th Avenue.

A whimsical flight of books on the back wall of the Book Mark. 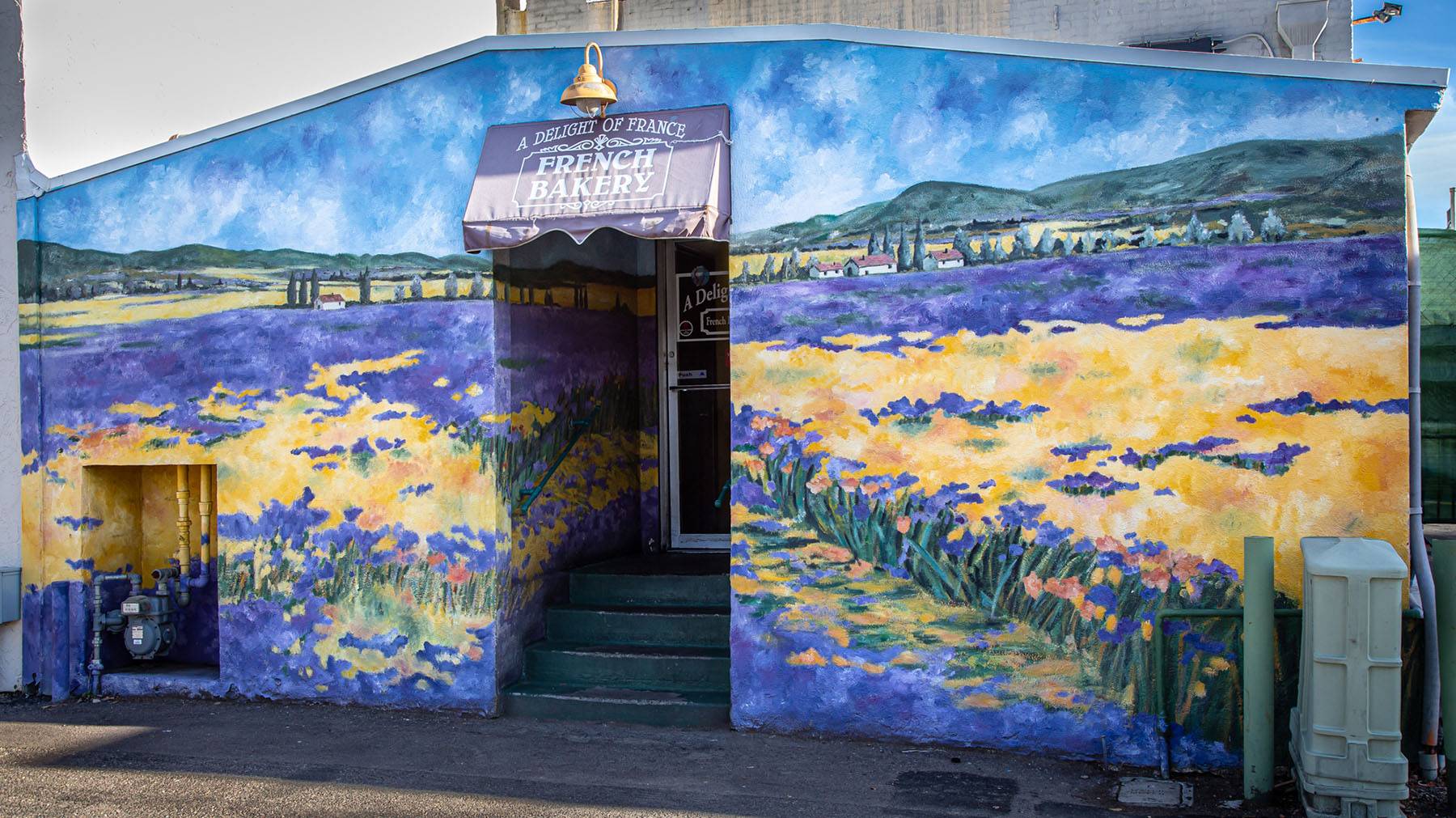 The mural behind A Delight of France French Bakery. 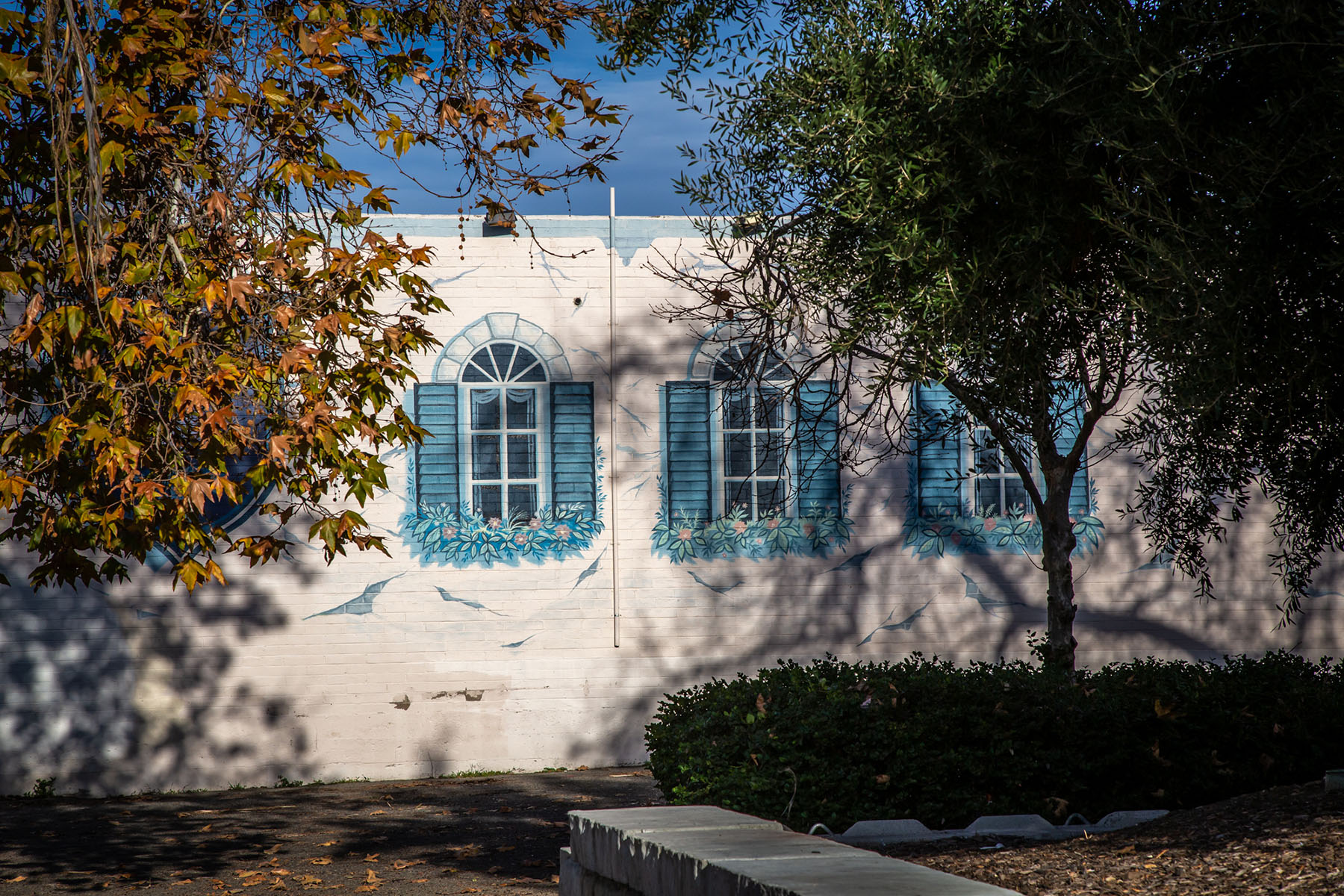 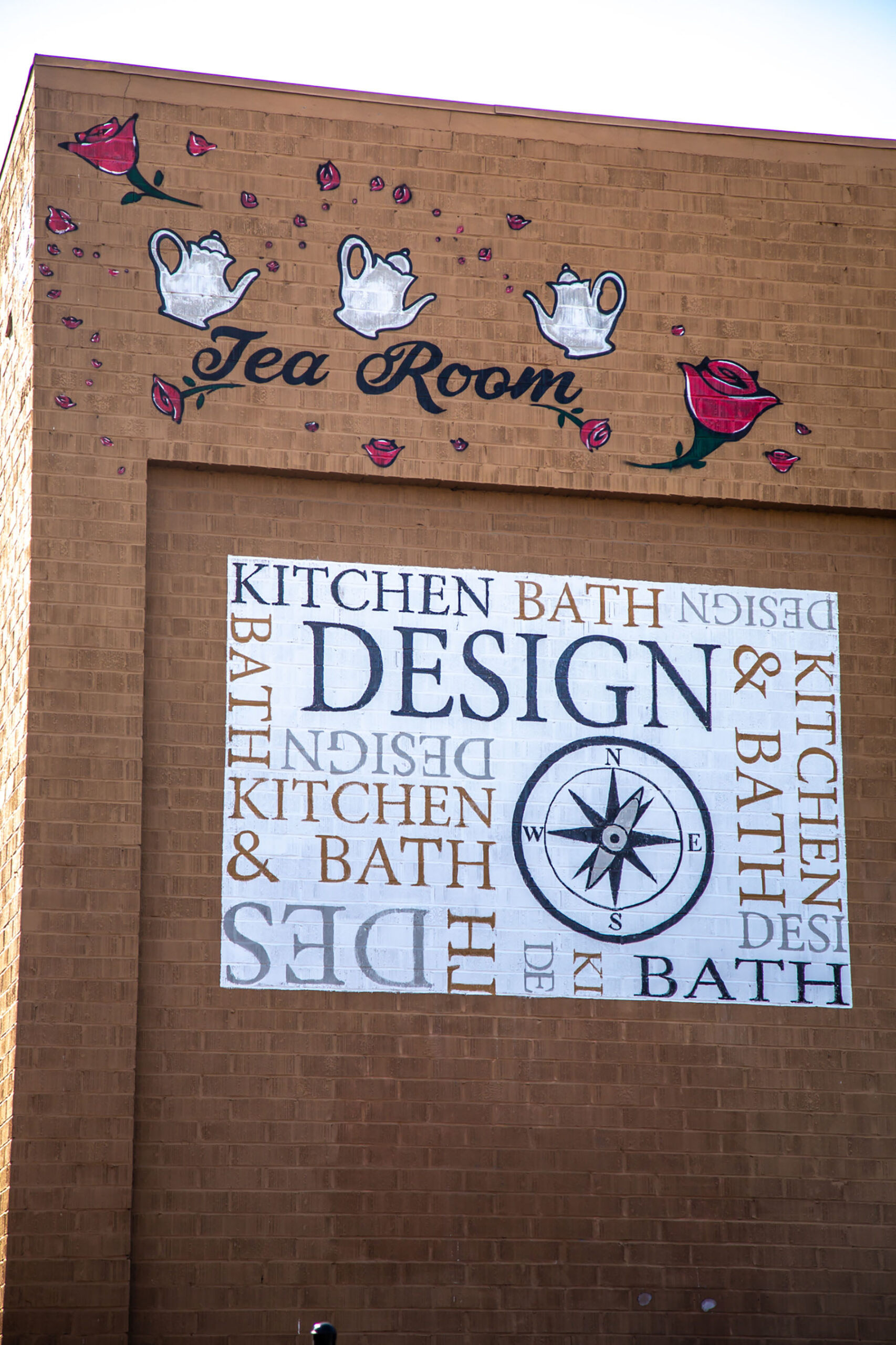