Walking for Vicky: Walk to End Alzheimer’s this week 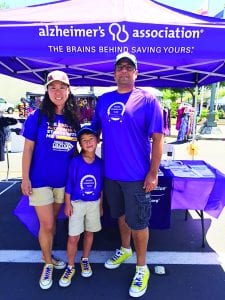 Sue Martins, chairman of the Walk to End Alzheimer’s in Escondido on September 23 at Kit Carson Park, has plenty of motivation for being involved in the annual event and helping to end Alzheimer’s. She was close with her mother-in-law, Vicky, who was diagnosed with Alzheimer’s in 2007 and passed away in 2014. Martins knew her mother-in-law a long time. She met her husband, John, in high school back in New Jersey.

These days, Sue, John and their young son, Anton, are exceptional ambassadors for Alzheimer’s. Wherever they go they don their Walk to End Alzheimer’s t-shirts and purple shoelaces to show off their support, their pride and commitment to finding a cure.

Though the family could get involved in any kind of fundraiser, the Walk to End Alzheimer’s has become their family event. Martins explains why.

“There’s a sense of community that comes with the walk. Our motivators may differ, but we’re all here for the same cause, and I think that’s powerful and inspirational,” she says.

A day doesn’t go by that Sue Martins doesn’t think about why she got involved and stays involved. She started asking about volunteer opportunities with the Alzheimer’s Association as Vicky battled the final stages of the disease, then attended her first Walk to End Alzheimer’s committee meeting two weeks after her passing. From the start she says it was heartbreaking to watch her mother-in-law go from a kind, caring and happy person to someone who was confused and disoriented. She remembers Vicky as a loving wife, mother and friend to everyone around her.

“She volunteered at the elementary schools in Fort Lee, NJ, organized many church functions and was also a den mother,” Martins says. “I wanted to continue her legacy of helping where I can.”

She said that finding out that there is no cure and personally knowing how it impacted not just the person with Alzheimer’s, but family and friends as well, made her want to do something. Vicky’s memory inspires her every day. Her commitment extends to her family. She says that her son, Anton, understands that it’s important to help and to volunteer.

“I think participating in Alzheimer’s events and volunteering is just a part of life for him,” she says. “He was four when he started volunteering with me so I don’t think he knows a life without being involved with the Alzheimer’s Association.”

This will be the family’s fourth walk.  Prior to their move back to San Diego in 2015, Martins participated in the Walk to End Alzheimer’s in Connecticut where Anton was born.  Now, the San Diego area is the family’s permanent home, and because of that, the Escondido Walk to End Alzheimer’s is their event. They love it; they live and breathe it, so that one day all the Vickys of this world will live to see their grandchildren grow up.

And then there is one other source of family pride. John Martins, employer, AMN Healthcare, is a sponsor for the second year in a row.  AMN, which places temporary and permanent medical personnel, well understands the urgency to find a treatment to end Alzheimer’s, which is why they encourage their staff to participate in the Walk.

From sponsorship to teaching their young son the value of volunteering to doing all they can to raise awareness and funds for Alzheimer’s, walking for Vicky has become a family affair in countless ways.

Registration for the September 23 walk begins at 7:30 a.m.