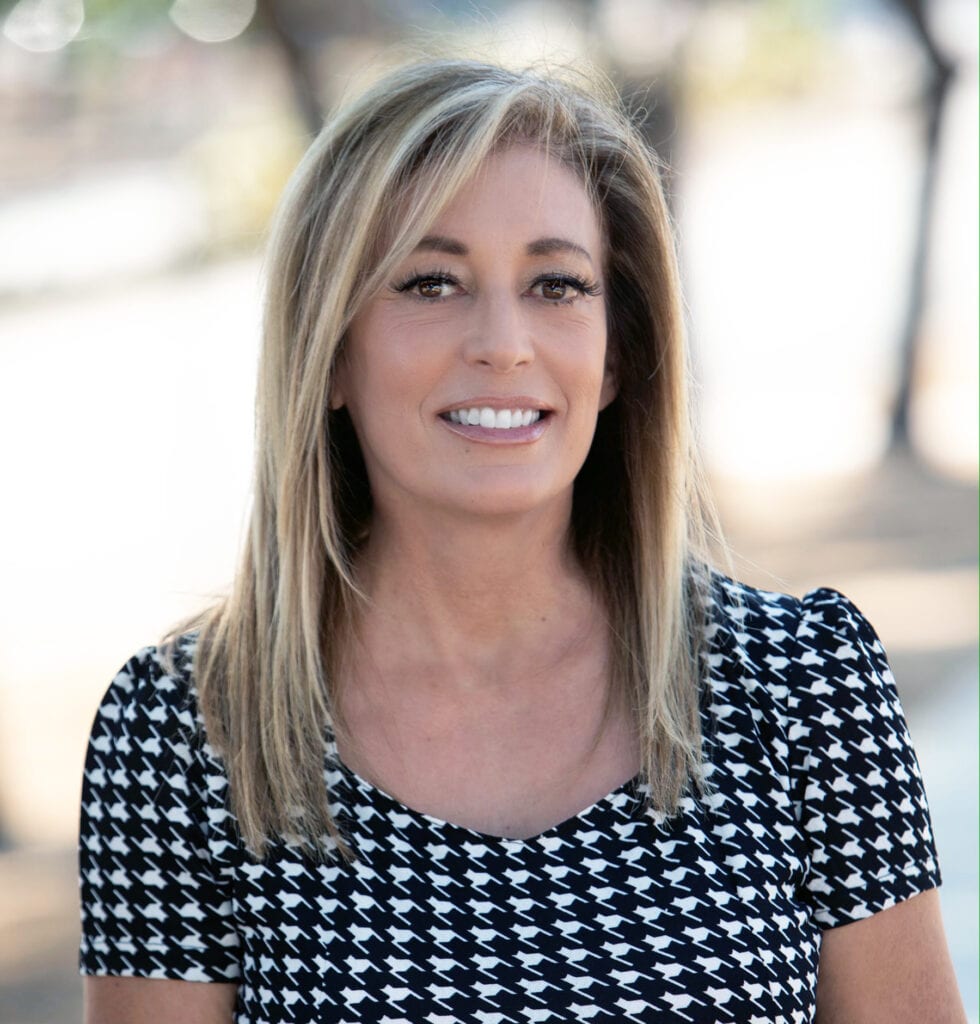 Marie Waldron is running for her fifth term in the California Assembly, representing the 75th District. This is the second to last time she can run, as she would be termed out in 2024. She is the Republican leader of the Assembly.

She describes herself: “I’d say that I’m a neighbor, and a mom and a business owner. I want our voice heard in Sacramento and I want to hear my neighbors’ concerns.”

She is running again, she says, “Because our district needs a voice in Sacramento. We are a little different than many districts. We have some parts that are cities and a vast area that is rural and agricultural. It took a year or two to get Sacramento to recognize that San Diego is not just the city —and that we do have agriculture here. A lot of the focus in Sacramento had been the Central Valley and Northern California. We were able to get San Diego ag on the map.”

“The COVID crisis, bringing back the economy, getting people back to work, making sure it’s done safety and getting kids back to school are the number one thing on peoples’ minds,” she said. We have high unemployment. We have seen some of the dysfunction which includes EDD (Employment Development Department), and the DMV, that had to shut down and allow people to renew their licenses online. We were not ready for a crisis like that.”

Fire and the risk of wildfire is a big issue for this area, she said. “We look back on ten to 20 years of mismanagement of our forests and vegetation,” she said. “We learned our lesson in San Diego, thankfully, and how to deal with the utility companies. SDG&E works hard with their weather centers. It is very impressive. The problem is that it has not been instituted statewide. Other parts of the state could really benefit from what we have done here in San Diego.”

Although COVID-19 and the state’s wildfires have dominated the news, “Mental health and homelessness haven’t gone away,” she says. “In fact, the Covid crisis has exacerbated them. The state is going to have to do a better job to take care of people.”

Homelessness, said Waldron, is “obviously a human issue. We have to address it compassionately and with real solutions. With bold proposals to streamline the homeless population, providing shelter and access to mental health treatment, which is a big part of it.”

“The Public Policy Institute of California said homelessness was the biggest issue on peoples’ minds before COVID,” she said.  “We want to look at some things we CAN do. It’s not just building homes. We need to definitely have more homes available at different levels. The governor has taken action on homelessness. Calling a state of emergency was important to block the frivolous use of CEQA.”

She supports “incentives and training for at-risk youths, giving them more opportunity for jobs training. To break the cycle of poverty so people can get into job training.”

She coauthored with Eduardo Garcia of the 56th District AB 1111, whose goal was to break the cycle of homelessness and crime through career education. “We asked for $25 million and we got it to fund the program,” she said. “This year we are asking for more one time funding. “

The bill, the Removing Barriers to Employment Act, created a competitive grant program to address the needs of individuals who face barriers, who are at risk, often poor and who include former felons. “High school and college is the right age to begin these efforts if we want to prevent the cycle,” said Waldron.

She added, “We also talk about homelessness. We want to make sure we are consolidating services to help streamline and eliminate duplicate regulations, to make sure homeless funds are used where they are supposed to be. We can get more bang for the buck if we make sure the funds are going where they should go.” This includes reentry planning for people coming out of prison. “We don’t want to just release people to the streets—and we see a lot of that,” she said.

She is also concerned about mental health and substance abuse. “I have worked as an advocate to fight substance abuse,” she said. “I served on the San Diego county opioid task force, and currently on the bipartisan Mental Health Caucus and the Assembly Health Committee—where we work all the time on these issues.”

Waldron also co-authored SB 855, the Mental Health Parity Act that strengthened the California Parity Act to require insurers to cover mental health treatment. “Everyone looks at physical health as a issue that must be treated,” she said. “Mental health was never considered the same; even though there are so many correlations between mental and physical health. There is a still a stigma attached to mental illness.” This bill was passed at the end of this last session and requires Governor Gavin Newsom’s signature.

A strong supporter of law and order, she said, “We want to make sure California is the place for opportunity,” she said. “People need to feel safe in their communities and homes. We want to fund law enforcement agencies, and close some of the loopholes in the law.” Such as the fact that vehicle burglary is not treated the same as home burglary. “Vehicle burglary requires proof that the car is locked.” She would also increase penalties for retail or serial theft. “I own a business and any kind of theft is an impact on your business,” she said.

“We have worked with law enforcement on enhanced training interacting with mental patients. Under those propositions people are not going to jail and we can get them the care they need. Prisons are not equipped to handle that. We should put the money toward treatment so we can stop the recidivism cycle,”  she said.

She wants fire departments to have updated technology. “It’s amazing what we have in San Diego,” said Waldron. “Seeing where winds are blowing, they can predict precisely where the fire will spread—alerting people early on.”

She helped co-write AB 14, which provides grants through Cal Fire to local agencies, cities, counties or fire departments for equipment to manage vegetation along county roadways. “In San Diego twenty-five percent of fires are caused by vehicles that pull off the road and by catalytic converters.”

She supported bills to provide money to fire victims. “We negotiated a couple of bills with Governor Brown. They included funding for vegetation management, which is sorely needed, for forest management, and put accountability on utility companies to make sure they were keeping their power poles safe.” That bill, AB 1054 passed with bipartisan support.

Waldron also voted on the settlement with Pacific Gas & Electric which filed for Chapter 11 bankruptcy—which included PG&E’s contribution to a fund to compensate victims of the 2018 Camp Fire.  “The important thing,” she said, “is we are starting to get vegetation management done. But there is so much to be done and the legislation (Senate Bill 901) was just passed two years ago —you can’t do it all at once.”

Although the federal government owns much of the record 3.5 million acres of forests that burned this year, California owns a lot too. “About half of the state is government owned. We have to take a good look in the mirror and make sure we are doing this clearing as well,” she said. “We aren’t out of the woods—so to speak—by any means. We need to be vigilant.”

SB 901 provides $25 million in grants for forest health and wildfire protection. It provides grants to nonprofits, special districts and tribes to keep forests healthy. “We need to get it done,” said Waldron. “We can’t wait.”

What sets her apart from her opponent? Waldron says, “I’m experienced in a lot of areas. As a business owner for twenty-five years I have served in local government—which is an amazing experience. It allows you to focus on issues and solve problems rather than engage in partisan debate. I go to Sacramento and work on solutions to problems.”

Active in this area for more than two decades, she became very experienced in certain areas such as mental health, local government planning, fire protection and agriculture.

Assemblywoman Waldron likes nothing better than seeing constituents come to her office or at a hearing or to get an email that she can read at a committee meeting. “It’s so important. It’s great!” she said. “You get the personal touch on how legislation affects people. To get that first-hand experience whether a patient or a business owner is directly affected. Perhaps a patient trying to get coverage for their care. That is very critical.”