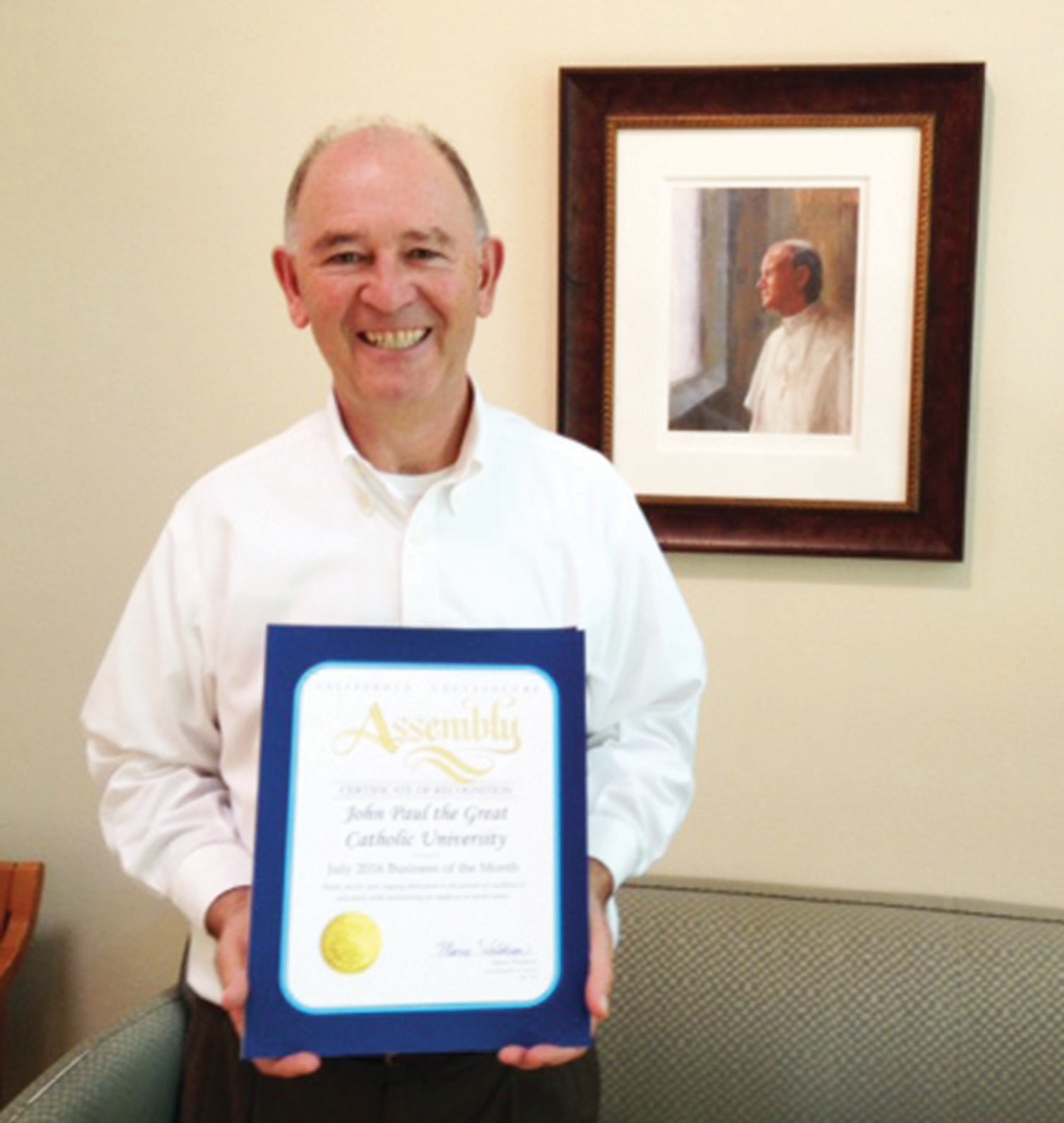 Marie Waldron, of the 75th Assembly District this week named John Paul the Great Catholic University, her July Busi­ness of the Month.

In her award Waldron wrote, “This month I would like to salute John Paul the Great Catholic University, a vision­ary teaching institution located in Down­town Escondido that is having a major impact on the lives of its students as well as on the surrounding community.”

To quote from the university’s website, `The curriculum rigorously prepares stu­dents to challenge a world in which there is an explosion of knowledge but not of understanding, a lack of trust and eth­ics in leadership and the media, a need for new enterprises that demonstrate a moral and ethical purpose, and an obli­gation to recognize the intrinsic value of its workers.’ With a desire to mold stu­dents into future leaders, while living up to the University motto, `Impact Culture for Christ,’ John Paul the Great Catholic University seeks to counter negative in­fluences so prevalent in today’s culture through rigorous education, training and preparation of a core of Biblically grounded graduates who will become our future creators, innovators and en­trepreneurs.”

Offering degrees in communications, media, business and theology, John Paul the Great opened in 2003 and relocated to Escondido in 2013. Under the leader­ship of President Derry Connolly, PhD., the university’s has awarded 180 BS de­grees, 61 MBA degrees and 23 MA de­grees.

The university’s continued growth has also significantly benefited the surrounding community. In fact, many students have created incubator-type companies that are taking off and doing very well. With 42 student apartments located in and near the downtown, an en­rollment of 202 undergraduate and 113 graduate students, 34 faculty members and 24 staff, John Paul the Great Uni­versity has provided a positive economic boost to Escondido’s historic downtown.

Waldron concluded, “Providing an en­riched, spiritually informed educational experience that prepares students to suc­ceed in a rapidly transforming, unforgiv­ing professional world, while retaining the highest standards of business ethics, I am proud to recognize John Paul the Great Catholic University as my Busi­ness of the Month for July, 2016.