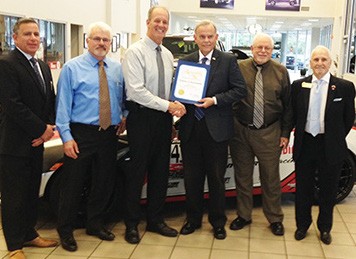 As part of my continuing effort to promote business in North San Diego and southwest Riverside Counties, this month I would like to salute Toyota of Escondido.

A family-owned business since the 1970s, Toyota of Escondido has been a major force driving Escondido’s economy, selling an average of 600 new and pre-owned vehicles each month and providing employment for 287 people.

Aside from the economic impact on our community, principal partners Gary Myers and Scott Whitehead have worked hard to involve Toyota of Escondido in the local community. The company partners with a number of local organizations, including the Escondido Police Athletic League, Escondido School District, Classical Academy and the Salvation Army.

As part of its ongoing program to assist the military, Toyota of Escondido provides $500 rebates and discounted pricing for the military. In addition, $100 is donated to the Marine Corps Scholarship Foundation for every new or pre-owned vehicle purchased or leased by any active duty military customer.

During Military Appreciation Week, February 2 through February 8, this donation will also apply to purchases made by customers who have retired from the military. Toyota of Escondido has also developed a program involving the Navy Marine Corps Relief Society to assist service members when they purchase or lease a new or used car.