Vote50 Forum gets into the weeds with congressional candidates 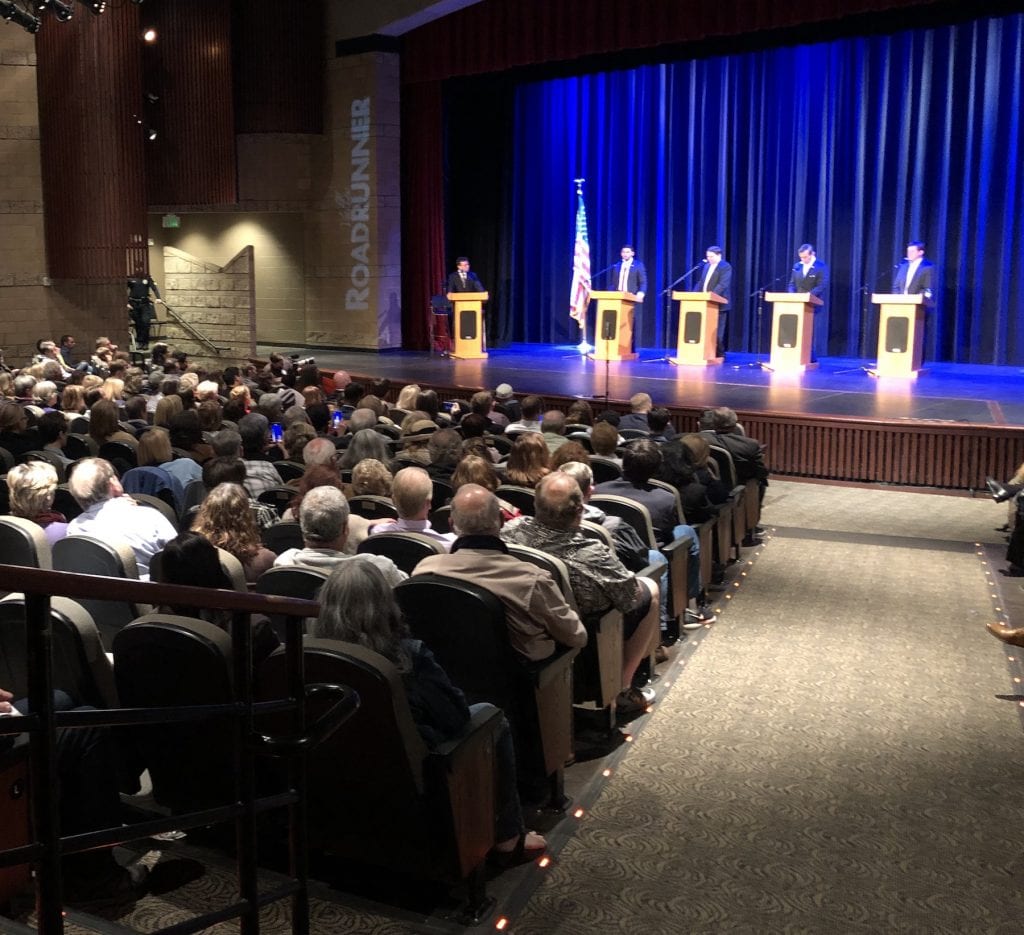 Last week, Vote50 – California’s 50th Congressional District Forum, did something rare. It brought big time politics to North County, which is often the forgotten stepchild when it comes to candidates making an effort to appear here and sell the voters.

Vote50 was a joint effort of the Escondido Times-Advocate/Valley Roadrunner and newly formed Valley Center Business Association (VCBA.) The event took place on the stage of the Maxine Theater at Valley Center High School.

I’m not going to write this as a strictly speaking “news” story because, well, anybody who wants to go to the internet and find the forum and watch it can do so. And I was part of it, so it’s hard to maintain the journalist’s patina of neutrality.

The evening began when a Socialist candidate leaped on stage with a banner and a female bodyguard and began shouting about how unfair it was not to be allowed to participate. As sheriff’s deputies and security closed in to escort him out, his “bodyguard” fell into  combat stances borrowed from grade C Chinese martial arts films until they were finally persuaded to exit.

I won’t mention the candidate’s name since his disruption was intended to gain notoriety.

Candidate Carl DeMaio promised to debate this fellow outside after the forum. He didn’t.

I was one of the moderators, along with William Del Pilar, president of the VCBA. Over the previous weeks he and I and a committee representing most political strains hammered out the topics. The goal was to elicit real policy information from the candidates. In my own case, I also wanted to get under each candidate’s skin and maybe start a fight. That turned out to be like dropping a SweeTart into bottle of Coke. Look out!

Probably the most effective speaker was Campa-Najjar, suggesting “Remember ‘Camping in a Jar’” as a way to remember his name and describing himself as “not a Hunter but a gatherer.” He smoothly and effectively emphasized his working class roots in East County: “While the other candidates tear each other apart, we’re spreading our positive ‘People Over Politics’ ” and calling for “rewarding work – not wealth.” He also repeatedly reminded the audience, “Half of you voted for me” in 2018, when he ran against the former incumbent, Duncan Hunter Jr.

Campa-Najjar’s campaign bused in a sizeable contingent. The energy was with his supporters, who made the most noise during the sometimes contentious back and forth, and who occasionally had to be asked not to heckle or argue with the candidates. My suggestion for some of these folks: pick up a copy of any book by Judith Martin aka Miss Manners. But none of that was on Campa-Najjar, who said he could just as easily part the ocean as control them.

Much of the remaining energy was generated by the fiery back and forth between Carl DeMaio and former (and perhaps future) Congressman Darrell Issa over “lies” both accused the other of making. It was a dogfight.

I could tell these guys really don’t like each other because, as they stood in the wings waiting to go out on stage, both were tense and ramrod straight and looked straight ahead.

This compares to Issa and Campa-Najjar, who later chatted amiably backstage after the event.

During the exchanges, DeMaio wouldn’t let Issa escape  responsibility for ads that (wink wink, nudge nudge) reminded voters of the talk show host’s being a gay man. Issa said that wasn’t intended as gay baiting since everyone knows DeMaio’s orientation. “DeMaio has run as an openly gay Republican many times. There’s not a secret there,” he said.

DeMaio laid into him: “Mister Issa, the 1990s called,” he said.  “They want their campaign tactics back!” He later declared, “Be a man! If you are going to throw a punch, own it!”

Issa fired back that DeMaio had lied repeatedly about how many times he has visited the district he is running for.

Although both DeMaio and Issa do not live in the district, both defended themselves from “carpetbagger” charges, with Issa giving the most extensive explanation: He had quit his original 49th District before the 2018 election to take an appointment from President Trump, only to withdraw from that—at which time he filed for the 50th. He added that the boundaries of his district have moved over time, but that he has always tried to represent it.

The three GOP members linked arms—figuratively—to blame Sacramento for the high cost of living in California, with Issa saying it most memorably: “The fact of the matter is, you can’t fix stupid!”

During the evening, Senator Jones took the calm, even-tempered approach, declining to be drawn into any of the octagon-style verbal brawls between his GOP rivals. In one instance, when asked about climate change, he drew the wrath of some in Campa-Najjar’s cheering section, when he said, “There has always been climate change,” adding that it’s still to be determined who is responsible. “America has been leading the way, it’s time for other gross polluting countries to step up,” he said.

DeMaio agreed, saying he didn’t “want to run the economy in the ditch over a Green New Deal.”

After the debate, when we were chatting about that moment, Jones observed that it was a touchy subject. “That’s because it’s a religious question,” I told him. He nodded vigorously and smiled.

Every person who checked in at the forum received a purple ticket. When they exited, there was four voting stations with boxes they placed their ticket in.  Organizers made sure only one ticket went out per person.

The results of this unofficial “straw poll” was a big win for Campa-Najjar:

To be clear, this was an unscientific poll of those who chose to put their tickets into the ballot boxes provided.

William Del Pilar, president of the VCBA, called the Vote50 forum, “a smash hit, and that’s because of the constituents showing up and the volunteers who put it on. There were over 550 attendees, and across social media, well over 4,500 viewers (latest numbers) have seen the forum online.”

He added, “Most other forums or debates of this nature are done during the day and attended mostly by media and donors. We did this for one reason. To bring the candidates and their message to voters, not donors, and that alone makes it well worth putting on.” 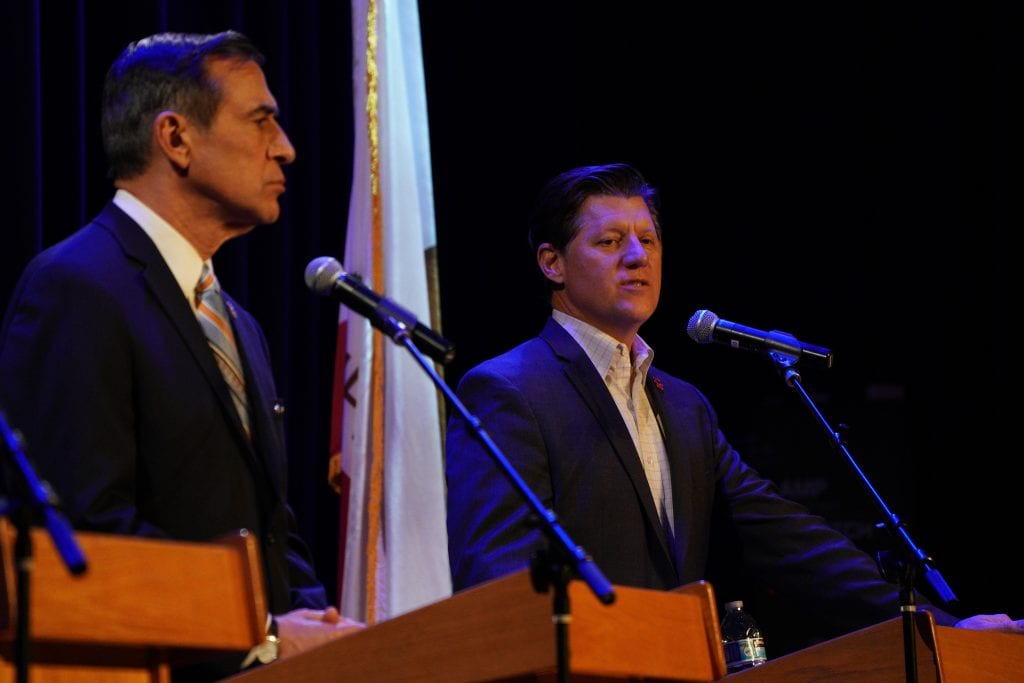 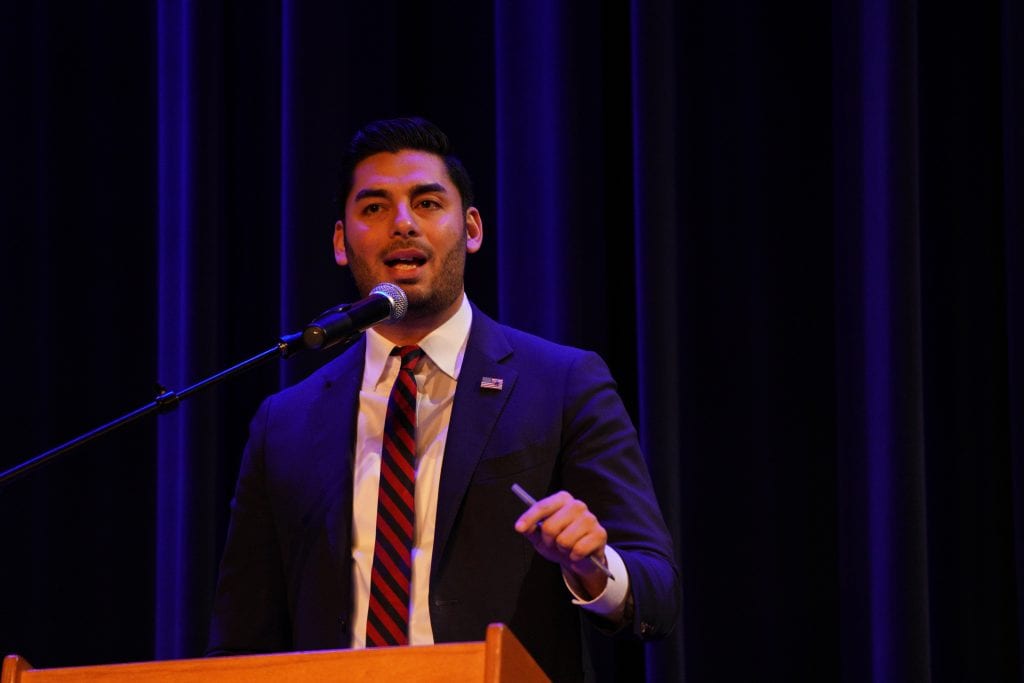 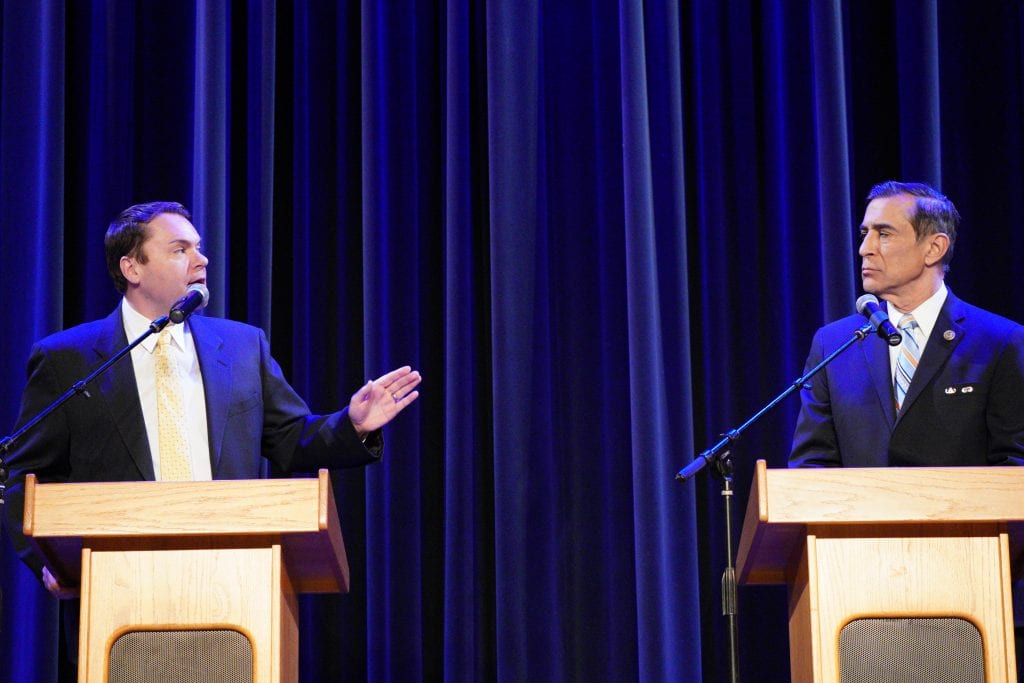 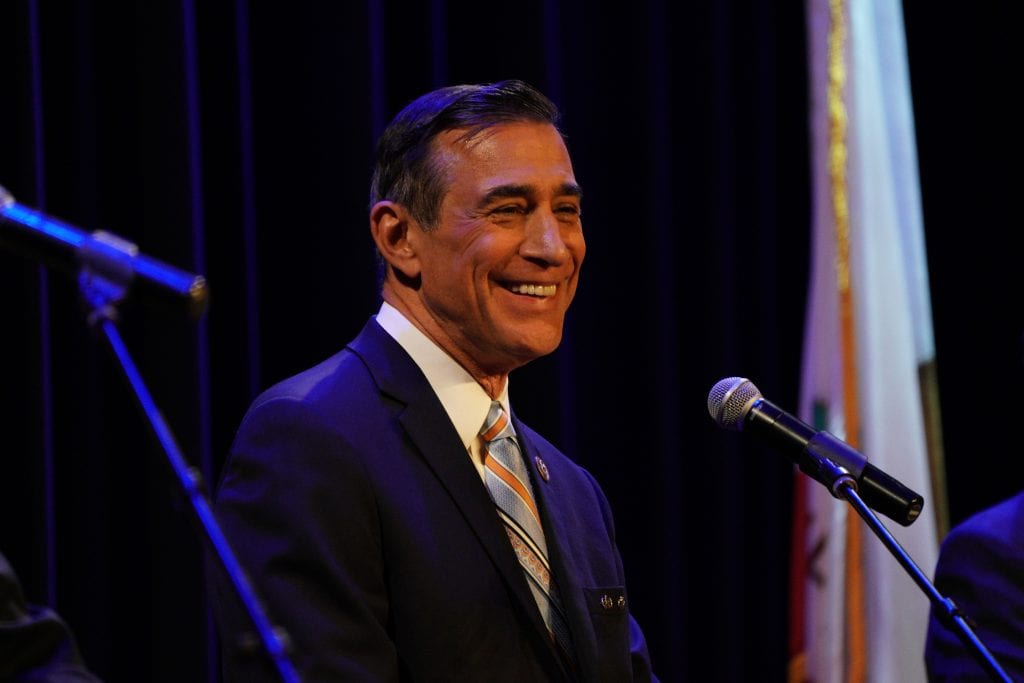 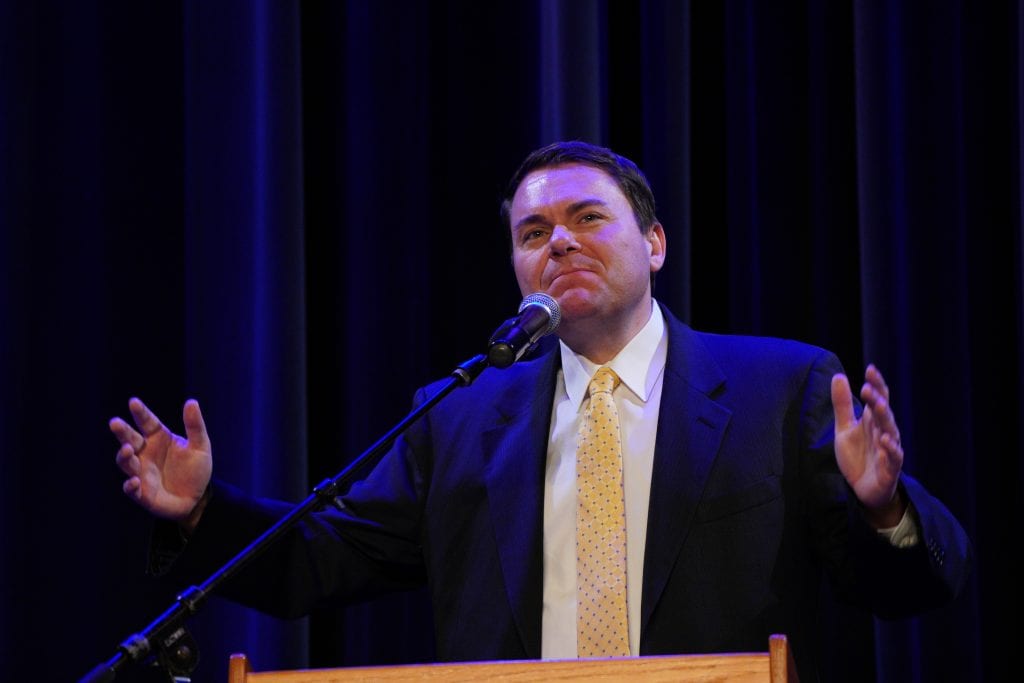 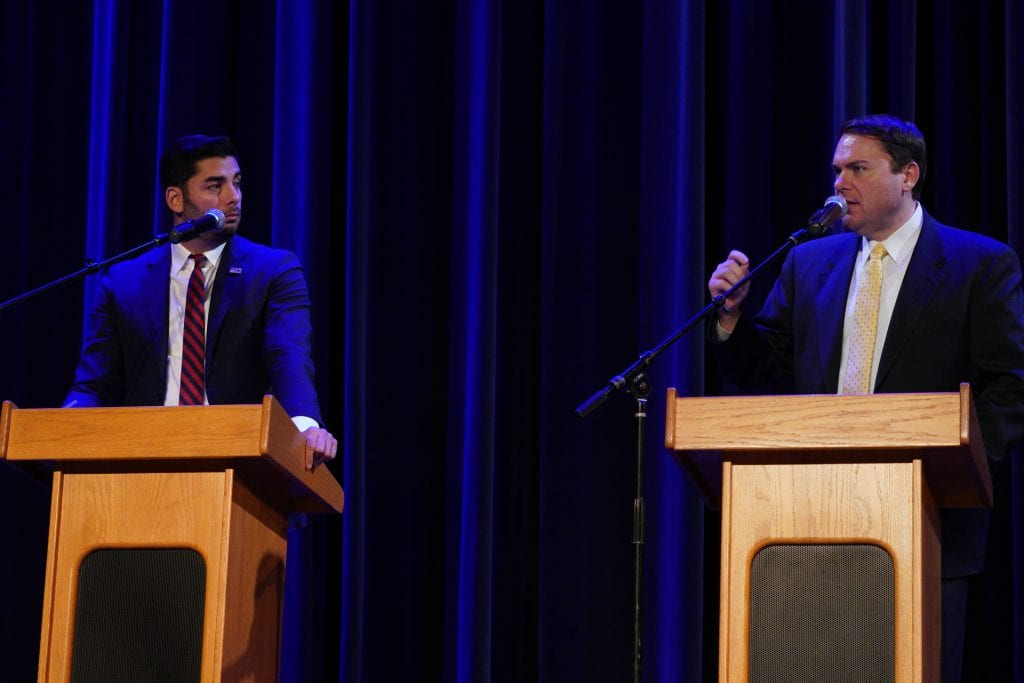