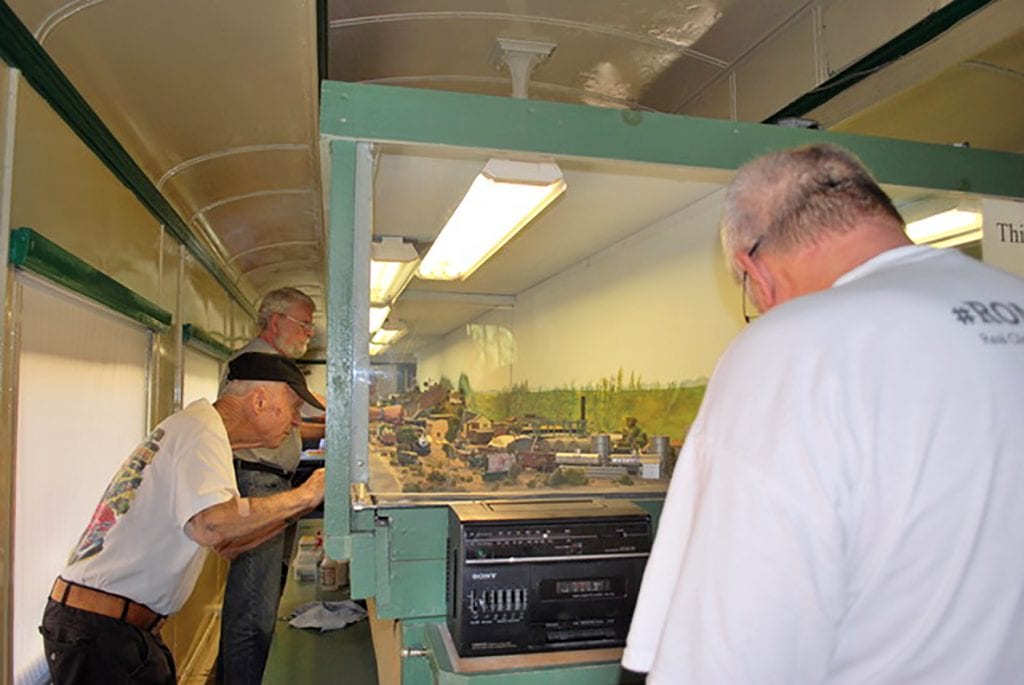 Volunteers at work on the train diorama at the Escondido History Center.

Thanks to the efforts of four volunteers, the model train layout at the Escondido History Center in Grape Day Park is looking much better, more like it did when it was first unveiled on July 4, 1991.

Train enthusiast Bob Danzl had come to the Escondido History Center in September to do research for a new book he’s writing about local railroads, when he visited the old Santa Fe train car located next to the depot in Grape Day Park, part of the History Center Museum complex.

Inside, Danzl enjoyed seeing the detailed 60-foot-long HO train layout, depicting the original route from Escondido to Oceanside. He also noticed the twenty years of dust that had accumulated within the display case and quickly offered his assistance to revitalize the display. On three consecutive Wednesdays, Danzl and three of his friends, Richard Albrecht, Jack Zickgraf, and Dave Henkel, drove to Escondido with their cleaning supplies and equipment to dust and refresh the diorama.

Each train car, each building, and each tiny figure was carefully hand cleaned and replaced while trees and bushes were refreshed with a special spray. The protective plexiglass received appropriate treatment, as well, and is also looking like new.

A spokesman for the Escondido History Center told The Times-Advocate that  “The Center is grateful to the dedicated foursome who brought new life to a tired but very popular exhibit. Thousands of visitors have seen the HO-scale model train layout that represents the passenger and freight line that ran between Oceanside and Escondido until 1945. Included in the diorama are the depots and many other historical structures from Oceanside, Vista, San Marcos, and Escondido, circa 1930.”

It was another group of volunteers and paid employees of Short Line Junction, a model train store in Escondido, who originally built the model more than 20 years ago. Kevin Landers laid out the track and electronics while Pegge Vandervelde built the to-scale buildings throughout the layout and Edna Vick was in charge of painting the background scenery.

The team was allowed to ride the Santa Fe freight train to Oceanside in order to take photos and notes along the way before they started the project with assistance from the historical societies in Oceanside, Vista, and San Marcos—which ensured that the route was accurately depicted. After 500 hours of work and $3,400 invested by the then Escondido Historical Society, the “Grapevine Flyer” was unveiled on July 4, 1991.

The train car that houses the diorama is a 1929 passenger and post office car built for the Atchison, Topeka and Santa Fe Railroad. It had 32 passenger seats and a separate post office at the rear. It was actually in use on the route between Oceanside and Escondido but after it was decommissioned, it was left in a Los Angeles railyard. Through a complex series of events, the train car was moved to Escondido and eventually placed next to the Train Depot in Grape Day Park in 1988 as part of the city’s centennial celebration. It was restored as it is seen today by another team of volunteers led by Dick Althouse.

The train car and depot can be toured Tuesday – Thursday and Saturday from 1 p.m. until 4 p.m. For more information, contact the Escondido History Center at 760-743-8207. 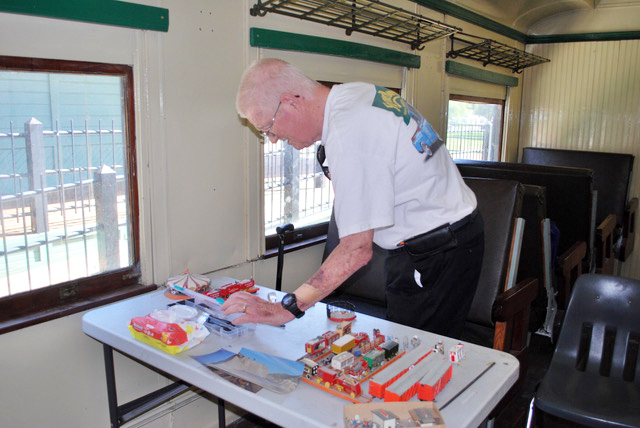 Pieces were removed from the display case and individually cleaned. 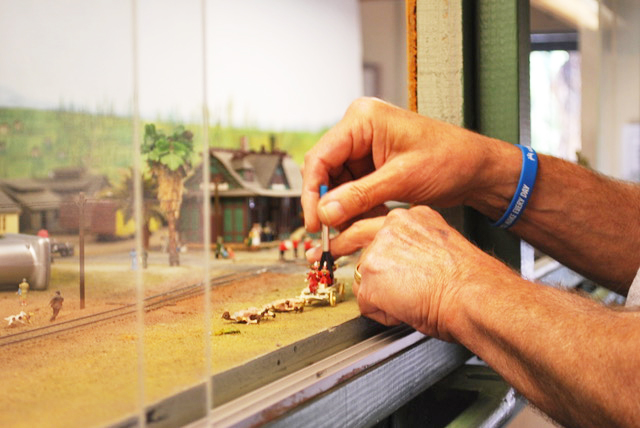 Each train car, each building, and each tiny figure was carefully hand cleaned and replaced while trees and bushes were refreshed with a special spray.