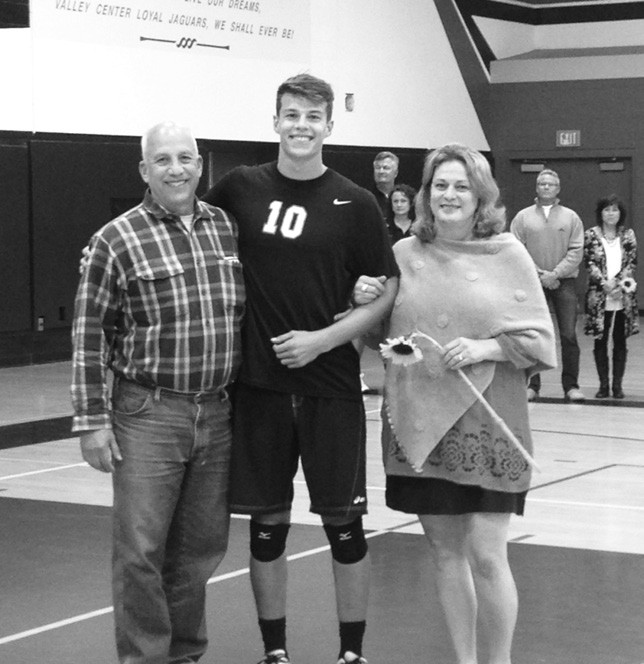 Daniel DeLeon is shown at the Valley Center High School gym prior to a game honoring the senior members of the team. Daniel is flanked by his parents in the photo.

Among the highest compliments that can be paid to an athlete, at any level, is to say that he has a presence about him.

Though that description can convey a variety of things, it generally means that said athlete is consistently clutch, has an air of belief that inspires teammates and exudes a perception that he will always find a way to get the job done. Those with this gift of presence are worth their weight in gold because they create an environment whereby others willingly and confidently follow their lead. Someone with a bona fide presence is an undeniable differencemaker.

Valley Center High’s Daniel DeLeon is just such an athlete. Watching him on the volleyball court is to witness a young man taking control, an individual clearly in his element. One who makes it seem as if circumstances are more at his mercy rather than vice versa. He emits a vibe that almost screams, “Hey, I’ve got this fellas, so what’s to worry?” DeLeon is a rare amalgam of scintillating play underscored by a bedrock of reliability. He is both lightning bolt and security blanket.

To be a presence it helps to look the part and, on that score, DeLeon appears to have been sent by central casting. Armed with a tapered 6-4, 195-pound frame and well proportioned arms and legs, DeLeon reeks of athleticism. Most likely, he has also caused a few female hearts to flutter with his thatch of brown hair, slightly hued skin color and prom king good looks. If there is a modern day incarnation of Jack Armstrong, the All-American Boy, then De- Leon is it.

But beyond the look, there is great substance and gravitas.

Though DeLeon has a well-rounded game and a varied skill set, his calling card is undoubtedly how powerfully he can propel the ball. He can spike with authority, a deadly practitioner of the kill shot. “Yeah,” admits Daniel, “hitting is where I’m at my best. It’s definitely my strong suit.”

Prior to pulverizing the ball, Daniel demonstrates nice footwork and timing as he prepares to ascend skyward. No stranger to knowing how to elevate, De- Leon gets plenty of lift before showing a little hang time in the air. Once he’s reached his apex, he seems to pounce on the white ball that looms in front of him. In a split second, his right arm and hand come crashing down, concussing the ball with frightful velocity. Hardly a scattershot, DeLeon directs his blasts with precision and accuracy. He’s definitely got an idea of where he wants to place his lasers. “Before I swing away, I try to use my vision and take a peek,” DeLeon reveals, “so that I know exactly where to place the ball.”

While acknowledging that DeLeon is a monster when operating from in close, what he can do from distance is also quite remarkable. Rarely do you see a prepster who can deliver a precise spike from the back row and behind the 10-foot line like this uncanny Jaguar. DeLeon’s ability to do damage from downtown leaves heads shaking in admiration.

And though Daniel is the triggerman of the rockets he unleashes, he knows full well he can’t do it alone. He needs a wingman to assist him and this is where setter deluxe Luke Konyn comes in. The chemistry that DeLeon and Konyn share is palpable and it translates into a wondrous simpatico on the court. The artful sets that Konyn delivers to DeLeon leave the heavy hitter in prime position to do his thing. “Daniel and Luke have a really good connection that works extremely well,” informs their coach, Macall Deaver.

As mentioned above, DeLeon is much more than just someone who can bring the hammer down. To keep opponents honest and guard against being overly predictable, DeLeon incorporates some change-of-pace dinks that evidence a feathery touch.

Defensively, he can be a real asset. At the net, given his obvious height and willingness to challenge incoming shots, DeLeon constitutes quite a barrier. Blocking shots is definitely part of his repertoire.

Blessed with quick reactions and soft hands, he’s also quite adept at digs and keeping the ball alive. Along the same lines, he’s accomplished at the art of passing, where his forearms are used to neatly advance the ball to a teammate.

Not to mention the fact that DeLeon is an assertive and effective server who can generate both pace and the desired trajectory. When his totality as a player is taken into account, it’s hard to find an area where DeLeon is lacking.

During the course of a match, it’s easy to see that Daniel is VC’s go-toguy on multiple fronts. In addition to his individual heroics, DeLeon’s interaction with his teammates speaks volumes about his role as both leader and supporter. Whether he’s clasping someone’s hand in an effort to fire them up, offering a reassuring smile to settle them down or calmly discussing strategy to help secure the next point, his impact can be both felt and seen. The presence he evokes is tangible.

With DeLeon spearheading the way, the Jags finished the regular season with a 16-14 overall record, which enabled them to advance to the postseason. And in their first round Division II CIF matchup with Santana, the stellar senior was a standout. During the first six points of the opening set, DeLeon was absolutely dynamic, delivering two tomahawk kill shots, an exquisite dink, a sweet dig and a splendid pass. Using that as a springboard, DeLeon went on to have a boffo performance, raining down a torrent of mighty spikes on the overwhelmed Sultans.

Given his proficiency at volleyball, it hard to fathom that it isn’t the sport closest to his heart. That distinction belongs to football, where DeLeon was a contributor to VC as both a quarterback and a productive wideout. But one thing’s for sure, whether he’s throwing, catching or spiking one, Deleon know what to do with a ball.

Heading off to Tufts University in the fall, DeLeon will make football his priority there and pursue volleyball only on the club level. That realization brings a tinge of sadness to Coach Deaver. “It pains me a bit that he’s not playing in college” she says wistfully. “Not only does he have power but he’s a smart volleyball player who knows how to play the game. Given his demeanor, attitude and obvious athletic ability, he becomes such a commanding presence on the court.”

There’s that word again. Presence. It’s seems as if DeLeon and that rare quality just go together as if they are inexorably linked, as if they are one in