Vincent Memorial a juggernaut in win over White Tigers 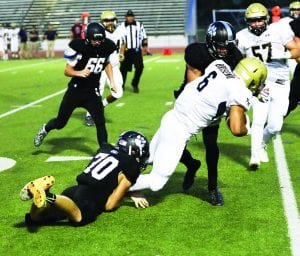 Sometimes in the game of football, it must be honestly acknowledged that a superior and highly efficient team had your number and clearly got the better of you.

Well, that was the reality that confronted the Escondido Charter White Tigers in the aftermath of their 48-0 loss to Vincent Memorial last Saturday night in a game that was held on the field at Orange Glen High.

The prolific visitors from Calexico proved to be virtually unstoppable. Operating out of a dynamic spread offense that attacked the White Tigers from all angles both through the air and on the ground, the Scots impressively scored on eight of their first nine possessions. It was a dizzying offensive display that had the stressed Charter defense constantly under the gun and wondering from where the next strike would emanate.

Slick quarterback Eduardo Valenzuela had a banner night for VM, tossing for four touchdowns and amassing a staggering 389 yards with his arm. And Valenzuela was also the quintessential field general, adroitly handling the option pitch as well as doing some nifty running on his own.

But the senior signal-caller was hardly a one-man band as he got plenty of assistance from his mates on this unseasonably warm night. Wideout Juan Pablo Ruiz (132 receiving yards) bedeviled the EC secondary with his ability to get open deep en route to a couple of long-distance scoring grabs while the physical Javier Briseno (122 rushing yards) showed both power and speed during a pair of paydirt jaunts.

Kicker Adolfo Perez was another Scot who really shined. The owner of a strong and potent leg, this talented junior not only forcefully punched through a pair of a field goals but he also kept the White Tigers pinned deep in their own territory for much of the evening with his prodigious kickoffs, six of which resulted in touchbacks.

So now it’s left for the 0-2 White Tigers to get up, dust themselves off, turn this setback into a learning experience and move on down the road. Despite the one-sided score, Charter did show some flashes of upside and potential. Still early in the season, there’s plenty of time for the crew of Coach Greg Brose to recover, improve and make this a successful year. In other words, there remains so much yet to play for.

Coming into the contest, EC was fully aware that it would be challenged defensively. In capturing their opener 33-15 over Palo Verde Valley, the Scots had showcased their offensive diversity, exhibiting a dangerous blend of their passing and running games.

And that versatility was very much in evidence when the Scots would travel 80 yards with the game’s opening possession. After Briseno set things up by gaining 31 yards on four rushing attempts which included a pair of productive sweeps, Valenzuela looked downfield and drilled an open Ruiz on an in-pattern that resulted in a 29-yard touchdown hookup.  With less than four minutes gone in the contest, the Scots were up 7-0 and were hungrily looking for more. 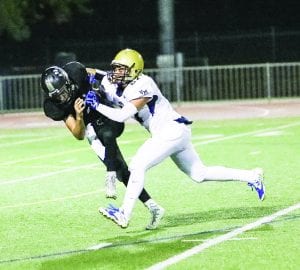 After releasing a pass, Charter quarterback Georgiy Begaliyev takes a hard hit from an onrushing defender.

The White Tigers were able to advance the ball down to the VM 29-yard line on their second series thanks primarily to a nice connection from QB Georgiy Begaliyev to tight end Matt Shams and a well-executed screen that had the diminutive Tristan MacMahon jitterbugging his way for 10 yards. But the drive died when Begaliyev was sacked by blitzing linebacker Adrian Navarro and a subsequent pass, thrown under heavy pressure, fell incomplete.

From that point on, the Scot offense was to go into overdrive and light up the scoreboard. VM would soon negotiate some 63 yards for another score that came early in the second quarter. The key play on this drive was an exquisitely timed screen pass that caught the Charter defense in a full-out blitz. With nothing but open space in front of him, Andres Bryan gladly accepted Valenzuela’s toss and hustled downfield for a huge 28-yard pickup. Five plays later, Briseno took an option pitch and bulled his way past three Charter defenders at the goal line. Now the count read 14-0 and momentum was definitely residing with the Scots.

After its next possession resulted in a Perez field goal, VM was to quickly tack on six more points. Needing only three plays to strike gold, the capper came when wide receiver Emilio Abizaid sped past the Charter secondary and latched onto a beautifully thrown aerial that caught him perfectly in stride. Some 62 yards later, he was cruising into the end zone all by his lonesome.

Perez continued to keep the scoring parade going with his second authoritative field goal and then, with little time left in the half, the Scots cranked it up again. From 35 yards out, the elusive Bryan hauled in a pass, made a terrific cut and then separated himself from the Charter defenders before crossing the scoring stripe. Trailing 34-0 at the half, the White Tigers were looking up at a most daunting deficit.

In what was a somewhat anticlimactic final 24 minutes, the Scots tallied twice more. The first touchdown came on yet another tight spiral unleashed by Valenzuela. Waiting for Ruiz to put his afterburners to good use and get loose deep, Valenzuela reared back and flung an arching bomb that dropped right into his receiver’s waiting arms, good for a picturesque 56-yard payoff.

And then Briseno added an exclamation mark to his productive evening when he took a handoff, veered to the outside and culminated this 24-yard scoring run with a fully-extended dive just inside the pylon.

Though much of the credit for VM’s dominance justifiably went to its offense, the Scot defense was also outstanding in pitching the shutout. Completely shutting down the run, controlling matters at the line of scrimmage and generating plenty of pressure on Begaliyev, the Scots never allowed the White Tigers to establish a rhythm when they possessed the ball. EC couldn’t penetrate any further than it’s advance that ended just inside the enemy 30.

Without a doubt, this was a difficult night for the hosts but there were rays of promise to be found. When given time, Begaliyev delivered more than a few solid throws and gave evidence of his legitimate arm strength when unloading on some out patterns.

Two passing targets who certainly made their presence felt were wide receiver Shane L’Etoile and the aforementioned Shams, a pair of sophomores seemingly destined for bright futures. The 5-foot-9 L’Etoile displayed some real hops with his ability to leap high and take contested balls away from opposing DBs. Meanwhile, Shams did a fine job of finding holes in the coverage, presenting himself and then getting some crucial yards after the catch. 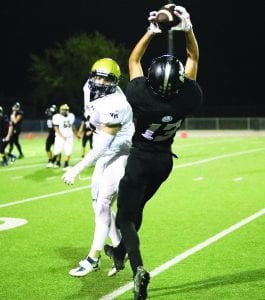 And while he was basically neutralized when taking handoffs, MacMahon nonetheless proved to be quite effective when he got the ball in space such as on screens. Moreover, the senior running back clearly provided EC’s most exciting sequence when he raced over to corral a kickoff right at the goal line, put on a genuine burst of speed and hightailed it all the way out to midfield before a thunderous hit brought him down.

On the other side of scrimmage, there were also performances upon which to build. Defensive end Aaron Bolas was in on plenty of tackles and battled hard all night long.  Linebackers Collin Shore and J.R Lucas were active and made some noteworthy stops. Plus, the versatile L’Etoile was a factor at the free safety spot with his multiple pass breakups, admirable cover skills and nice open-field tackling.

One other EC player worthy of praise was punter Javier Vargas. Utilzing a short approach to his kicks, Vargas did some mighty effective work. Not only were most of his punts strategically placed but they also generated plenty of roll. As a result, a majority of his boots went unreturned.

With another home date approaching this Friday versus San Ysidro, the White Tigers will get the chance to see if they can turn the experience of playing a juggernaut like Vincent Memorial into something positive. There can be a lot to be gleaned from taking on a team like the Scots if properly applied. It will be interesting to see if the White Tigers can translate a tough loss into some valuable lessons that will benefit them down the road.