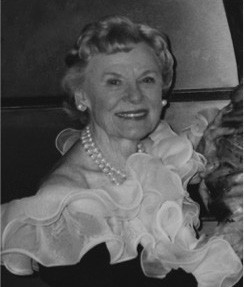 We lost our beautiful mother and “Nana,” Victoria Payne Harper, on September 10, 2015.

She lived 94 wonderful years, with grace, style, kindness and generosity.

“Tory” was born in Amsterdam, NY, the only child of her devoted par­ents, Edwin Van Rensselaer and Flor­ence Harrison Payne.

Her early career was as a model in New York, before meeting Talbot Ed­ward “Ted” Harper and marrying him in 1941 in Stonington, CT.

While Ted was Assistant Naval At­taché in London from 1951-1954 they had the honor of attending Queen Elizabeth II’s coronation and her first diplomatic reception at Buckingham Palace.

When Ted retired as a Rear Admi­ral after 20 years in the navy they re­mained in Vienna, VA and then moved to Arlington VA.

They spent their summers and later retired in Shelter Harbor, RI, enjoy­ing that idyllic ocean-side commu­nity for many years. While living in Virginia, Tory started her 22 years as a travel agent, including 10 years when she and Ted ran their own travel agency, Stonington Travel Service, in Stonington, CT.

Fifteen years after Ted died in 1989, Tory met and fell in love with Jim Flood at Redwood Terrace, where she lived out her remaining years.

Jim and Tory were very happy to­gether, spending time with friends both in Escondido and in Shelter Har­bor, as well as traveling to Ireland and throughout the U.S.

Throughout her life Tory added a creative flair to all she did. Whether it was Sunfish regattas or festive dinner parties in Shelter Harbor, the cotil­lions she and Ted ran in Virginia, or the fashion shows she led at Redwood Terrace.

We will miss you, Mom, Tory, Nana. Thank you for being such a wonderful part of our lives.

For those considering memorial gifts, the family suggests The Red­wood Terrace Employee Education Fund or The American Red Cross.