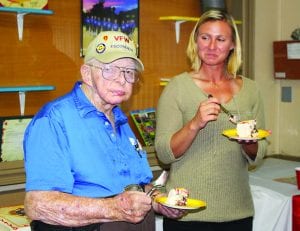 The oldest and youngest member of the VFW Post 1513 share the cake celebrating the post’s 90th birthday. The celebration happened Saturday. Shown are oldest member Bill Henson, U.S Navy (ret.) who was present in Tokyo Bay, at the surrender of the Empire of Japan to the U.S.; and SSgt Bryanna Kessler, USMC, a veteran of Operation Inherent Resolve.

Escondido’s VFW Post 1513 celebrated its 90th birthday in grand style on Saturday night with a barbecue bash that included an uplifting, patriotic address by a retired Marine and a celebratory cake. The post has about 120 members, and many of them were in attendance.

The John R. Simpson post was established June 10, 1927 and was based in several locations in the growing town, settling on its current mooring on Park Avenue in 1998.

Saturday’s meeting began with young men from the local Civil Air Patrol bringing in the colors. This was followed by the singing of the National Anthem. It is rare to see an entire room singing “The Star-Spangled Banner,” instead of listening while an individual does the honors. It was a 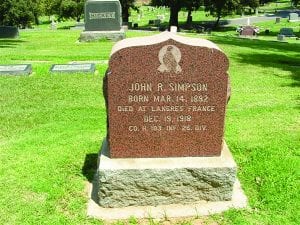 The gravestone of John R. Simpson, after whom the Escondido VFW post is named.

After dinner members welcomed Sgt. Major Joseph Sosa (Ret.) USMC, who served from 1972-2005, in just about every overseas posting that Marines have been sent to during that period, and many of America’s wars, including Desert Shield, Desert Storm, and Iraqi Freedom.

Sosa was a drill instructor and today he works at the Oceanside Post Office. His is a military family. One son just joined the USMC and another son is in the U.S. Navy, while a son in law is a senior chief in the Navy. Sosa just attended the 100th anniversary of the 5th Marines, which was formed in World War I and served on many missions in the century since that time. “They call them peace-keeping missions,” he said. “I call them something else.”

Before Sosa spoke, the post screened a three-minute video that he had narrated entitled “Old Glory.” Sosa is concerned that half of the young people today do not know what the stars and stripes stand for. “They don’t know what our flag is about, the way that many don’t know when their states entered the union.” 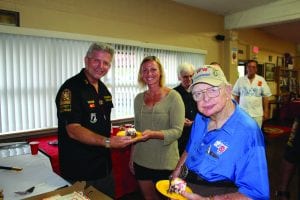 When the sergeant-major was a young man it was common for those who had just enlisted to know when their state joined the union. “Why do we have the white and the red on the flag?” he asked rhetorically. “It’s the blood shed of those who went before that makes the United States what it is today.”

When Sosa was a drill instructor his job was to “help my people be successful in life.” He shared with the post a letter he was working on that he hoped to finish before Father’s Day to give to his five sons—and perhaps someday be shared with his 22 grandchildren.

It was a letter that reflected Sosa’s deep Christian faith and shared some of his upbringing and values. “Grandpa and Grandma raised me because my parents worked in the field,” he recalled. Among many things he advised his children to “never be a bully and always be kind to people and never let a bully hurt the small guy.”

He advised, “always take responsibility for your actions and never get into a pity party for yourself.”

Finally, he talked about the importance of veterans taking care of other veterans, especially to make sure they know where to get the medical attention they might need. “We need to take care of our veterans who don’t even know where the VA is. Send them in the right direction so they can get treated.”

After Sosa’s speech Aaron Andrews of Senator Joel Anderson’s office presented the post with a Senate Resolution congratulating it on its 90 years and adding “Keep it up for another ninety years!” 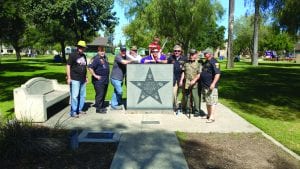 Members gathered around a cake celebrating the post’s 90 years. The oldest member of the post, Bill Henson, was joined by the youngest, Bryanna Kessler, to use a ceremonial saber to cut the cake.

Some facts about area veterans

Who was John R. Simpson?

John R. Simpson was a decorated veteran of WWI who fought in the St. Mihiel and Meusse-Argonne battles in France. He was born on March 14, 1891 in Chillicothe, Texas.  John’s parents, Mr. and Mrs. J.A. Simpson, moved to Escondido in 1914, and he followed them there the following year.  When the United States declared war against Germany, John registered for service right away. 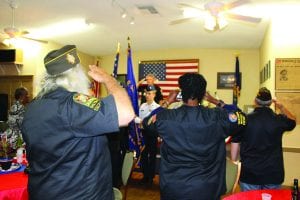 Members salute the colors as they are brought into the post’s dining room.

was established.  He transferred to Company D, 160th Infantry, 40th Army Division.  It was known as the “Sunshine Division” and was commanded by General Frederick S. Strong. Private Simpson was among 20,000 men ordered to France and sailed from Hoboken, New Jersey on June 3, 1918.

Upon his arrival in France, he was transferred to Company H, 103rd Infantry, 26th Army Division.  Private Simpson fought in the St. Mihiel and Meusse-Argonne battles in France.  He survived both battles without injury and sent a letter home stating he felt well and looked forward to coming home.  Private Simpson’s parents received his letter shortly after Armistice Day.  Fifteen days later, they received a telegram from Washington, D.C. informing them of their son’s death from bronchial pneumonia.  Private Simpson passed away in Hospital #53 in Langres, France on December 19, 1918.  He was 27 years old.

He was buried in Oak Hill Cemetery here in Escondido.