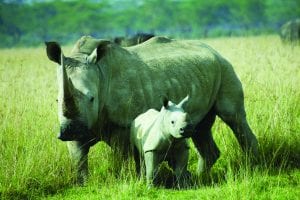 On Saturday evening, July 15, the local VFW Post 1513 hosted a fundraiser for Global Conservation Force (GCF), a non-profit organization dedicated to the training of and supplying anti-poaching units (APU) in the southern part of the African continent, principally in South Africa, Mozambique, and Zambia, countries notoriously weak and erratic in anti-poaching enforcement.

GCF also operates aggressively in Kenya where the enforcement is a dedicated part of the government’s mission.  The primary wildlife that GCF focuses on are elephants, Southern White Rhinos, giraffes, and pangolins.  In actual fact, though, it seeks to limit or eliminate the actions of poachers whatever the target animal is.  This evening’s activity sought to raise funds by selling Pangolin Draft Craft Beer, GCF T-Shirts and bumper stickers, and a silent auction of several items of art.  At the midpoint, a pictorial presentation on Pangolins was made to the crowd.  It was attended by a lively and young crowd noteworthy for their exuberance and support of GCF objectives.

The inspiration for GCF came in 2013 from Mike Veale, president and CEO, a Senior Mammal Keeper at San Diego Zoo Safari Park in Escondido, when he was handling two of the last eight Northern White Rhinos in existence (today that number through natural death is reduced to three.)  From that experience he requested an unpaid leave of absence, sold almost everything he had, and registered with ProTrack in Limpopo Province, South Africa, to go through the six-week Anti-Poaching Ranger licensing training.

Once he completed the training, he stayed on with ProTrack, which also offers complete APUs to both private and public wildlife reserves, for another three months on anti-poaching patrols in the Greater Kruger National Park bush.

When he saw how woefully underfunded and undersupplied most APUs in that area are in comparison to the poachers, he returned to the United States committed to help protect the remainder of the elephant and rhino herds from extinction.

For its part, GCF primarily raises funds to purchase essential equipment for the APU rangers.  Veale noticed a clear lack of proper clothing and footwear for the kind of work required on weeks-long patrols in the African bush.  He was equally concerned that rangers had no professional and adequate self-hydration equipment, backpacks, and tents.  A secondary, but equal, objective is to help fine-tune whatever training APU rangers have had to date; this is becoming more and more critical a part of GCF as their name and reputation gets around South Africa.

The ProTrack training Veale received would be familiar to what any infantry trainee has gone through.  Basic bush survival skills, weapons qualification, navigation by day and night, shelter construction, food acquisition and preparation, setting observation posts, intelligence-gathering, command structure, and reporting.  Coupled with this would be the necessary skills related to apprehension of suspected criminals, crowd control, crime scene investigation, and testifying in court.

The training was topped off with a 16-day long patrol meant to synchronize all classroom and field instruction.  Veale said that the patrol was deliberately meant to be realistic, so much so that he lost 40 pounds in weight and much body mass due to the lived experience of having to find food in the veldt while moving constantly.

Veale says that the poaching activity is brisk and highly experienced for the most part.  It is largely financed by a connected group of criminal enterprises, issuing first from both Vietnam and China, which overlap closely with other gang-related illegal activities such as weapons running, illegal drugs, and human trafficking.  In fact, poached animal parts represent the fourth largest source of illicit revenue globally after the other three mentioned.  Because the poachers are well-funded and organized, they can rely on the most modern equipment and weapons in search of targeted wildlife.

One poaching method is to steal tranquilizers from veterinarian hospitals, fly by helicopter to force the wildlife into the open, shoot the rousted animal with a tranquilizing dart, then land and surgically remove the tusks or the horn leaving the animal to bleed out.  The whole operation once an animal is located takes very little time at all.  And that makes enforcement difficult.

The Asia-Southeast Asia connection derives from the perceived folk medicinal properties associated with pangolin scales and rhinoceros horns and the ivory from elephant tusks used for carving expensive artifacts.  As well, pangolin meat is considered a delicacy both in South Africa and in Asia.

Veale’s original concept has gained a lot of attention since he began.  He has a good problem that any good, relevant organization always goes through—demand for his services and supplies is increasing geometrically while his personnel and funding is doing so arithmetically.

The fundraiser highlighted specifically the poaching associated with the pangolin, an anteater with the ability to climb trees, at times referred to as “an artichoke with legs.”  As a mature adult, the pangolin has thick, hard, and barbed scales similar to an aardvark.  When threatened, it rolls into a ball to make itself virtually unapproachable: there is just nothing to grab on to while the barbs on the scales do the damage when an attempt is made.  Yet, the defense that works so well against predators is a key advantage to a poacher who can just pick the pangolin up once it has rolled itself up.

The pangolin is now declared the most trafficked wild animal in the world.  In the last decade, it is estimated that over one million of them have been poached illegally and the numbers are increasing.  Of the eight species of pangolin globally, four are listed as vulnerable, two are listed as endangered, and two are listed as critically endangered on the International Union for Conservation of Nature Red List of Threatened Species.

What these hunted and poached species mean to the local and regional economies makes the entire poaching subject relevant to virtually anyone.  In these regions where there are no credible resources to exploit, eco-tourism goes far to supporting the population.  Both the nations of Kenya and Botswana understand this and enforce anti-poaching efforts vigorously.  Both hunting and photographic safaris bring in a tremendous amount of foreign capital to sustain a living average wage while upgrading the educational opportunities throughout the country.  Regulated and controlled hunting takes into account normal conservation principles; poaching takes into account only the greed driving the activity.  Without the elephants, rhinos, pangolins, and other targeted species, the local citizens wouldn’t stand a chance.

Veale’s vision for GCF is to establish sufficient financial stability in order to handpick paid “specialists” or area knowledge experts for each zone of critical concern in the world, mostly in Africa and Asia.  A “specialist” would have the responsibility to establish and maintain contact with the APUs in that area, generate the funding necessary to support the APU ranger training and logistics programs, execute and sustain all operations pertinent to that area, and elevate the public face of the organization within the greater community.  On display, for instance, at the fundraiser were examples of the kinds of equipment supplied by GCF to APU rangers accounting for a large portion of the logistics train it has set up.

What seemed an insurmountable skeleton four years ago is now beginning to take some flesh on the bones.  Mike Veale sits calmly discussing what amounts to a battle going on every day in parts of the world that most of us have only seen on Marlin Perkins’ “Wild Kingdom.”  He has been there and seen the destruction.  Yet, due to the hope that is surfacing among a growing communal family dedicated to eliminating poaching of all kinds, he feels that the time is right and the people are available.  He is now seeking partners and allies who would share his vision, even his steady character.  More information about GCF can be found at their website globalconservationforce.org/.