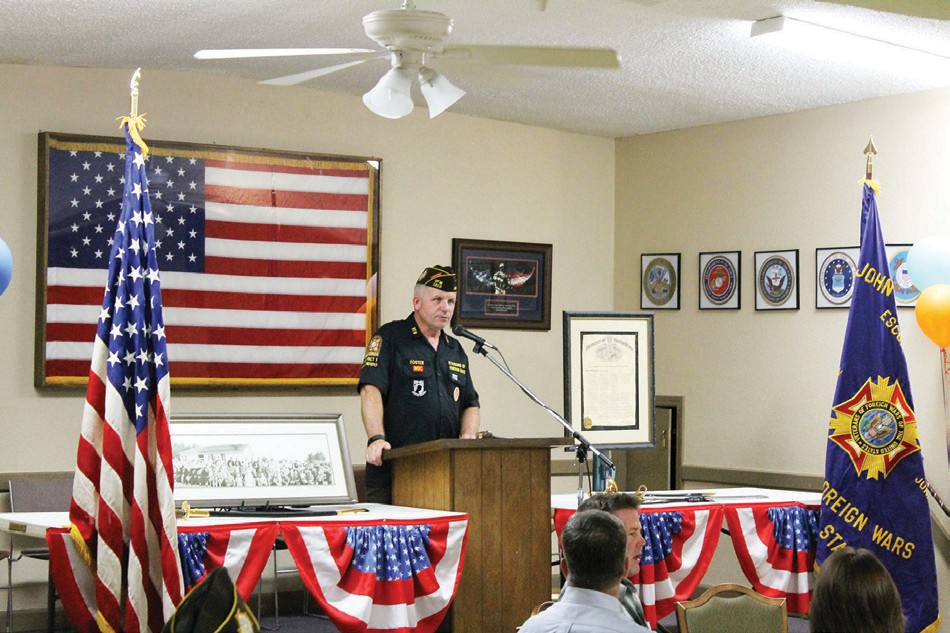 Post Commander Matt Foster addressing the cel­ebrants of the 89th anniversary of the formation of Veterans of Foreign Wars Post 1513.

On Saturday, July 9, over 50 veterans, family members, and friends gathered at Escondido’s Veterans Memorial Hall to celebrate the 89th an­niversary of the formation of Veterans of Foreign Wars Post 1513. The post is now planning its 90th birthday party to be announced in early 2017 by invitation to a wider community base.

The post hosted a casual dinner to celebrate 89 years of serving veterans and the community, while raising funds to aid in the post’s veterans’ outreach efforts, such as serving dinner meals once a month at the Fisher House 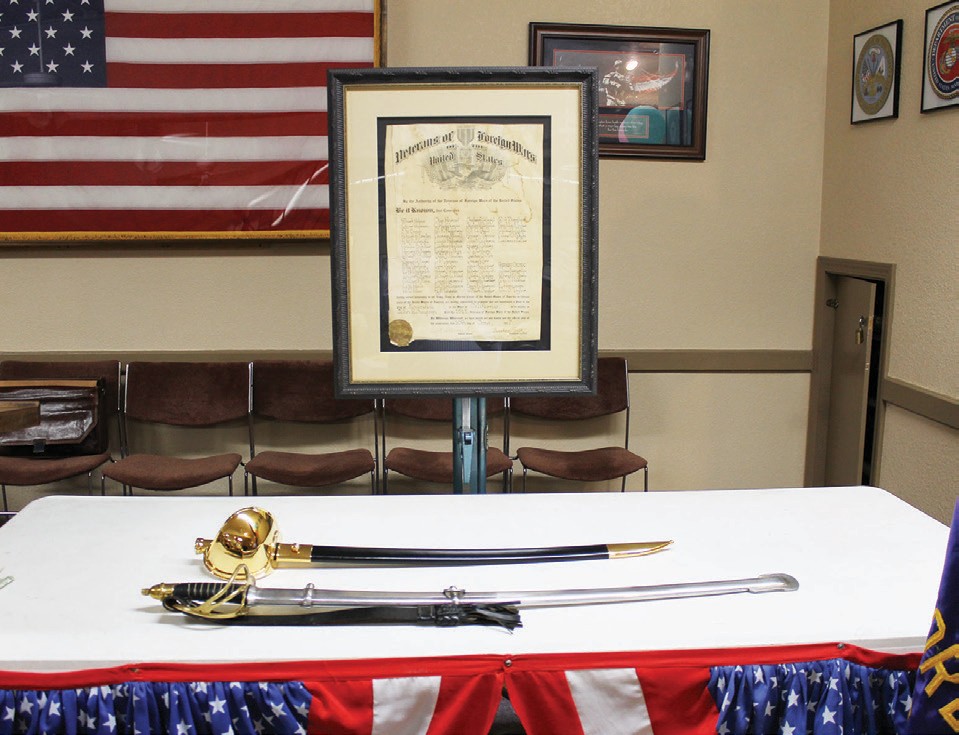 Camp Pendle­ton for those residents who have family members, both active duty and retired military, at the base hospital nearby.

The guest speaker for the evening was Master Gunnery Sergeant Douglas Fraser, operations chief for 1st Marine Expeditionary Force (I MEF), Camp Pendleton. MGySgt Fraser shared his grat­itude for veteran service organizations such as the VFW for playing a key part in the continu­ing remembrance of the U.S. military’s part in the founding and protection of our country.

In attendance was Escondido City Councilman and VFW member Ed Gallo, an Army veteran of the 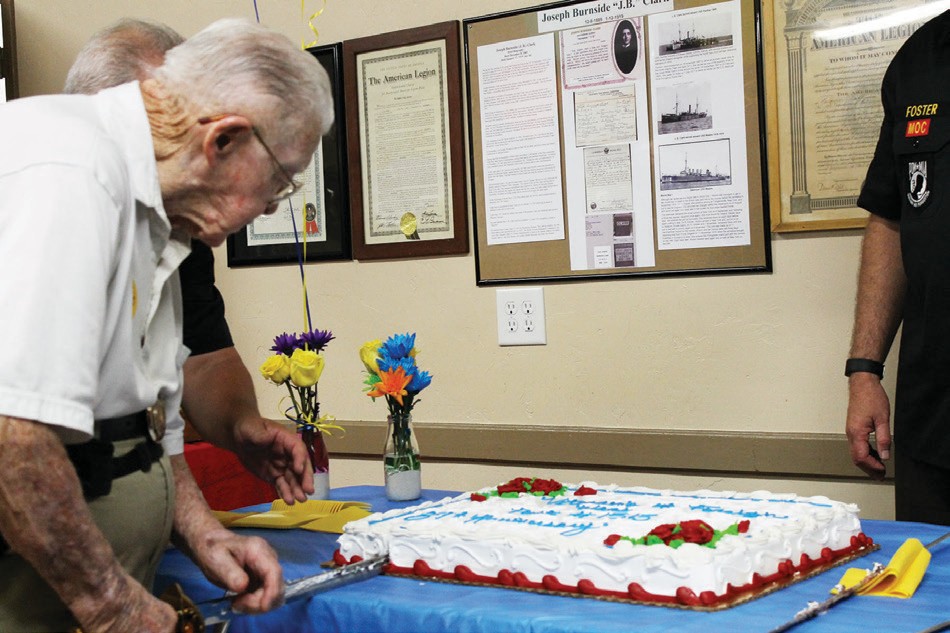 Korean War, representatives from Senator Joel Anderson’s office, and VFW Auxiliary’s Past State President Gloria Palmer and District 1 Presi­dent Oneita Billings. Palmer spoke to the post about how to create an auxiliary. Her speech was well received, and family members showed much interest in being among the first to join. 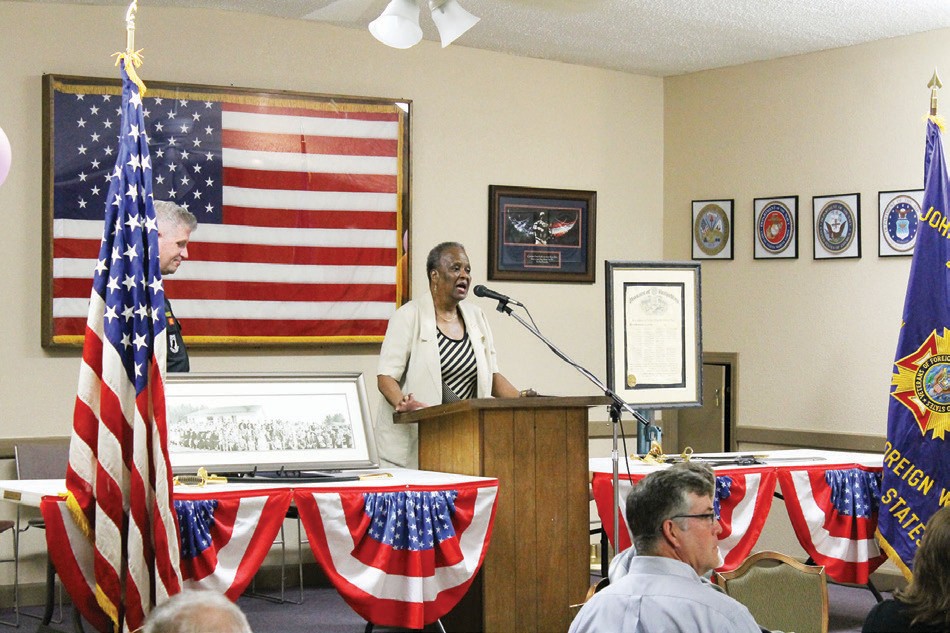 Gloria Palmer, VFW Auxiliary, speaking on behalf of the Auxiliary.

Auxiliary is now forming. Grandparents, spouses, sons and daughters, and grandchildren of veterans (living or deceased) who are qualified to join the VFW may join the Auxiliary. For more information, visit vf­wauxiliary.org/. To become a Charter Member of VFW Post 1513’s Auxiliary, email the post at vf­w1513auxiliary@gmail.com.

VFW Post 1513 is looking for veterans of all wars. Meetings are at 6 p.m. on the first Tuesday of every month in the Veterans Memorial Hall 230 E. Park Ave in Escondi­do. To learn more about the Post, visit www.vfwpost1513.org and www.facebook.com/vfwpost1513.