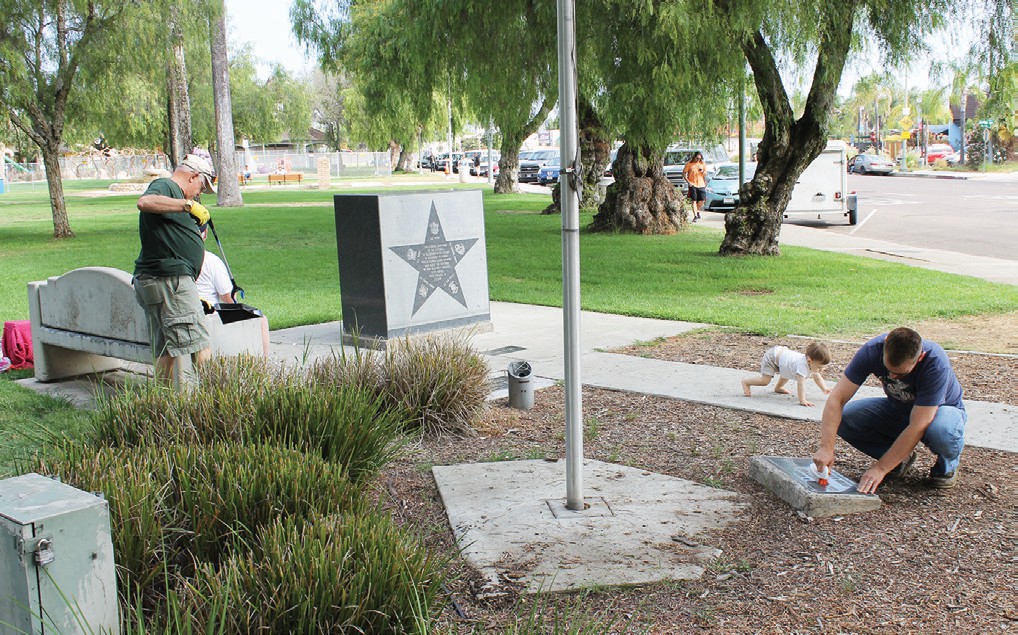 Cleaning up the Wall of Courage is a family affair.

The Veterans Corner is a monthly column prepared by the local Veterans of Foreign Wars Post 1513 for The Times-Advocate.

On the first Saturday morning of every month, a group of veterans and friends gathers to clean the Wall of Courage in Escondido’s Grape Day Park. The unassuming memorial, consisting of three walls and three bronze statues, bears the names of military members who served in conflicts from World War I to the current war in Iraq.

The Wall of Courage was unveiled in 2007, but was not yet filled completely with tiles bearing the names of local veterans and veteran organizations. More tiles have been gradually added since then to fully populate the open space on the three walls. Once the wall neared completion, the original creators and fundraisers turned the monument over to the City of Escondido. It was then that Escondido’s Veterans of Foreign Wars Post 1513 approached the City and offered to care for and maintain the wall going forward. An agreement to do so was finalized in 2015 and the work to keep it cleaned up has happened regularly since then.

Gary Nordby, VFW Post 1513’s own resident chaplain, organizes these monthly clean-ups and brings along several armloads of supplies to facilitate them. Also on the morning’s agenda: cleaning up the Bill of Rights Obelisk at the other end of the park and the benches nearby. While vandalism is occasionally a concern, for the most part, the clean-up consists of removing leaves, debris, spider webs, and more than a few gifts left behind by resident and migrant birds.

The Post is now campaigning publicly to add more tiles to the current walls. Application forms and associated costs for anyone who would like to do so can be found on the Post’s website. The Post is also exploring the idea of a design contest in the future that would add space to the current monument. Added wall space would expand 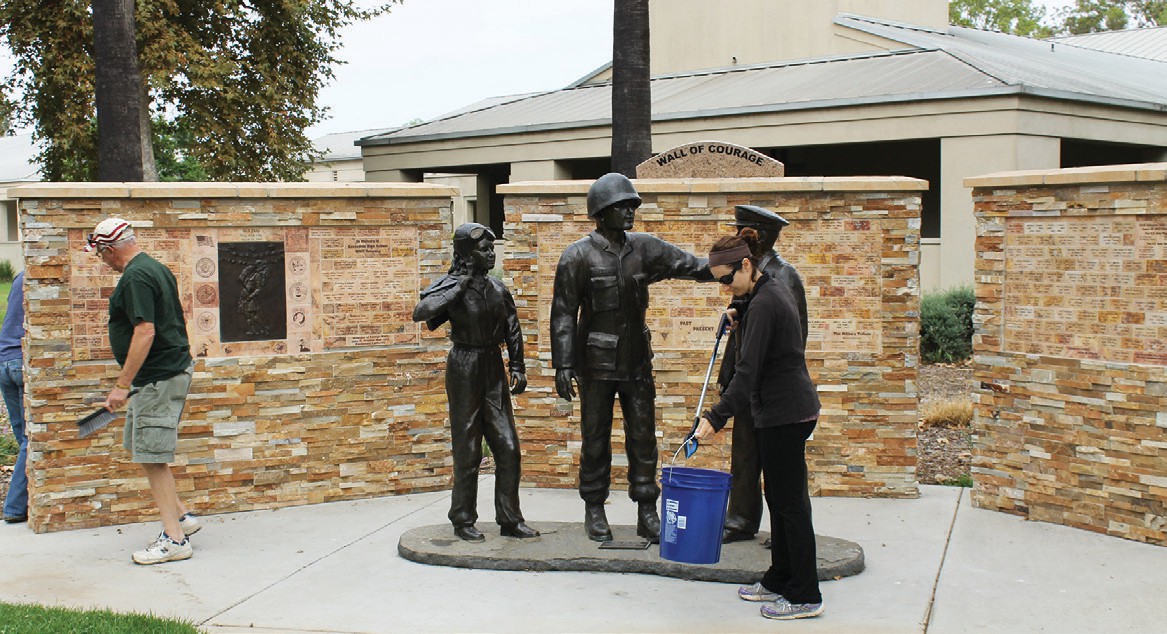 The Wall of Courage gets one of its periodic sprucing ups.

the available area for tiles so that more local citizens would have a permanent way to celebrate Escondido’s rich veteran’s heritage.

VFW Post 1513 is looking for veterans of all wars to become members. Meetings are at 6pm on the first Tuesday of every month in the Veterans Memorial Hall 230 E. Park Ave in Escondido. To learn more about the Post, visit www.vfwpost1513.org.

Each year, nearly 40,000 high school students from across the country enter to try to win a share of $2 million in educational scholarships and incentives awarded through the VFW’s Voice of Democracy audio-essay competition.

The VFW established the Voice of Democracy program (VOD) in 1947 to provide students grades 9-12 the opportunity to express themselves in regards to democratic ideas and principles.

The national first-place winner receives a $30,000 scholarship paid directly to the recipient’s American university, college or vocational/ technical school. Other national scholarships range from $1,000- $16,000, and the first-place winner from each (state) VFW Department wins a minimum scholarship of $1,000 and an all-expense-paid trip to Washington, D.C.

The Voice of Democracy Program is open to students in grades 9-12 (on the Nov. 1 deadline), who are enrolled in a public, private or parochial high school or home study program in the United States and its territories.

THE 2016-17 THEME IS: MY RESPONSIBILITY TO AMERICA

Students should record their reading of the draft to an audio CD or flash drive. The recording can be no shorter than three minutes and no longer than five minutes (plus or minus five seconds).

Submittals to local VFW Posts are defined by the city or cities the Post represents. Once Escondido and Valley Center students create their essay and complete burning the audio version to an audio CD/flash drive, they can submit their typed version, CD/flash drive, and the Voice of Democracy entry form to Commander Matt Foster, VFW Post 1513, 230 E Park Avenue, Escondido, CA 92026 by 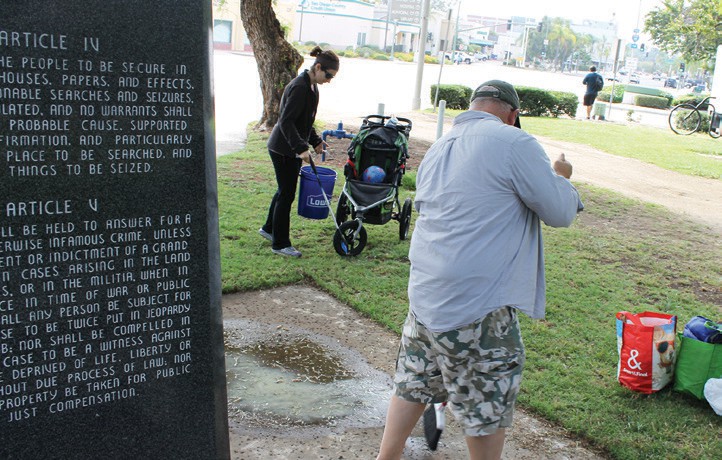 The Bill of Rights obelisk needs to be swept regularly.

the November 1 deadline. Students from other cities and towns should identify the Post representing their area and submit to the commander of that specific Post.

More information on the theme and submittal process and access to the forms required can be found at www.vfw.org/VOD/

Each year more than 132,000 students in grades 6-8 enter the VFW’s Patriot’s Pen youth essay contest. The first-place winner from each state competes for national awards totaling $54,500, with each first-place state winner receiving a minimum of $500 at the national level. The national first-place winner wins $5,000 and an all-expense-paid trip to Washington, D.C.

The essay contest encourages young minds to examine America’s history, along with their own experiences in modern American society, by drafting a 300- to 400-word essay, expressing their views based on a patriotic theme chosen by the VFW Commander-in-Chief.

The Patriot’s Pen program is open to students in grades 6-8 (on the Nov. 1 deadline), who are enrolled in a public, private or parochial school or home study program in the United States and its territories.

Students can ask a teacher or youth group leader to supervise their progress in the competition. Then students can contact a local participating VFW Post and establish a contact person who is a member of that Post or its Auxiliary.

Essays must be no less than 300 words nor exceed 400 words. Submittals to local VFW Posts are defined by the city or cities the Post represents. Essays by students in Escondido and Valley Center along with the completed Patriot’s Pen entry form should be submitted to Commander Matt Foster, VFW Post 1513, 230 E Park Avenue, Escondido, CA 92026 by the November 1 deadline. Students from other cities and towns should identify the Post representing their area and submit to the commander of that specific Post.

More information on the theme and submittal process and access to the forms required can be found at www.vfw.org/PatriotsPen/