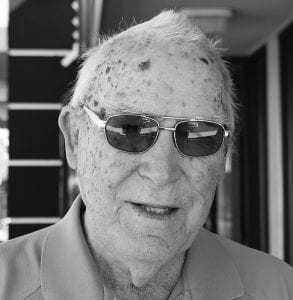 Ron Kenney Sr. who was a newsman for more than four decades, including 27 years with the old Daily Times-Advocate, died on Friday. He was 86.

According to Tyson Kelly, his grandson, he passed away at Palomar Hospital.  As yet we have no information on services for Mr. Kenney.

He wrote the Escondido Reflections column for this paper for a time, and, said his grandson, “He really enjoyed doing it as it let him be who he enjoyed being, a journalist.”

In January of 2017 he wrote his last column for us. He noted that he was 85 and that the issues associated with aging made it more and more difficult for him to write.

In his columns Kenney wrote a lot about his earlier career when he walked into the old Times-Advocate office as a youth and asked for a job.

Kenney wrote: “[I]t was 63 years ago that I went to work at the Daily Times-Advocate; the rawest of raw rookies. And it was 36 years ago that my relationship with that newspaper ended when I decided it was time to leave.

“I had been affiliated with The Times- Advocate, or more familiarly or lov-ingly — the T-A — for 27 years under three different ownerships.

“Now, after all those years and the unforeseen demise of the daily T-A, I have been asked to reflect on some of those early years and my feelings and thoughts, this time for another “T- A”, this publication of the Times-Advocate, which has no connection to the newspaper for which I once was employed, except for the name.”

Two weeks after graduating from Palomar Junior College in June 1951, Kenney was married  in Escondido to an Escondido girl on her 20th birthday. “I was 19. The next day we were on a Greyhound bus for a three-day cross- country trip to my hometown of East Liverpool, Ohio, a city of about 25,000 population along the Ohio River, about 30 miles west of Pittsburgh. The plan was to spend the summer with relatives before my enrolling at an eastern university to continue my college education.”

Plans didn’t work out. He didn’t enroll. He and his wife found jobs and stayed in Pittsburgh for a year before returning to Escondido in June 1952.

“So here I was: 20 years old, no job prospects, a pregnant wife, and living with my in-laws. It was mid-July and I had been walking Grand Avenue, placing an application for work — any type of work — at business establish-ments along the avenue. I stopped in the Bank of America, hoping to land a job as a teller. In those days, the Bank of America was at the southeast corner of Broadway and Grand, the current location of Draper’s and Damons’.”

He filled out an application for the bank and met with a bank official who told him that he had no openings, but that because Kenney had listed journalism as one of his courses in college that he should go to the newspaper office.

“I understand they’re looking for a reporter at The Times-Advocate just down the street.’ ”

Those words opened the door that led to 27 years with the newspaper and took him from raw rookie to editor.

“I walked the two blocks to 237 East Grand Ave., the then location of the T-A office and production plant. I spoke to some lady behind the coun-ter of the small office that I wanted to apply for the opening. (It was for a sports writer, I learned,)” recalled Kenney.

Kenney had taken two years of journalism in college and had been editor of Palomar’s student newspaper, The Telescope. That experience gained him an entrée to the paper and he started on probation for $20 a week, as a sports writer.

He wrote, “Was it fate? I don’t know. I’ve never considered myself a fatalist, but sometimes I wonder. Here I was: 20 years old, a ‘kid,’ no newspaper experience, no college bachelor’s degree, but my goal after graduating Palomar was to be a high school En-lish teacher or a newspaper reporter, neither of which I had any expectation of attaining. Yet I had just been hired on the staff of a small community daily. It was a start!”

Kenney, a 60-year resident of Escondido, was a reporter and editor with the former Daily Times-Advocate from 1952 to 1979 and a copy editor on the editorial pages of the San Diego Union-Tribune from 1985 to 1997.

Kenney was a fierce defender of the First Amendment and once wrote: “How many times have you felt that somebody with whom you disagree or somebody you just don’t like should be silenced? That they should not be allowed to say those things; that they have no right to say those things? That they don’t think the way I do? I’m sure you’ve had similar thoughts if you’ll be honest with yourself. Sometimes I find myself thinking about those who say and do things with which I find disturbing: If you don’t like the status quo, then leave the country. But, then, I realize that they have just as much right as I do to say and do anything, as long as it’s within the bounds of the law? And what gives any of us that right? It’s called the First Amendment to the U.S. Constitution: Congress shall make no law . . . abridging the freedom of speech or of the press.”

About his time with the earlier Times-Advocate, Kenney wrote, “Without question, the 27 years I was with the Times-Advocate, especially during the 13 years of Carl Appleby’s ownership, were the happiest days of my professional life. Perhaps this was because I literally grew up with the paper. I was a 20-year-old kid with no experience, starting as a raw sports writer on a very small paper of about 4,000 circulation and advancing to become the editor at the age of 33 in charge of 20 other persons on a thriving, respected medium-size daily of about 35,000 circulation.”

When he started at the T-A in 1952, it had fewer than 20 total employees; when he left in 1979, it had about 200 employees. “I knew most of them on a first-name basis. This was one factor that made this particular workplace more like ‘family.’ While I had seen some turnover in those 27 years, there were a few of those colleagues who had been with the T-A for more than a few years. From among them, I forged three close and intimate friendships that lasted more than 50 years.”

He wrote, “The Times-Advocate began a dramatic transformation in 1965 when Carl Appleby became owner and publisher. (He had retained me, and promoted me to editor.) It was under his guidance that the T-A became a respected newspaper throughout the state; it was literally award-winning, having been awarded first place in general excellence in the state (by the California Newspaper Publishers’ Association) and in the country (by the National Newspaper Association).

“It was because of Carl that I was able to interact with other editors and newspaper-related organizations, exchanging ideas. He permitted me to spend time outside the T-A on activities that benefited me, but also the T-A itself. During those 13 years as Carl’s editor, I had lectured in the journalism departments of eight western universities, including the University of Oregon, Northern Arizona University and the University of Southern California.”

When Appleby sold the paper to the Tribune Co. of Chicago in 1977: “I chose to stay while the other five departmental managers left, but I knew that things would never be the same. I stayed for another year and a half, resigning in August 1979, after 27 years almost to the day, knowing that I was not compatible with corporate management.”

When he arrived home and told his wife, he began to cry. “Most people would understand,” he wrote.

In May 1980 he and his wife moved to western Pennsylvania. He became a managing partner in a restaurant and lounge. After a year, he sold his share in the and purchased a music store.

Then in 1983, he received a phone call from a former colleague in the T-A’s advertising department. “He was calling from Escondido, asking if I was interested in becoming editor of a new weekly newspaper he was planning to start. The paper would be going up against the Tribune Co-owned Times-Advocate. Jim said he had 20 local investors willing to finance the operation, and that I could hire two other persons of my choosing for the news staff.”

After consulting with his wife, she agreed and they drove 2,300 miles back to Escondido.

He and six former employees of The Times-Advocate began organizing “The Reporter,” a 16- page, two-section weekly that was mailed free to 30,000 residents in Escondido and San Marcos. The first edition was published in June 1983.

He wrote, “But it was not to be. We were unable to sustain enough revenue from advertising to continue publication, and investors were unwilling to contribute any more cash to finance the operation. So, in December 1984, 17 months after start-up, “The Reporter” was sold for $50,000 to Robert Herring, an Escondido businessman who owned Industrial Circuits in Saber Springs. Herring kept the paper afloat another year, but finally closed the operation for lack of advertising. I learned a new respect for weekly papers in the year and a half in which I was involved with the struggling “Reporter.” It was sometimes a seven-days-a-week job.”

Following six months of being out of work, Kenney was hired in June 1985 by the then San Diego Tribune,the afternoon newspaper of the Copley organization, whose flagship was the morning San Diego Union. He was hired as an editorial page copy editor, but eventually was named the letters editor.

He wrote, “I was with the Tribune for seven years until 1992 when it discontinued publication, merging with the Union to become the San Diego Union- Tribune. I was among the fortunate employees who survived the merger and was retained on the new Union- Tribune. Several hundred employees lost their jobs as a result of the merger. I retained the title of copy editor, but I essentially became a full-time letters editor. We were receiving an estimated 100 letters a day, and all of them had to be at least perused.”

The U-T operation was in a five-story building in Mission Valley with more than 1,000 employees. “Here I was now a part of more than 1,000 employees after working for a medium-size daily which, at its peak, had about 200 employees; and then a weekly paper with 10 employees. What a world of difference. I now was just a face in the crowd, a number on an employee list. And the 60-mile, round-trip to and from San Diego was a drag, after living and working in the same town (Escondido) all those years. There were days I even could ride my bicycle to work.

“I certainly couldn’t complain about the salary and benefits working at the Union-Tribune. But there was something about the workplace in which I just didn’t fit. So when I reached 65 in January 1997, I retired. It has been almost 20 years since that day, but the memories remain.”

Leave a Reply to Alan B. Skuba Cancel reply