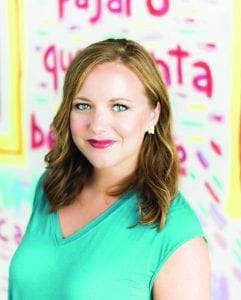 Escondido resident Erin Decker has been appointed vice president of development for the New Children’s Museum in San Diego.

Decker comes on board as the Museum looks forward to its 10th anniversary and embarks on a five-year vision.  Her expertise in philanthropy and stewardship will assist the Museum as it seeks to build capacity and expand its reach to the community.

Decker joins the museum as vice president of development, after over a decade in non-profit arts fundraising. Most recently, she held the position of senior associate director of development at the La Jolla Playhouse.  She serves on the Steering Committee of the San Diego Regional Arts and Culture Coalition and enjoys active membership with Americans for the Arts, the Association of Fundraising Professionals, Escondido Charitable Foundation, and North County Philanthropy Council.

Decker received her B.A. from UCLA, where she studied International Economics and Spanish. Along with her husband Doug and their daughter Eliza,  Decker is a proud resident of Escondido. In her spare time, she enjoys singing with the San Diego Master Chorale, cooking, traveling, backpacking, jogging, and playing tennis.

“My career has been devoted to enhancing lives and educating the public through the arts, and I look forward to continuing that work at this innovative, vital organization,” Decker said.  “It is an honor to support an institution that champions creativity, confidence, and community in San Diego’s future generations. I can’t wait to get started.”

The New Children’s Museum is a new model of children’s museum whose mission is to stimulate imagination, creativity and critical thinking in children and families through inventive and engaging experiences with contemporary art.