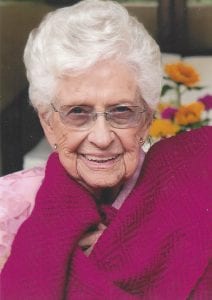 Velma Evelyn West passed away October 4, 2018 in Oklahoma City, Oklahoma while attending her late husband’s WWII reunion, the 483rd Bombardment Group (H) Association. Velma was born June 13, 2018 in Lamar, Colorado. She was the third child of Dennis and Floy Walker. She had two older brothers and a younger sister.

Velma Walker graduated early from high school with honors and dreamed of going to college, but the family could not afford to send her. A friend of the family that was a native of Lamar but lived in Pasadena, California was visiting and wondered why Velma was not in college.

In 1952, Mrs. West was approached by the principal of the elementary school to consider teaching for the school was in need of teachers. She taught on a provisionary credential until she was able to earn her elementary credential.  She taught grades 2 through 6.  She later became a curriculum consultant for the Garden Grove Unified School District. She received her master’s degree, again with honors, from Long Beach State University and became an elementary school principal. She and Keith took early retirement and moved to Valley Center, California in 1976.

The couple was active in the Dos Valles Garden Club and Mrs. West became a master floral designer, flower show judge and teacher of floral design. She also started the Design Forum which is still in existence.

Velma West was all about people and relationships and helping others achieve their best. She cherished her family, her friends, and her church. She is survived by her two children, 3 grandchildren and 3 great grandchildren.

A memorial service will be held Tuesday, December 4, 10 a.m. at Emmanuel Faith Community Church in Escondido.  Contributions can be made in Velma’s memory to Point Loma Nazarene University.

One response to “Velma Evelyn West, 100”