Vanessa Valenzuela wants to focus on “potholes and neglected parks” 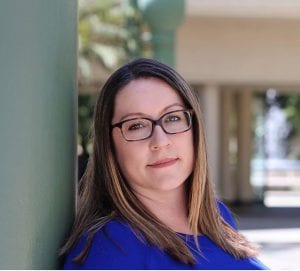 Vanessa Valenzuela has lived in Escondido since age  6. She graduated from Escondido High School and followed with a year at Palomar Community College.  She is a candidate for District 2 city council.  Her opponents include incumbent John Masson and another challenger Nicole Downey.

She is a controller by profession and started for the Rancho Santa Fe Association, where she was controller for six years, followed by several years at the Country Club of Rancho Bernardo. Both had private golf courses. She is currently controller with the design firm of Tucker Sadler.

Both the Rancho Santa Fe Association and Country Club of Rancho Bernardo function as quasi-governments, she says. “I’m familiar with city-sized operations and how they work.” One has 2,000 properties, which, is 15% of the size of Escondido.

A single mother with three kids, a freshman, sophomore and junior at Escondido High School, she has volunteered with the Boy and Girl Scout programs and worked with family holiday meals for Interfaith.  She volunteered with their adopt a family meal program 2008-2012 procuring and coordinating donations.

Although she is endorsed by the local Democratic party, Valenzuela is not affiliated with any political organization. “I consider myself focused on the specific issues of our unique city,” she says.

Why is she running?  “I grew up here. I really love Escondido,” she says. As a mother with three children she has noticed a decline in quality of life in the city.   “We had a pool closure and the closing of the East Valley branch of the library. All these things were on my radar as a mom.  My first reaction was that I started to dig deeper.”

Her first public involvement with the city was with a controversy where a water treatment facility was at first proposed for a residential area, much to the chagrin of many residents. Valenzuela became involved with the (ultimately successful) fight against that facility’s location.

Her next involvement with city politics was in February 2017 when the council raised water rates for the next five years. “It seemed to me a little excessive, especially when they had just said ‘We are out of the drought.’  I watched the meeting. Staff said raising the rates for two years was sufficient but the city council voted to raise it for five years.”

Her experience as a controller prompted her interest in city finances. In June of 2017 she recommended the city create a “budget committee.” “I asked for a budget committee to be put on the agenda. John was the only one who hemmed and hawed about it. Mayor Abed said it wasn’t necessary and that it would waste staff time.”

About this time Valenzuela began to make public records requests. She has made at least 12 such requests. “I discovered that for some reason in the budget they took out the individual descriptions of staff positions. Now it’s just a summary.  This was a recent change. That information had been provided for years. It required more work to change it than it did to provide it.”

This provides the public with less knowledge about how the city operates. “My theory is that it gives the public less knowledge and that’s why they do it.” This happened around the same time the council approved a salary boost of $50,000 for the city manager, which as of this writing makes Jeffrey Epp’s salary and benefits about $466,450.88 (according to the website TransparentCalifornia.com.)

Valenzuela adds, “Just to extend our discussion on highly compensated employees — as recently as the 6/20/18 council meeting item #15:  The city attorney received a 5% ($11,500 annually) salary increase that received little attention.  His contract was also modified to convert five more days to cash.  When you make $116 per hour, that’s nearly $5,000 annually. It’s not just one person, it’s collective. Doling out pay increases to highly compensated employees is a slap in the face to residents who drive on pitted streets and are told there is no money for park upgrades.”

She adds, “I know how the budget process works. When you remove individual staff salaries it’s to provide less transparency. It’s common practice to provide that information. They changed something they once provided.”

If someone asks why they should vote for her, Valenzuela replies, “I feel my professional experience lends itself to improving our budgetary process and finding ways to save money.”

She feels two neglected areas are roads and parks and priorities focus more on building and development. “When you are elected your job is to serve all the community and champion priorities that are being neglected such as the homeless AND fixing potholes.”

She adds, “We are growing at an accelerated rate but we can’t keep up with the potholes.”

Regarding the library outsourcing, which she opposed when the council adopted it last year, she observes, “It seems less welcoming now. They have removed the some of the café seating and it seems less inviting.” She and her three kids are “avid” library users, she says.

This means a lot to them, she says, “Because the kids grew up with a very different Escondido library. They spent a lot of their days here.”

During the lead up to the council’s decision to outsource to LS&S (Library Systems and Services) Valenzuela feels the city administration presented only one side and prevented people such as herself from making a unified presentation in opposition.

“We asked to present another option [asking the County library system to take over the Escondido library] and they wouldn’t allow us.” The city limited each speaker to three minutes.

“I feel that all of our requests have fallen on deaf ears. I don’t feel they represent the everyday resident.” She also doesn’t feel the savings realized by the library will make much of a dent. “It is one half of one percent of the budget,” she says.

Given that the city council has known that the CalPers pension crisis is coming for half a dozen years, “and now it’s time to pay the piper,” she questions whether it was appropriate to give the city manager and other administrative officials a raise. “I find in concerning that we didn’t have anything in place at this point six years after we first learned of the problem,” she says. “There has been enough time.”

She notes that one way the city is raising money for when the hammer falls is divesting itself of property, such as the former police station which was sold to the Gateway project.

Even if the changes the city has taken in how it funds CalPERS—which includes employees unions paying more of their pension premiums—doesn’t guarantee against fluctuations in what the state charges, says Valenzuela.

Although the city could raise sales tax to offset such a possibility, she would like to explore the possibility of Community Choice Energy (aka Community Choice Aggregation” or “CCA”) in which Escondido would create its own source of energy and sell it.

In June Solana Beach became the first city in San Diego County to, in the words of the Del Mar Times: “break away from SDG&E’s century-old monopoly.”

If Valenzuela has her way, Escondido might be the second such city. “I think it could be good for the residents and creating a workable solar for the city,” she says. “Right now we are reliant on property and sales tax, but if there is another meltdown, the city could be in a precarious position.” She adds, “We should have a diverse portfolio, before we get to the point where we can’t build anymore. We shouldn’t put all of our eggs in one basket.”

She feels the city should address possible bad times by closely watching salaries. The $1.5 million spent on each department doesn’t even include outsourcing legal fees.  She is skeptical about the $400,000 reportedly saved by outsourcing the library to LS&S. “Since we are also hiring an additional position to oversee the library who will get $200,000 with benefits.”

She feels other city employees are not treated as generously as officials in the top echelons, such as the city attorney and city manager.

The candidate feels there is “a lot to be desired” in activities for teens in the city. “As a parent that’s what I hear the most from other parents.,” she says. “They want to spend their money here in Escondido. One of the things on my listening tour of the city that I hear the most was that our parks do not get enough attention and parents are resigned to not using them anymore. That has been my focus. It hasn’t been a priority for my opponent, John Masson.”

Valenzuela believes Escondido will attract more business if it makes quality of life issues such as parks and potholes a bigger priority.

She is concerned about the proposed Daley Ranch Resort specific plan, whose developer requests annexation into the city.  This is a proposed development on 207.6 acres adjacent to Daley Ranch Open Space Preserve. “It doesn’t provide a benefit for the money the city will put into it,” said Valenzuela. “I’ve done a lot of research,” and she believes the development would adversely impact the preserve. “I feel residents should be brought on board because it will require us to provide infrastructure, fire and police and it doesn’t provide a benefit.”

To conclude why residents of District 2 should vote for her, Valenzuela says, “I am a thirty year resident. I am invested in this city. I want Escondido to thrive again. I believe my financial expertise will help the city make better long-term financial decisions. I’m not a politician. I’m a real person from this city who wants to see issues of every resident prioritized. I don’t see myself as a politician, but I am running because I see things that require action.