Van Quackenbush, my most unforgettable character 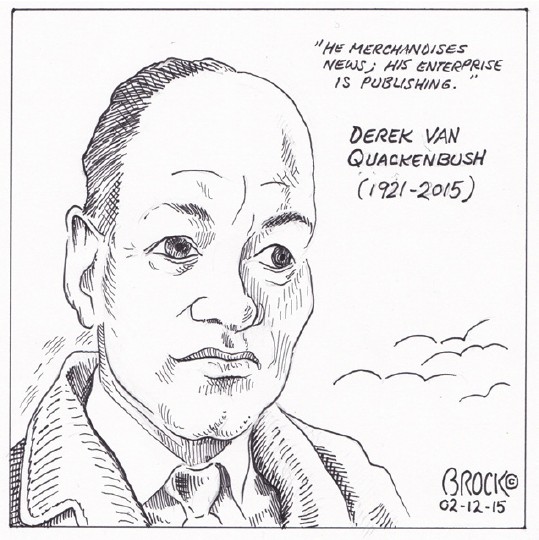 For years Readers Digest has had a section called “My Most Unforgettable Character,” and while my 30 plus years reporting the news in Valley Center has introduced me to many who are in the running for that job, Van Quackenbush wins the title—hands down!

I’m sure if there was a vote taken of Valley Center residents who knew Van in his salad days as the beloved publisher and editor of the town newspaper, The Roadrunner—it wouldn’t even be close.

For in his day Van was known to just about everyone in town. He couldn’t walk down Valley Center Road (something he loved doing, especially with his a couple of his cronies) without people honking or even pulling off the road to chat with him.

I remember the first day I met Van and Marge. He was sitting at the front desk of his newspaper. He may have been updating the subscription list, which was kept on index cards. He took me inside to show me around and introduce me to Marge, his faithful wife and partner through all of his journalistic endeavors. Although he was typesetting the paper on a Kaypro personal computer (a PC that was actually made out of metal), he still used an ancient typewriter to write his editorials. It was fed by a long roll of brown butchers paper that enabled the writer to write and write and write without ever having to add paper. An interesting method for not interrupting the flow of words before word “processors” took over this function.

When Van was composing he would hum the theme from Dragnet. You know: “Dum de DUM dum. Dum De Dum Dum DUMMM!” When Van lost a pen or a book or piece of paper, he would declare an emergency and recruit everyone in his little office to conduct a search for the missing relic.

When Van was resting he would lie flat on the floor, due to a back injury, and read a newspaper or news magazine and grouse about the generally disreputable nature of modern journalism (remember this was decades before Sarah Palin and the “lamestream news). By that he didn’t mean community journalism, which is different from mainstream journalism, the journalism of daily newspapers and TV, and if the trends are to be believed, may well outlive it.

Van reveled in the news business. He drove a car for years that had a license plate that read “4THESTAT” or something like that. When you drove through the gate into his beautiful property with the fantastic view of Palomar Mountain, it too greeted you with “Fourth Estate.” He had a dog named “Scoop.”

In his office he had a rack of old linotype numbers and letters made out of lead. Van was one of the last of a breed of newsmen who grew up “throwing lead,” setting type backwards. I always envied that collection. On the walls were etchings and drawings of semi-famous people, such as Warren G. Harding, whom Van considered one of America’s better presidents (probably because Harding was a distant relation)!

There was also his diploma, which I believe came from the University of Missouri, which, for those who don’t know, has one of the most prestigious journalism schools in the country. He also had a bachelor’s from Dartmouth. Yes, for all his country charm and his quiet demeanor, Van was a very sophisticated and highly trained journalist.

He loved to read opinion pieces and if I’m not mistaken subscribed to several newspapers so that he could read his fill. This was before the abundance of opinion pieces now available on the Internet. Of course he LOVED writing inflammatory editorials, editorials that were designed to make the opposition howl and the people who agreed with him nod and smile. Silly people call the kinds of editorials Van wrote “hate speech.” What it really was, was good, old-fashioned hyperbole-laden opinion writing in a style that Mark Twain and H. L. Mencken would have admired. It was, in short, as American as apple pie.

Van was the founder of about 17 newspapers, including many in Illinois, one or two in Indiana and several in San Diego County, including the Poway News Chieftain, which is still publishing, and some on the coast. He told me that he liked to go into a town and start a paper and when the town grew big enough for the paper to be impossible for he and Marge to publish it, he would sell the paper and move on. A pretty darned good business plan for a veteran journalist, if you ask me.

Van wrote this about himself and the Hamilton Pilot, in Hamilton, Indiana, where he styled himself “the skipper,” of the newspaper: “Van Quackenbush is a small “5’6”) businessman who operates a small business in a small town. He merchandises news; his enterprise is publishing.” Simple words for a vital function that almost every town and village could benefit from.

Eventually, of course, Van, decided to publish his last paper, and settled in Valley Center to do it. He published it for 15 years, which was just pushing the envelope for the amount of work that he wanted to do, and so eventually he sold it. But he stayed on in Valley Center.

Van loved community journalism and used to preach about the value of reporting good, positive news. That’s what his papers specialized in. He was a strong supporter of local schools and there was no more dedicated booster of the good characteristics of country living than Van. He was a member of the school of newspapering that believes in fighting for its community and of using the newspaper as a force for good.

I was always disappointed that Van was never named Citizen of the Year or given any of the other honors that often accrue to well-known residents of a community. I guess that people who made such decisions thought that he was “just doing his job,” when he gave them a paper week after week that made them proud of their town, and of their kids, schools and farmers. Well, yes, he WAS just doing his job, but in doing his job he fostered an atmosphere in Valley Center that encouraged the volunteerism that this town is justly known for.

The world would be a better place if more towns had Van Quackenbushes in them to run papers. Valley Center is certainly a much better place because he lived here.